Discover all you need to know about the 2021 Geldingadalur volcano eruption in Iceland! Here, you can find many beautiful photographs and fascinating facts about Iceland's most recently active volcano!

Once again, the Land of Ice and Fire lived up to its name when a new eruption started occurring! For nearly a year within the Geldingadalur valley, gleaming lava spurted and flowed from Fagradalsfjall volcano. 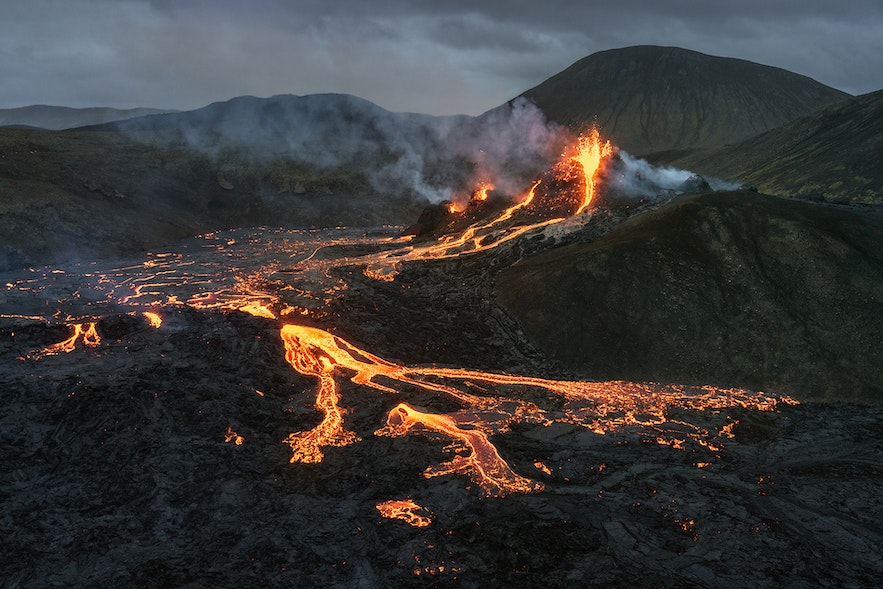 Making this phenomenon even more exciting was its location. The Reykjanes Peninsula is familiar to all travelers to Iceland, as it connects Keflavik International Airport with the country's capital, Reykjavik; the region is also home to the Blue Lagoon. It was the most accessible eruption in Iceland since the country has become a significant tourist destination.

Of course, whenever such an event happens in Iceland, questions arise as quickly as the magma from the earth. Was the volcano in Iceland dangerous? Will it go off again? Could you visit Fagradalsfjall and watch the eruption with your own eyes? Answer all your questions here with this complete guide to the Fagradalsfjall eruption in Iceland!

Starting on March 19th at around 21.30, the much anticipated volcanic eruption at Gelingdalur on the Reykjanes Peninsula began. Initially, it was reported as a fissure up to 700 meters long, with a lava field covering around a square kilometer before it soon formed into an increasingly tall crater.

Although no one knew quite where or when a volcanic eruption would happen, it was inevitable that one would after 53,000 tremors had shaken Reykjavik and its surroundings in the weeks prior. There were no significant injuries despite one of these tremors reaching 5.7 on the Richter Scale and several others getting close. 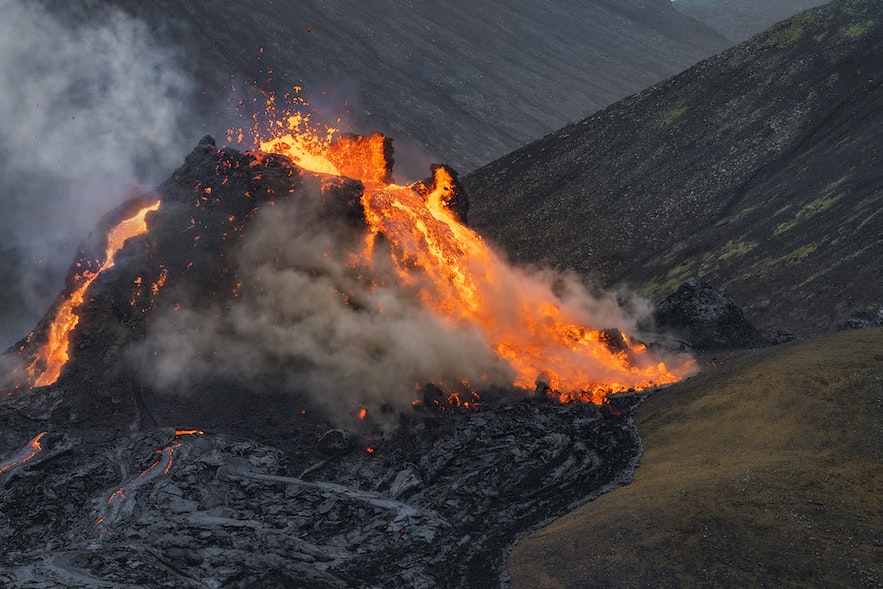 Thankfully, Fagradalsfjall went along the same course. Despite its primordial, terrifying presence, appearing more like Mordor than anywhere earthly, it posed little threat to life, infrastructure, or air travel for two notable reasons.

Firstly, it was an effusive eruption rather than an eruptive one. Lava did not burst from the earth in an explosion of ash, rock, and fire, as happened at Eyjafjallajokull in 2010. Instead, it emerged as an open fissure releasing much more gentle lava flows in the form of molten rivers. 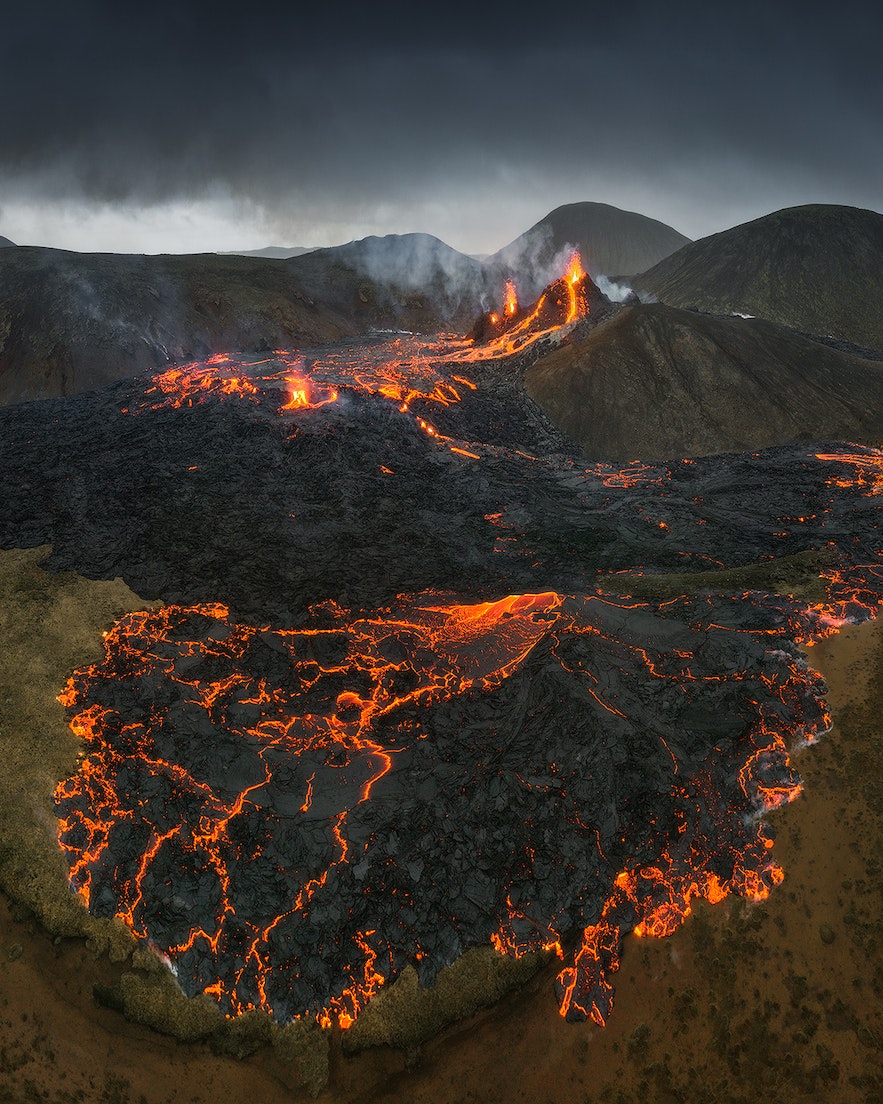 Secondly, the eruption occurred in a sheltered valley. Geldingadalur is mainly uninhabited and without significant infrastructure, making it one of the most convenient places it could have gone off in the region.

That is not to say, however, that it was predictable. Fagradalsfjall changed several times since it first opened, with new fissures and craters forming as the lava field developed. Furthermore, the fountains of fire have significantly varied in their size, sometimes rising just a few meters in the air and sometimes shooting so high that they were visible from Reykjavik. 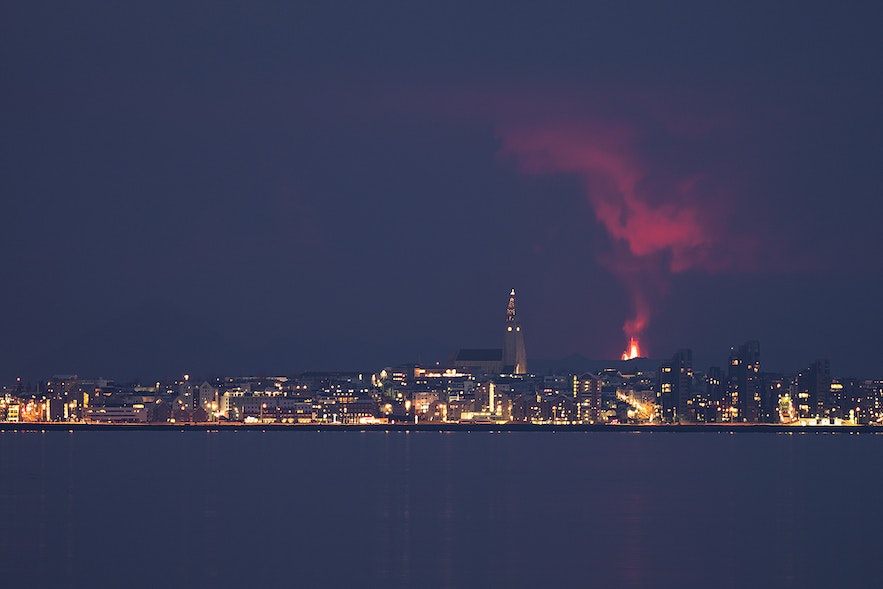 Those with respiratory conditions had to show caution if considering a visit, as the fumes coming from the volcano are by far their most dangerous quality. Even those living in the surrounding towns can exacerbate their symptoms if the winds blow from the eruption site's direction, carrying toxic gases such as sulfur dioxide, carbon dioxide, and hydrogen sulfide.

An interesting note about the Fagradalsfjall eruption - particularly to those fascinated by geology and volcanism - is the qualities of the lava that emerged from it. According to early data, this is the oldest lava that has occurred in Iceland for 7,000 years.

This can be attributed to the deep magma chamber beneath it, usually only found at the bottom of ocean rifts.

Fagradalsfjall slowly stopped erupting towards the end of the year, ceasing activity officially on October 16th. 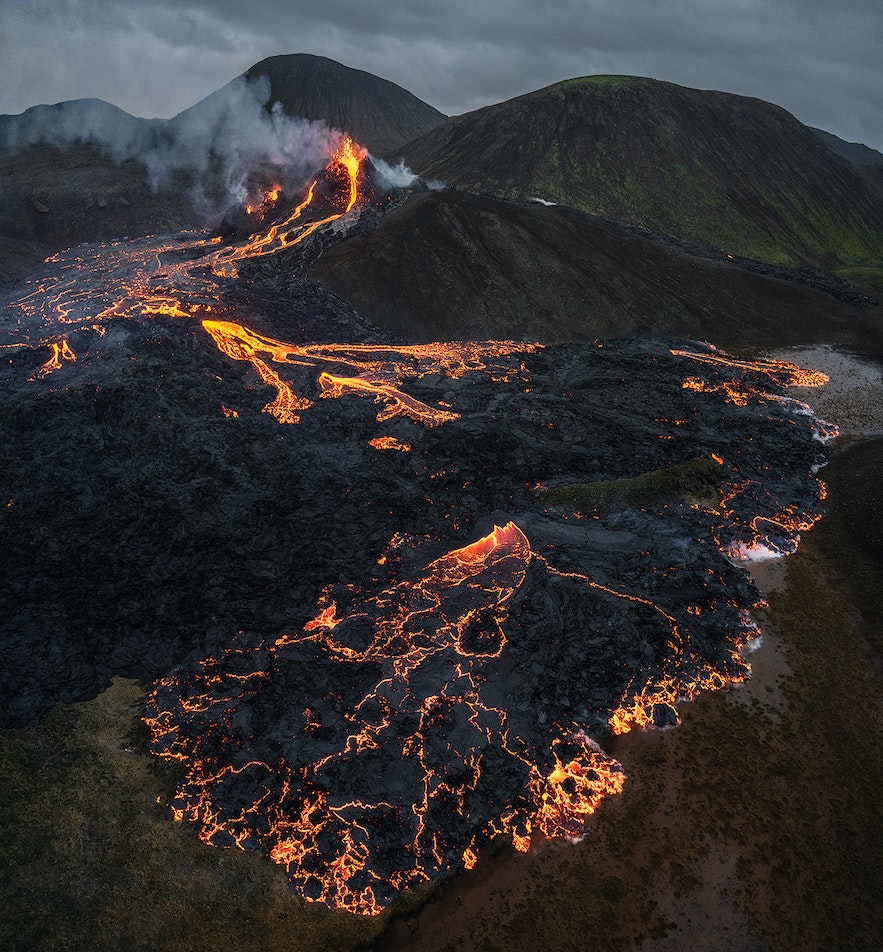 Fagradalsfjall is a very visitor-friendly site!

This hiking tour from Grindavik, for example, will bring you to the edge of the still-hot lava field, exposing you to some of the world's newest earth. 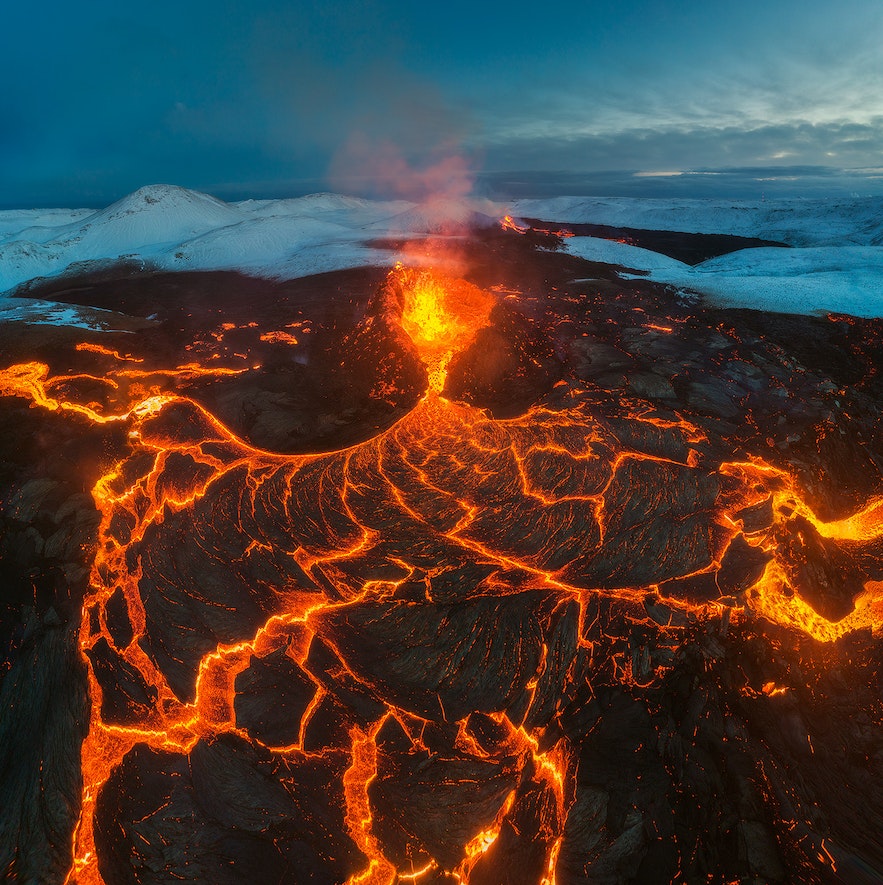 Those who want a more personalized, intimate experience can also organize a private day tour.

While you can visit without an experienced guide, it is not recommended, as no roads lead directly to the site, meaning you'll have to hike for several hours; only certain operators have permission to drive closer. This is challenging for those not knowledgeable of the local area, particularly considering the rugged terrain and cold weather. 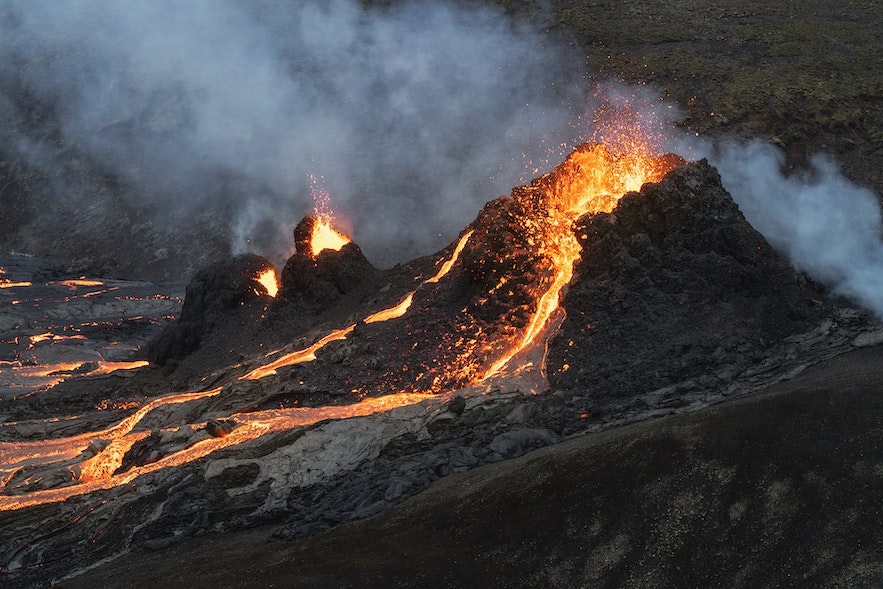 Furthermore, Iceland's tour guides are educated on the risks of the weak, hot lava. They can allow you to get as close as safely possible without relying on oblivious and incredibly dangerous guesswork. Guides also keep themselves informed on any changes to the weather, such as the wind direction, and have the training to respond if the situation turns awry. 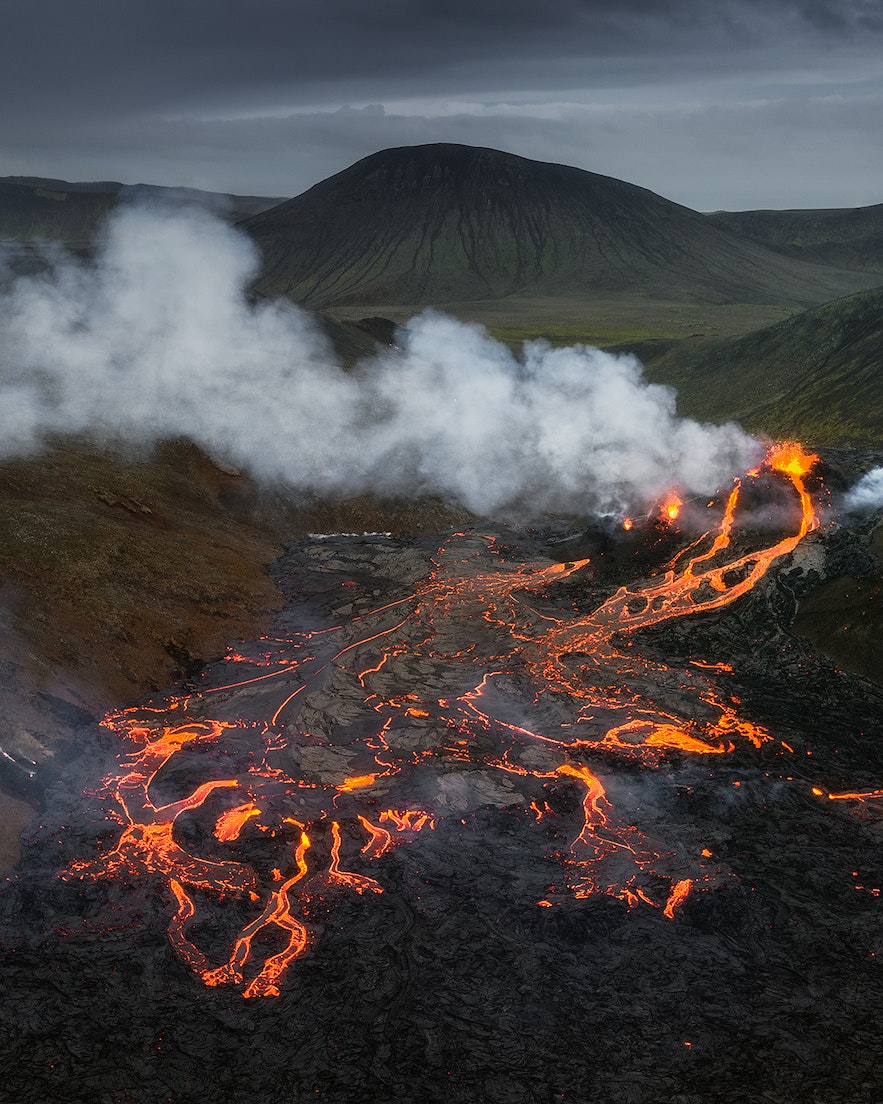 Visiting and marveling over the eruption at Fagradalsfjall was a breathtaking experience that many guests caught on camera. This phenomenon's videos and photographs inspire awe to anyone seeking them online and provide incredible mementos that lucky travelers can treasure for life. 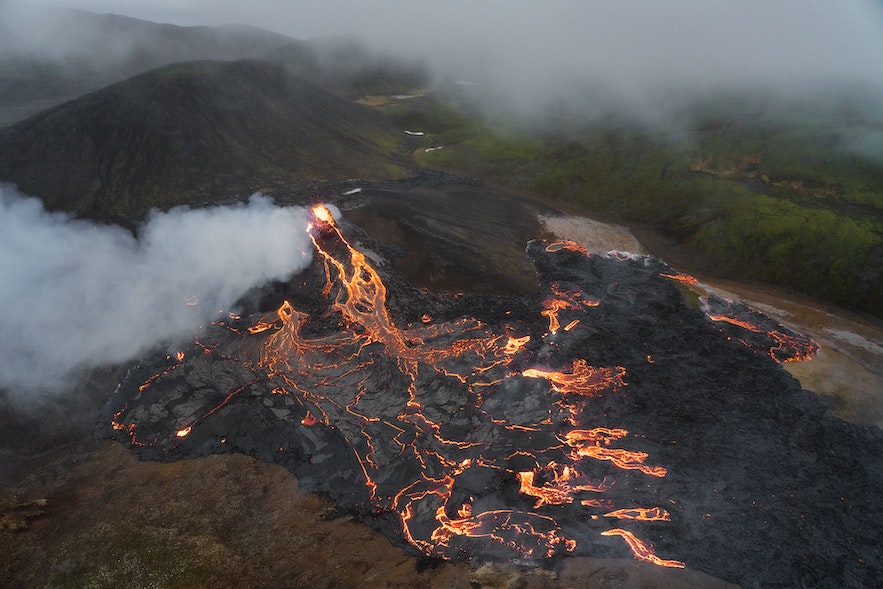 You can still capture the field of fresh lava by visiting the site on foot or flying over it with a drone.

Before rushing to the site with all your technical equipment, know the rules of flying drones in Iceland. While we have an article where you can learn about this in-depth, the main restrictions for their use at Fagradalsfjall are below:

How does Fagradalsfjall Volcano Compare to Other Icelandic Volcanoes? 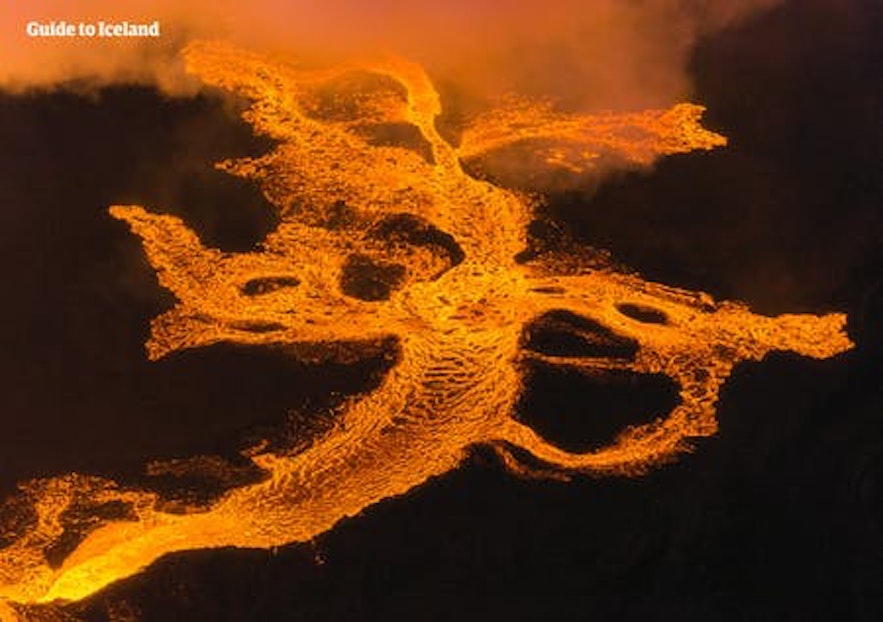 Despite its epic beauty and awe-inspiring power, Fagradalsfjall was not just minor compared to Iceland's recent eruptions; it is practically minuscule. Its predecessors had been pretty dramatic in its defense, but it is a classic example of a minor volcanic event in the country.

Out of all the eruptions that have happened here since 2010, it most resembles Holuhraun. Both were effusive eruptions that opened in a lava landscape rather than beneath a glacier. Holuhraun produced the most extensive lava field that Iceland has seen since 1783, covering an area of over 85 square kilometers and thus absolutely dwarfing its more recent cousin, which covered just 4.8.

Eyjafjallajokull and Grimsvotn, meanwhile, have very little in common with Fagradalsfjall. Both of these were enormous, explosive eruptions that occurred under ice caps, producing a different range of much more severe dangers. They released vast ash clouds that grounded flights and poisoned crops and triggered evacuations in the surrounding areas due to the risk of glacial floods and pyroclastic flows. 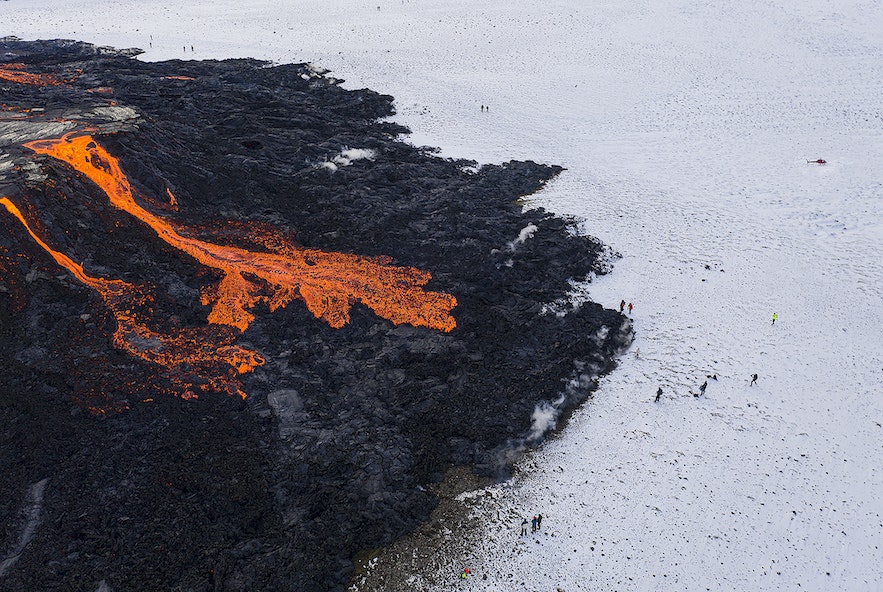 Although the above eruptions were more extraordinary volcanic events than Fagradalsfjall, they lacked easy accessibility. Holuhraun and Grimsvotn are both in the central Highlands, and while Eyjafjallajokull's South Coast location isn't hard to reach, its ash cloud stopped many prospective admirers from getting to it!

Fagradalsfjall's eruption site, meanwhile, was less than an hour's drive from Reykjavik, less than half an hour from Keflavik International Airport, and around fifteen minutes from the Blue Lagoon. 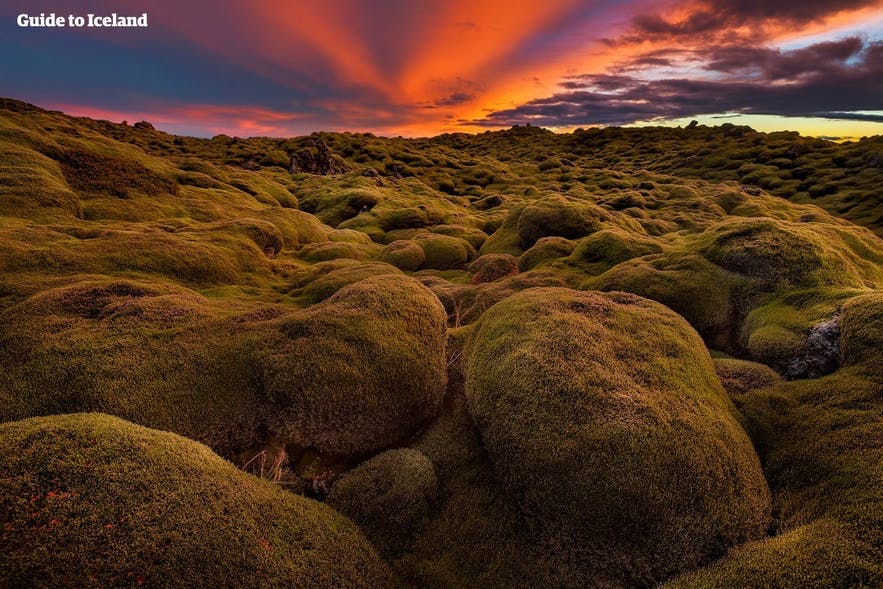 The Fagradalsfjall volcano is a relatively 'young' part of Iceland; all of the Reykjanes Peninsula is. This means that it was only formed by magma rising from the core of the earth recently - that is to say, over the past seven million years. The oldest parts of Iceland in the Westfjords are 16 million years old by comparison, and the oldest exposed land on earth in Australia dates back an incomprehensible four billion years.

This can be explained by the fact that Iceland was formed by a weakness in the Mid-Atlantic Rift, the separating divide between the North American and Eurasian tectonic plates. As these plates pull apart, magma rises to the surface and creates new land. 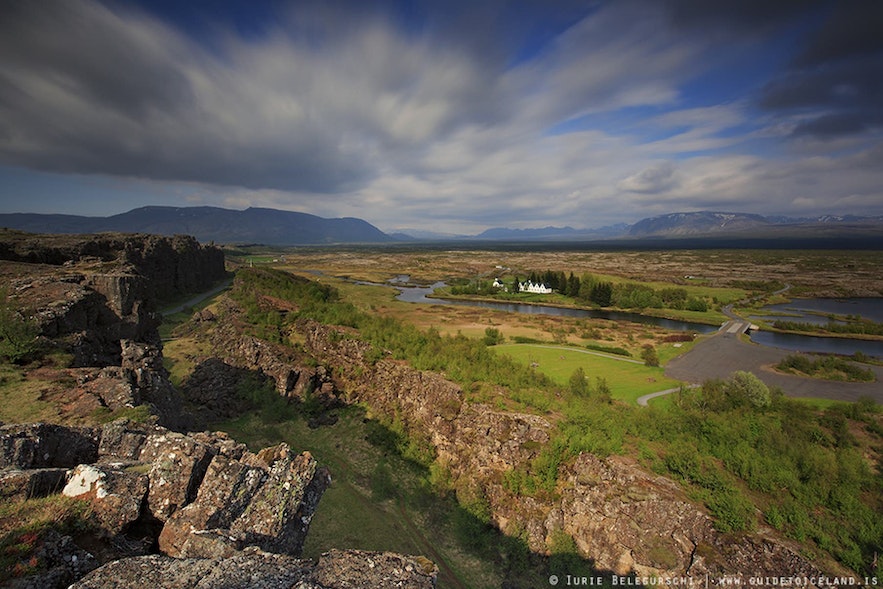 The closer to the Mid-Atlantic Rift, the newer the land, and this valley runs right along the length of the narrow Reykjanes Peninsula. The region is home to the 'Bridge Between the Continents', where you can walk from one plate to the other.

As such, Reykjanes is incredibly volcanic, and this activity is written all over its landscapes. Very little vegetation can grow on the endless plains of lava; geothermal areas seethe and bubble in many different spots, and cone-shaped volcanoes dominate the horizon. Eruptions occur very regularly - although, again, we are speaking in geological terms, as the last was 800 years ago. 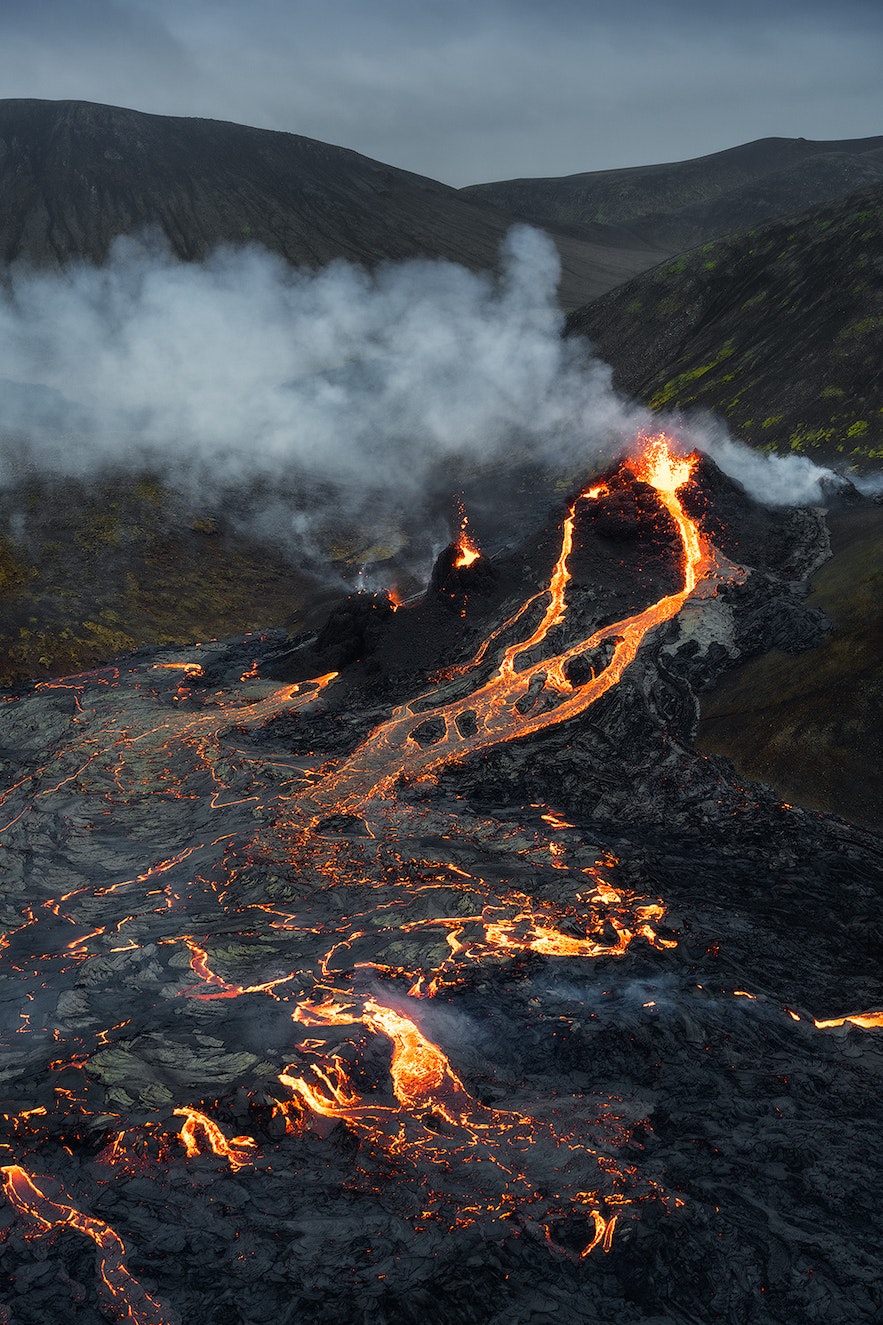 Geldingadalur had not erupted for 6,000 years before 2021, although there had long been a magma chamber here. Many of Iceland's volcanoes exist this way, lying dormant until an unexpected fire and fumes are released.

The eruptions that have formed the Reykjanes Peninsula landscapes have defined the region's way of life for centuries. It became a center of the country's fishing industry for early Icelanders as settlers could not grow food or feed livestock on the lifeless terrain. 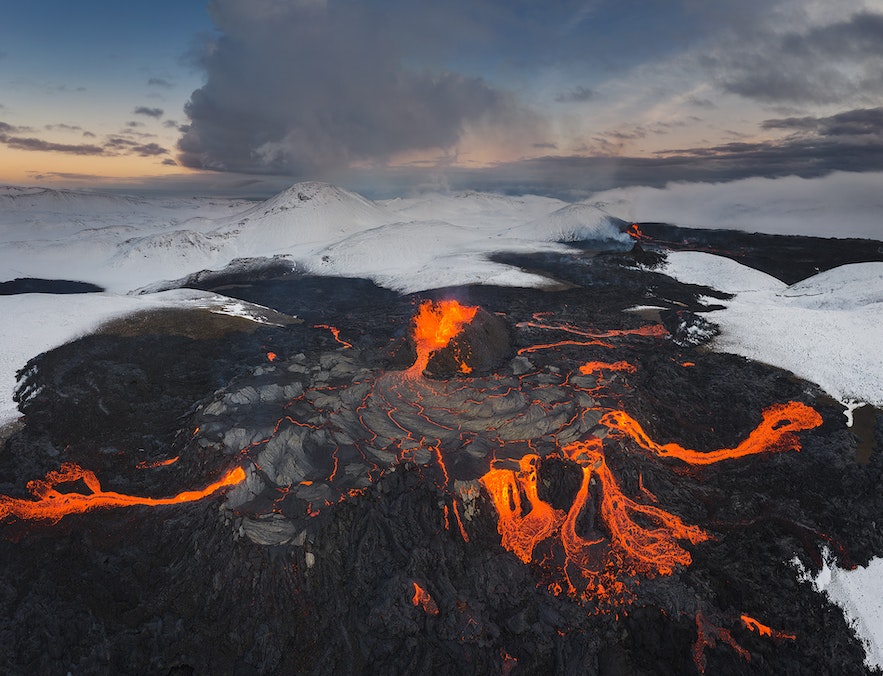 More recently, the volcanism of Reykjanes has led to a significant number of attractions for tourists to the area.

For example, you can embark on adventures into lava tunnels, quad bikes across black sand beaches, and enjoy relaxing, guided sightseeing tours! 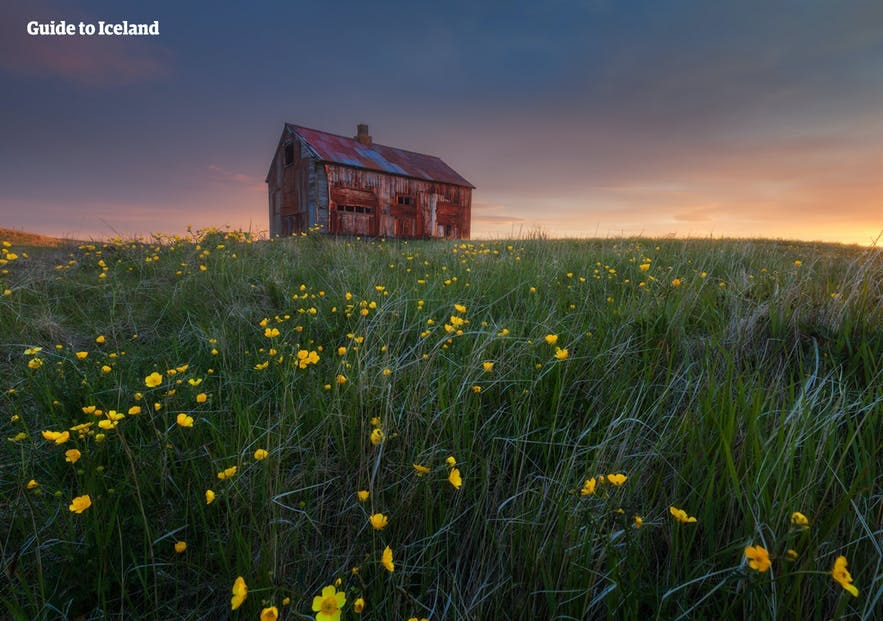 Fagradalsfjall has mainly remained uninhabited since settlement; the nearest town is Grindavik, about seven kilometers away. This is because of steep-sloped valleys, which essentially prevent the area from being easily accessible. Furthermore, its inland location was useless to the fishing communities who relied on the seas to survive.

Little-explored places such as Geldingadalur, however, had an enormous impact on the history and culture of the Reykjanes Peninsula. The region's folklore of elves, ghosts, and witches are heavily inspired by the misty, desolate, and dangerous landscapes that the volcanoes have created. 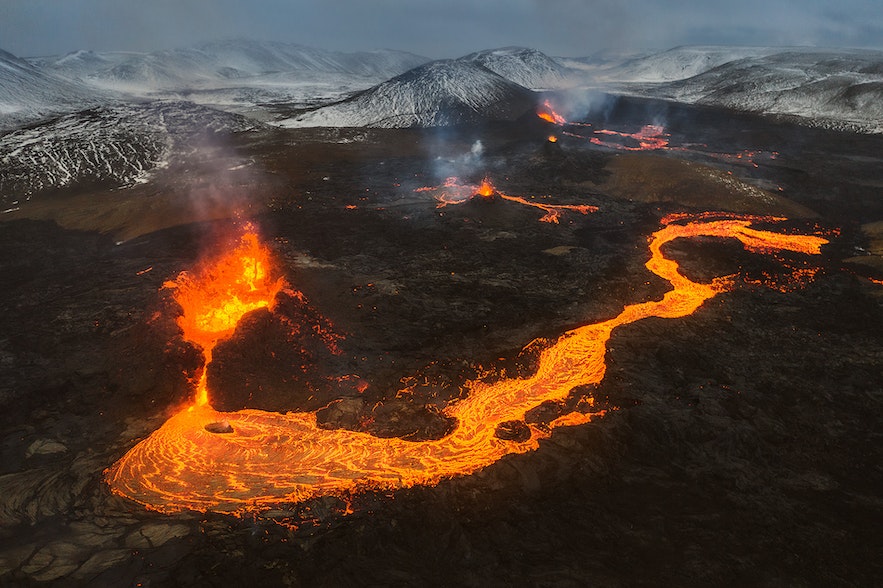 Places such as the ruins of Selatangar, the hot springs of Gunnuhver, and the troll pool of Brimketill are all steeped in fascinating fables.

Aside from its recent eruption, Fagradalsfjall has its own story in Iceland's history, although the tale is true and tragic. In 1943, during the Allied occupation of the country during World War Two, the famous bomber plane 'Hot Stuff' was caught in bad weather during a mid-Atlantic fuelling stop and crashed into the mountainside.

Fourteen of the fifteen passengers on board died, including Frank Maxwell Andrews, the US Army Air Forces founder, and a decorated Lieutenant General.

Andrews has plenty of monuments to his name across the world for his work in both World Wars, and there is one dedicated to him and the plane's other victims at Fagradalsfjall, erected in 2018.

Future of the Fagradalsfjall Volcano 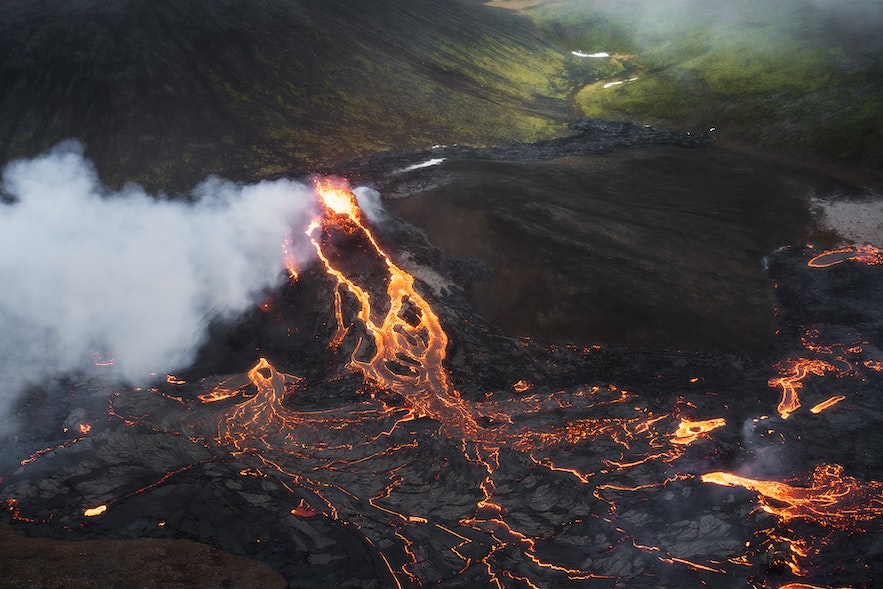 Due to its unfortunate overlap with the Covid-19 pandemic, many were unable to make the journey to witness the eruption. Fagradalsfjall may erupt again, though no one knows when; it is still being monitored closely. Some believe its activity marks the beginning of a chain of events along the Reykjanes Peninsula, although this is speculation. 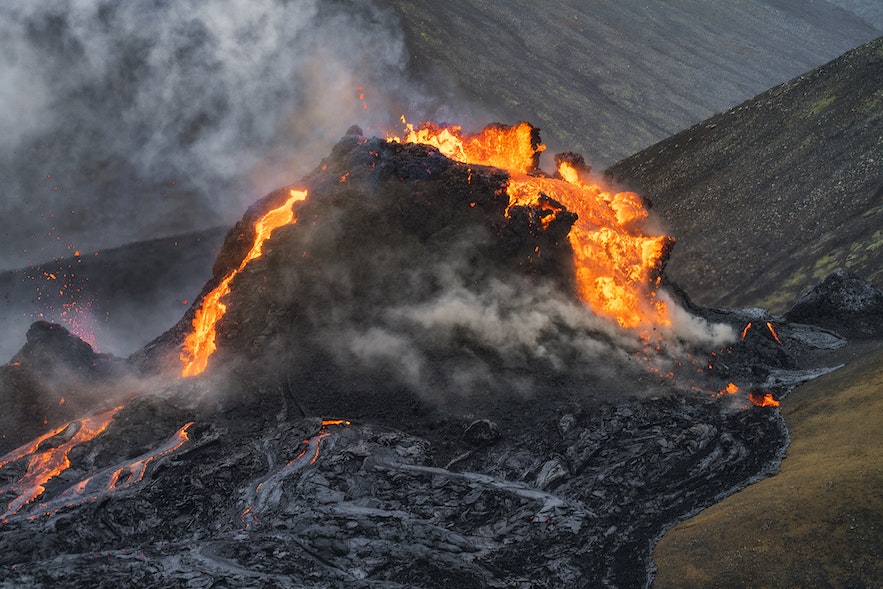 If seeing an erupting volcano is on your bucket list, it's always good to keep an eye on Iceland. The gap between this eruption and the country's last, at Holuhraun in 2014, was notably long, with new volcanic events usually occurring every few years. Grimsvotn's eruption, for example, was just three years before Holuhraun, and Eyjafjallajokull just a year before that.

Katla, Bardabunga, and Grimsvotn again are all considered overdue and under constant surveillance. 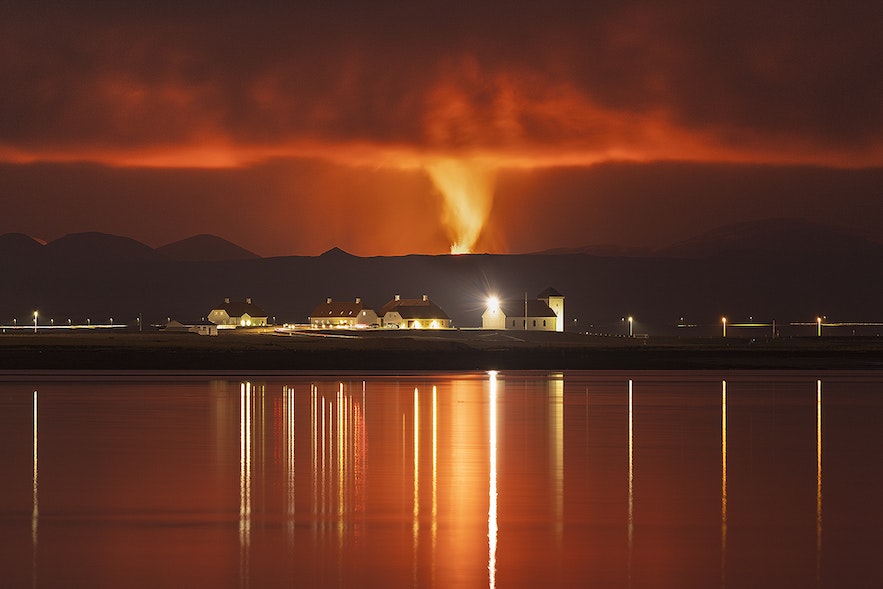 Do you have any more questions about the eruption at Geldingadalur? Have you seen the volcano for yourself? Let us know in the comments below!