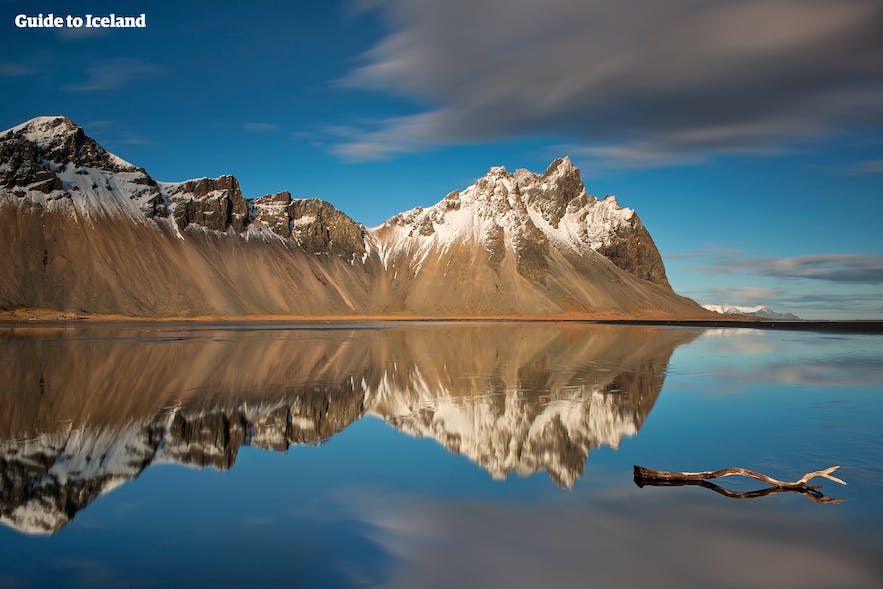 An abundance of enticing options can make it hard to plan a trip. So rather than attempting to see and do it all, add at least one of the following 5 musts to your to-do-list. 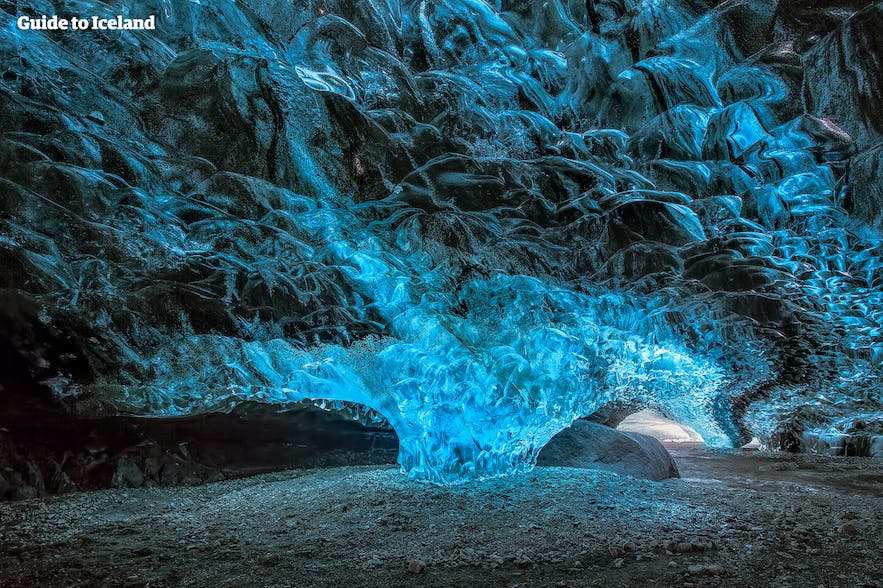 Each summer, subterranean glacier rivers tear and cut through the ancient ice cap that is Vatnajökull, the largest and most voluminous glacier in Iceland, shaping a gigantic underground vascular system of sapphire arteries and crystal blue ice channels.

And in late autumn, when the waters of summer have run their course, a secret natural splendour is left disclosed, and for a wrinkle in time, the mesmerizing Vatnajökull Ice Caves become accessible to man. 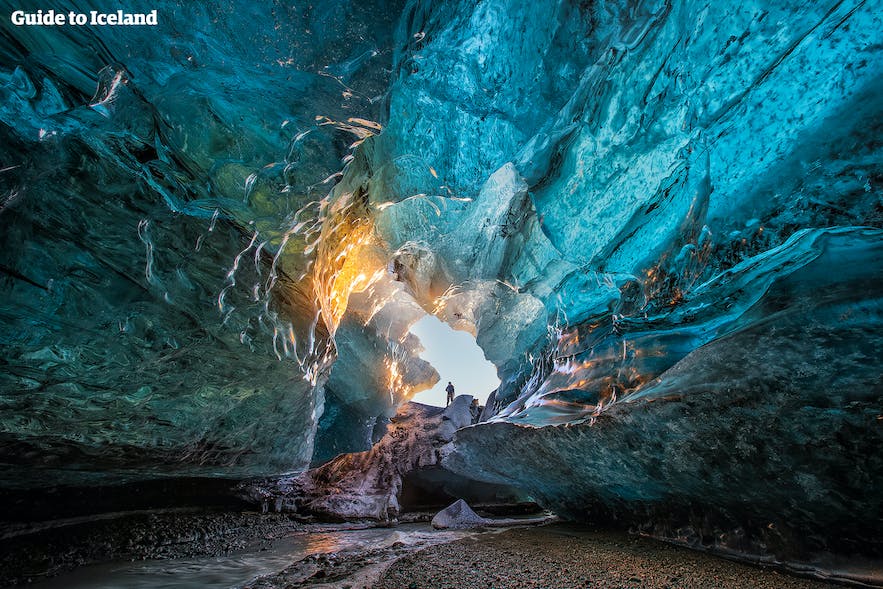 But like a living and breathing organism, Vatnajökull reacts to the rise and fall of temperatures with slow but constant movement, and this steady glacial-motion causes the locations, structures and conditions of the ice caves to change from year to year.

Every fall local guides embark on perilous excursions, braving through the unforgiving landscapes in search of new ice caves, for the single purpose of sharing these entrancing wonders of nature with visitors from all over the world.

When the guides have found what they are looking for and have determined that the caves are safe to enter, they invite travellers to join them on life-changing tours into nature’s frozen cathedrals, where countless shades of white and blue joyfully dance to the mournful howl of the north. 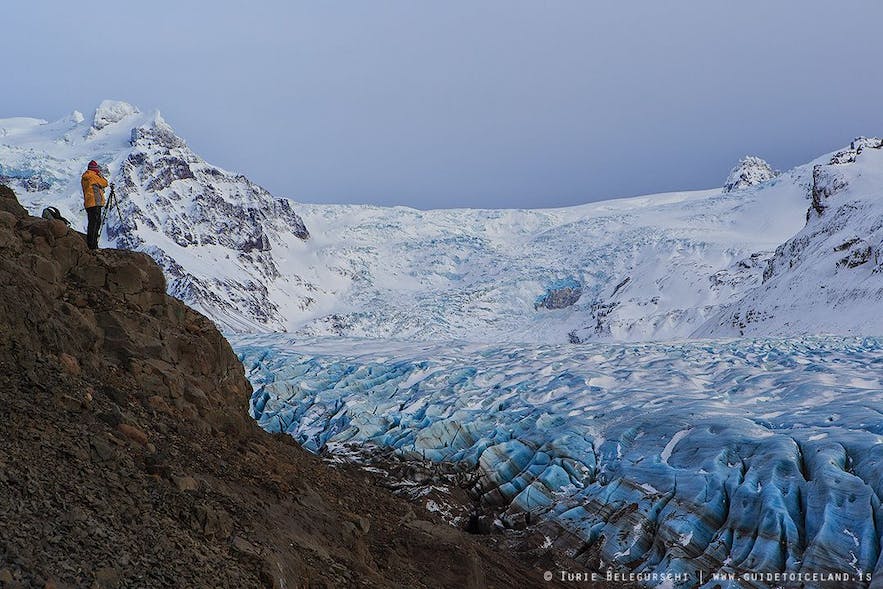 Grim weather and volcanic fury have mercilessly forged the Skaftafell natural reserve for thousands of years, sculpting an otherworldly landscape that is unequalled on planet earth.

And perfectly encapsulating the extremities of the climate, the rugged glacial tongue that is Svínafellsjökull, stretches out of the southern face of the Vatnajökull glacial giant.

A tour to Svínafellsjökull is an excursion of a lifetime, a dreamlike invitation into an enthralling world of fire and frost. Local guides will navigate you through a glistening maze of ice expanses, fragmented by countless yawning canyons of abyssal blue.

When standing on top of Svínafellsjökull, gazing into the unforgiving frozen landscape as the surrounding rumble of breaking ice builds to a roaring crescendo, one can easily imagine oneself to be in a remote galaxy far, far away. 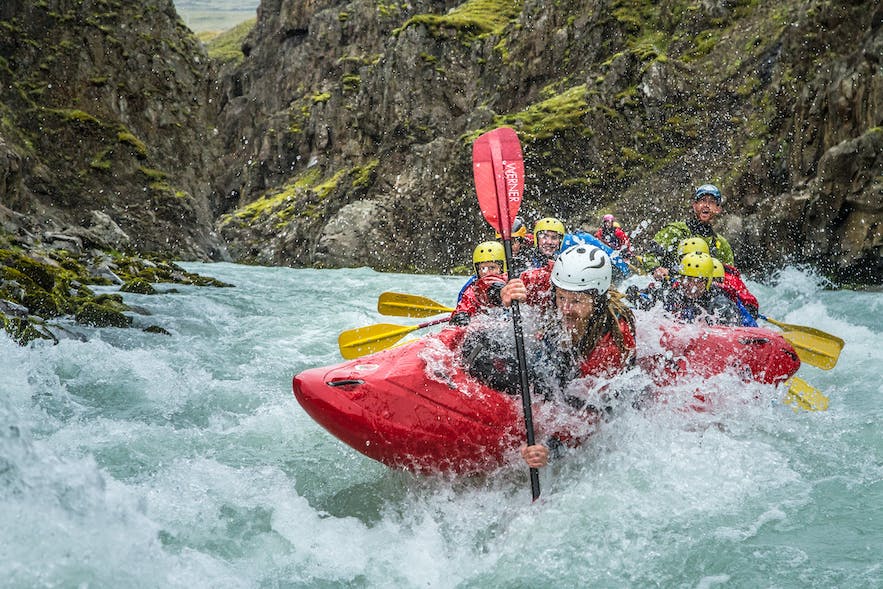 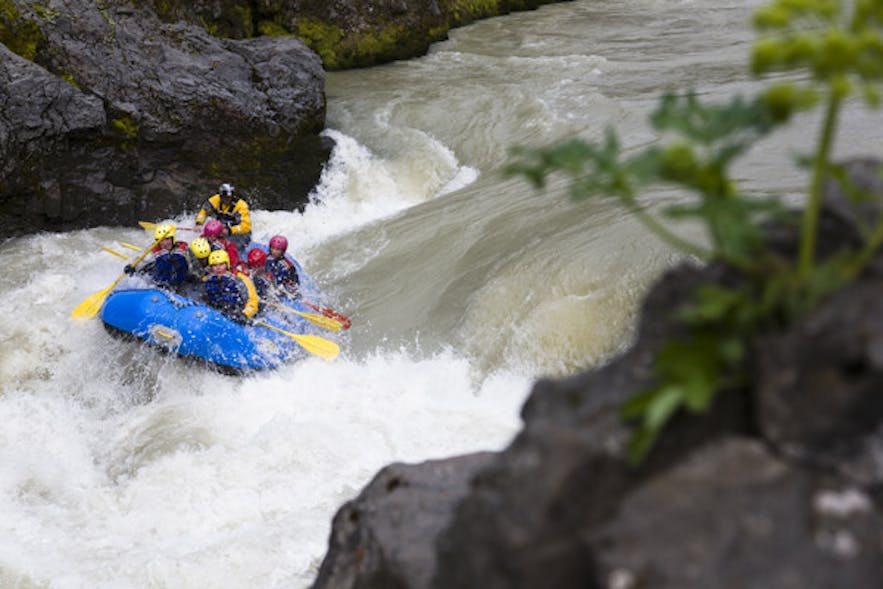 Skagafjörður Valley is the northern drainage for Hofsjökull, Iceland's third-largest glacier, and home to the mighty East Glacial River (Austari-Jökulsá), which diligently carves its way through the rocky landscape, forming deep volcanic canyons on its relentless voyage towards the ocean.

The river is perfectly suited for rafting due to its abundance and variety of whitewater, and for those who brave the rapids, it offers glimpses of an untouched world, flowing through the breathtaking northern wilderness and otherwise inaccessible virgin landscapes. 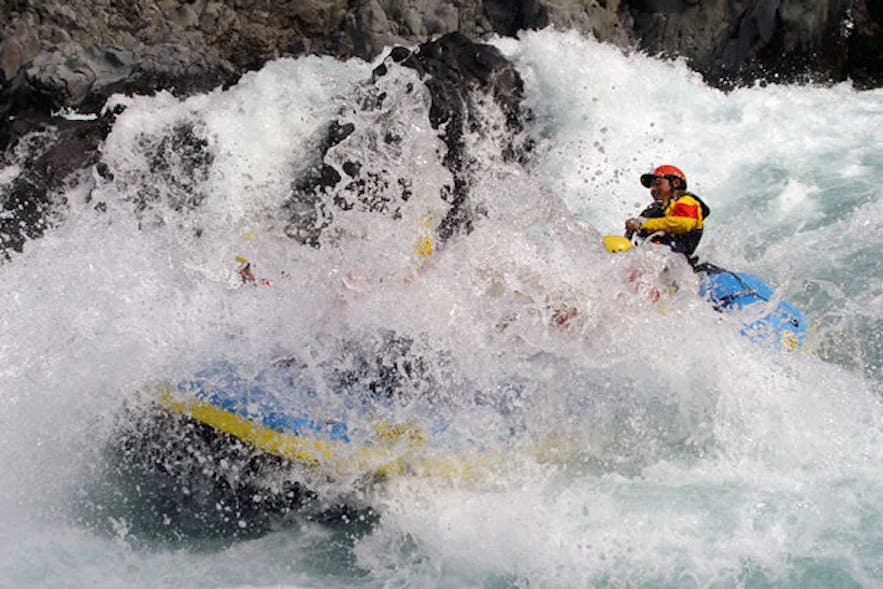 This dramatic fusion of astonishing scenery and adrenaline producing whitewater is what maintains the East Glacial River’s reputation as one of the most thrilling white water experiences in Europe and an Icelandic “must-do” highlight.

An excursion down East Glacial River is both an unforgettable whitewater adventure and a tour into the raw and unbound beauty of the northern wilderness. 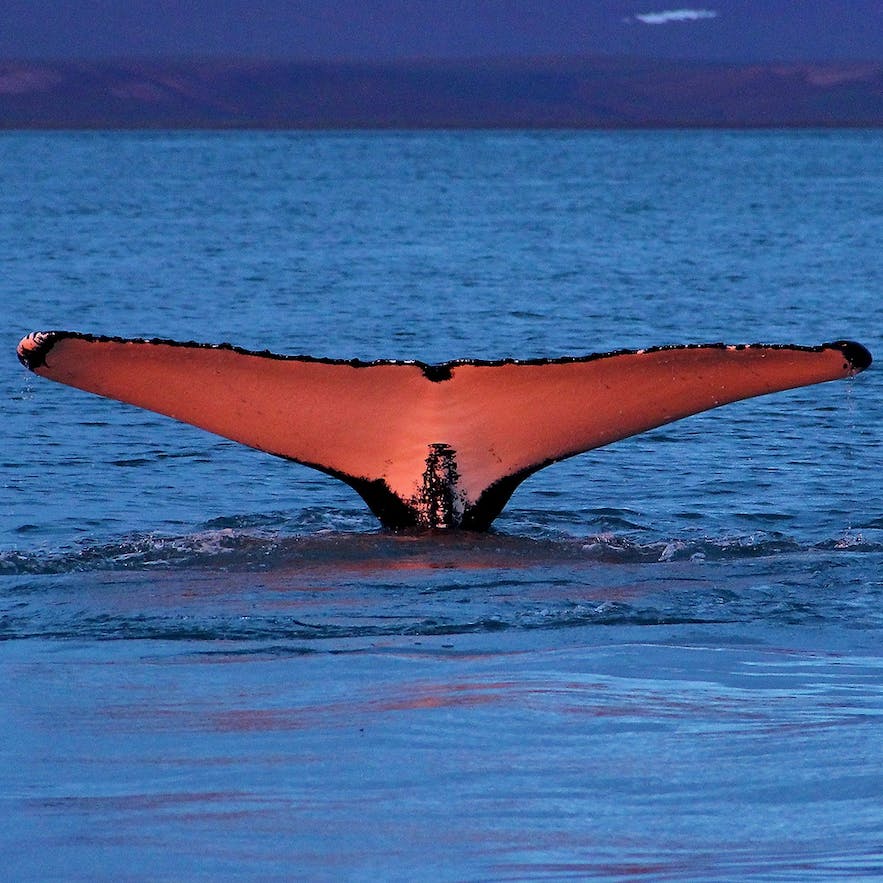 A unique admixture of cold and warm sea currents, shallow waters and abundant summer daylight is what makes Skjálfandi Bay a bountiful feeding ground to which countless species of whales steadily flock to delight in a rich variety of krill and fish.

And over the past decades, the good people of Húsavík have befriended their neighbours in the sea and turned their little north Icelandic town into what is now arguably the whale watching capital of the world.

On a Húsavík whale watching tour, you might encounter the white-beaked dolphin, the harbour porpoise, or the titanic blue whale, but the gentle minke whale is by far the most commonly sighted animal.

Although it is by nature a solitary creature, approaching boats always arouse the minke whale’s curiosity, and this tendency allows explorers to marvel at one of nature’s most remarkable creations from a distance of only a few meters. 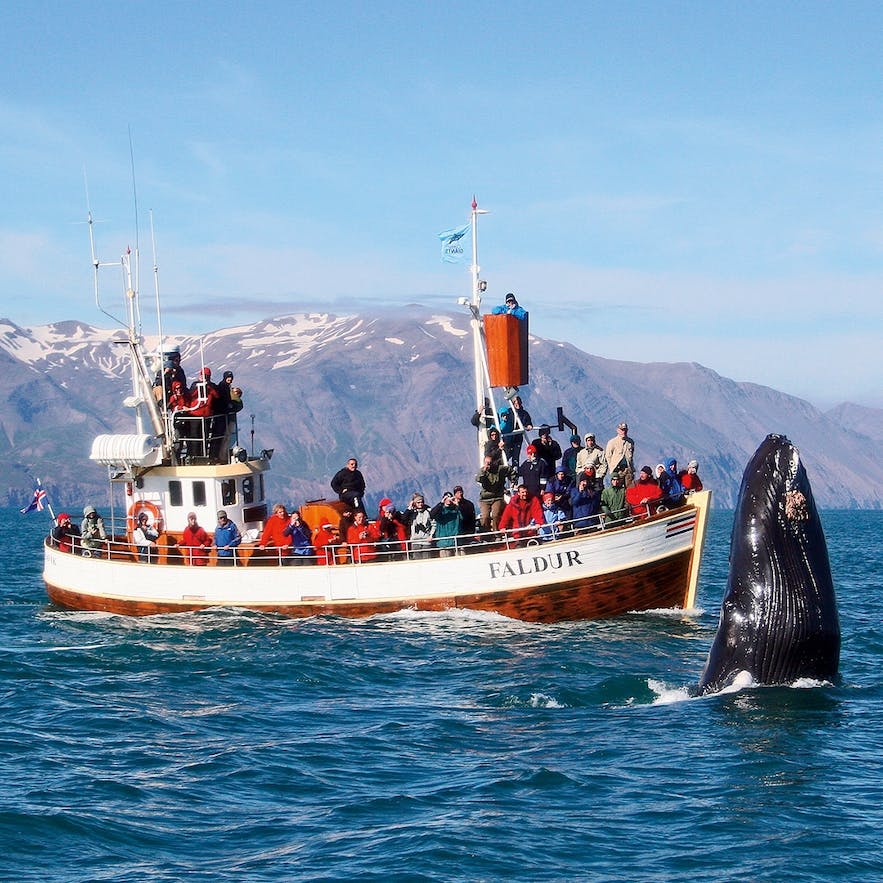 The true heavyweight of the sea, the humpback whale, also frequents Skjálfandi and the chances of seeing one are very high. Although its colossal size commands respect, the humpback whale is an extremely wary animal and hard to approach.

But because of its playful nature, explorers regularly witness this enormous giant as it lunges from the depths of the undersea and performs extraordinary acrobatic feats in midair.

A tour onto Skjálfandi Bay is truly an experience beyond compare, where explorers come face to face with gentle marine giants in their natural habitat. 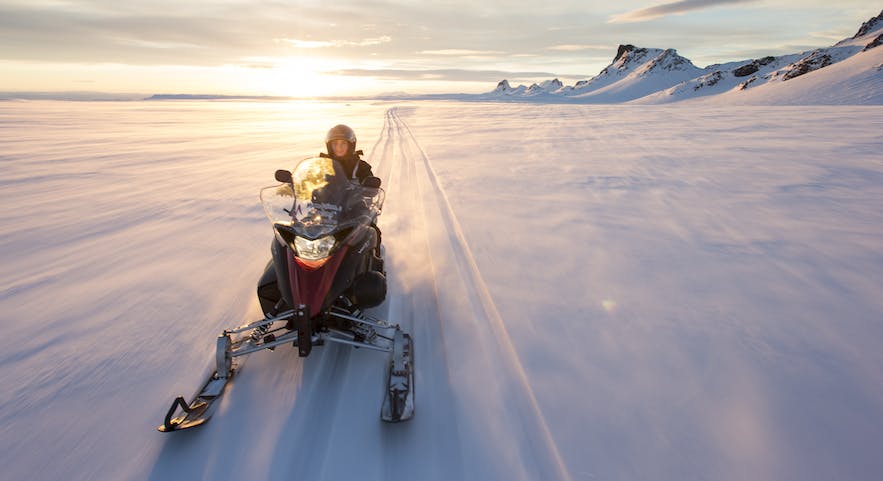 Approximately 120 kilometres from Reykjavík is one of Iceland’s most astonishing and recognisable attractions, the Gullfoss (Golden Falls) waterfall.

This staggering force of nature cascades over 30 meters into the ever-hungry gorge below, where on sunny days the billowing water spray climaxes into the celestial golden hue from which Gullfoss takes its name. 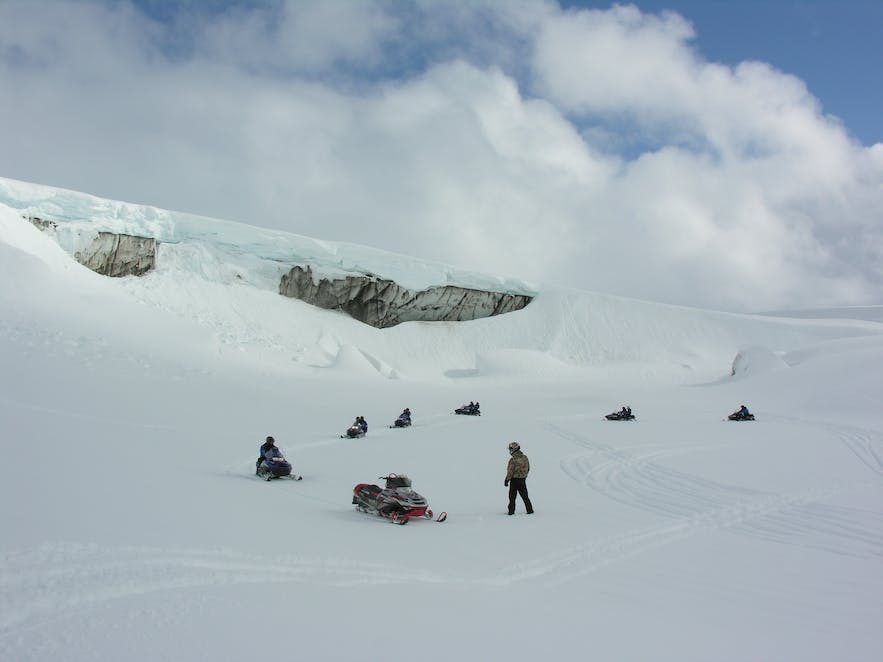 Gullfoss is fed by the Hvítá glacial river, which flows from the mighty Langjökull, Iceland’s second-largest glacier. Langjokull has long since become Iceland’s most popular snowmobiling area, and now you can top your visit to Gullfoss off with a snowmobile ride on the magnificent ice cap.

You will be picked up at Gullfoss by a super truck and transported across the rough terrain to the Langjökull basecamp. From there expert guides will take you on an unforgettable voyage across the glacier vastness, after which you will be transported back to Gullfoss.

The snowmobile tour from Gullfoss offers travellers the best of both worlds, allowing them to experience the marvel that is Gullfoss and explore the very glacier from which it originates.