People travel to Iceland for many reasons, though the vast majority will readily admit that it is the country’s natural beauty that first attracted them to come here. Be it the gnarled mountain ranges, the billowing geothermal vents or the tumbling waterfalls, it is Iceland’s untouched and undeveloped wild side that has helped reached out to the hearts and minds of millions of travellers worldwide. 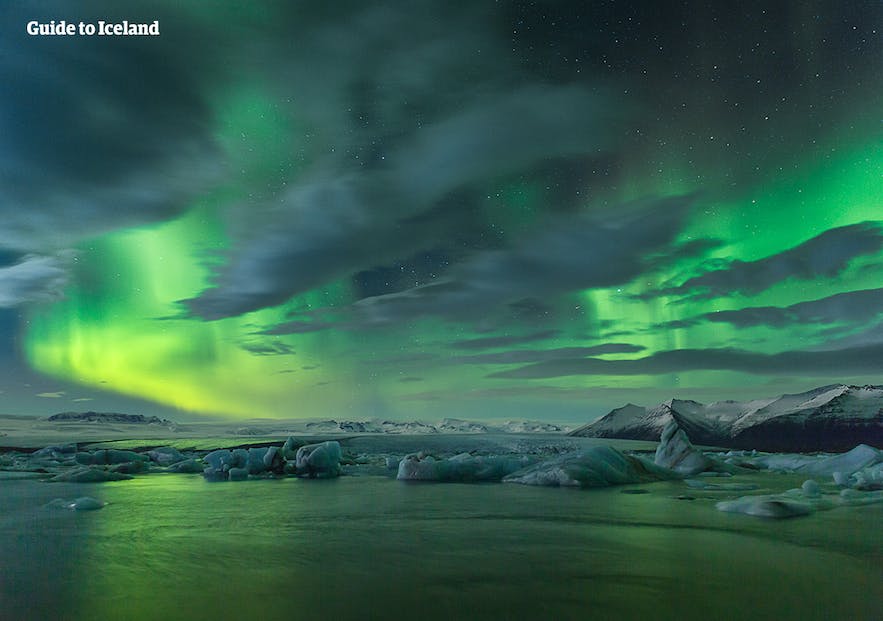 One particular draw is the possibility—and it’s only ever a possibility—of seeing the Aurora Borealis, otherwise known as the Northern Lights. The Northern Lights are a natural light display, a phenomenon that occurs when the magnetosphere is disrupted by solar winds, causing light particles to ionise and thus emit energy of varying colour patterns as they move into the upper atmosphere of the Earth’s magnetic field.

But don't worry if that sounds too complicated... not many people are dwelling on the science behind the aurora as they're looking up upon those dancing, dazzling waves of green, purple and pink. 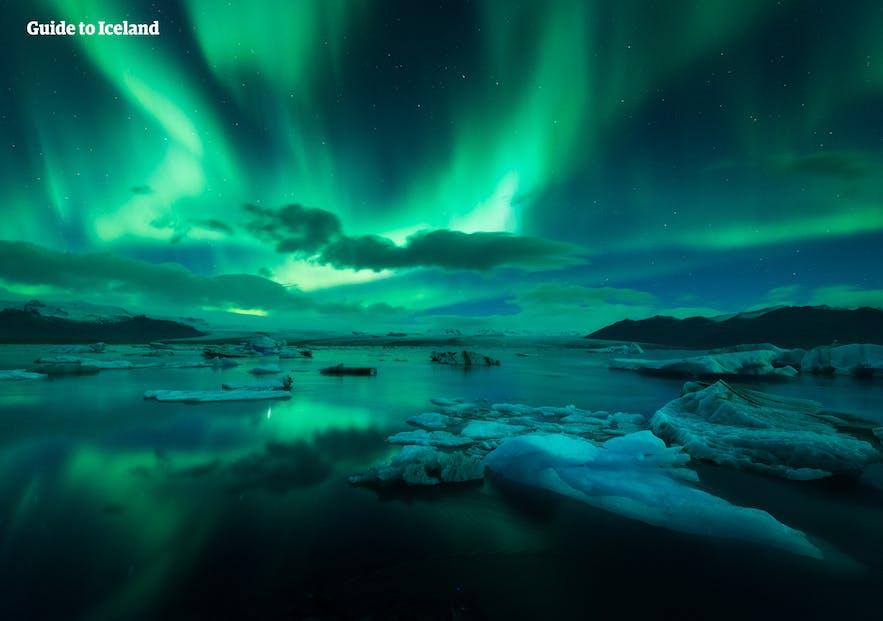 Experienced northern lights hunters will quickly tell you that the best chance of seeing this dazzling solar light show is away from the light pollution of urban centres.

Thankfully, Iceland has dark open spaces in abundance, but to truly make the most out of this bucket-list experience, committed travellers will want to ensure their environment matches the aesthetic beauty above. For that, there is only one place, Jökulsárlón glacial lagoon.

Jökulsárlón is colloquially referred to as “The Crown Jewel of Iceland” because of its staggering, visceral appeal and unofficial title as the South Coast’s final sightseeing attraction.

Enormous icebergs break away from the glacier tongue, Breiðamerkurjökull (originating from the far larger icecap, Vatnajökull), falling into the lagoon where they float idly, crunching into one another as seals and seabirds fill the scene with life.

Jökulsárlón is Iceland's deepest lake, measuring at 248 metres depth, and been growing larger every year as the effects of climate change continue to decay the country's fragile glaciers. It is thought that in a century's time, the location of Jökulsárlón will instead be a newly formed fjord. 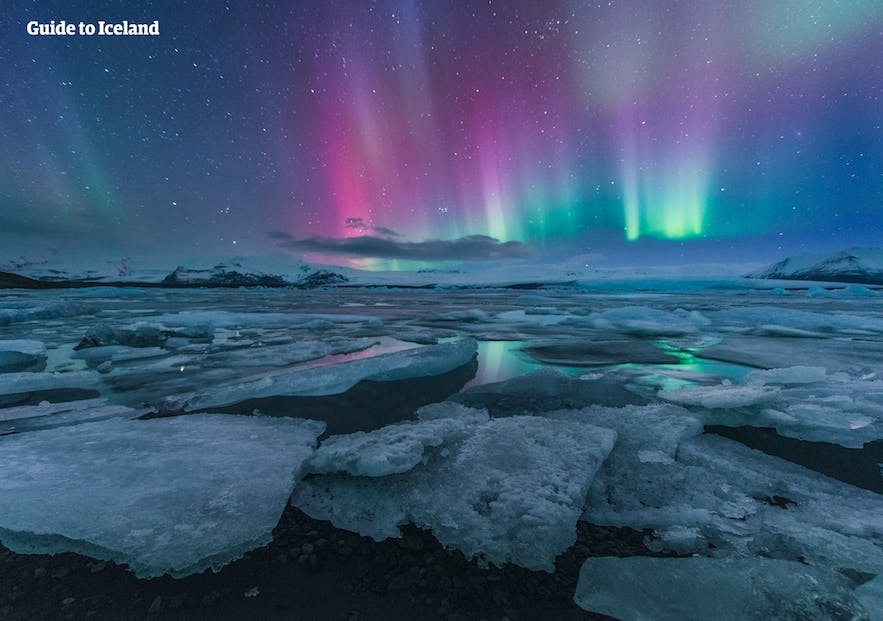 Whilst some visitors choose to partake in an exciting Zodiac boat tour, an experience that allows them to get within touching distance to the icebergs, others choose merely to sit on the banks of the lagoon and allow this surreal, frozen scene to play out quietly in front of them. In this sense, Jökulsárlón glacial lagoon is one of the optimum locations in the country for those travellers seeking solitude, tranquillity and untouched nature.

Given that Jökulsárlón lagoon is found in Vatnajökull National Park, the second largest nature reserve in Europe, the entire surrounding landscape is superb, a collage of steep mountain slopes, freezing crevasses and lush vegetation, only adding to the location’s appeal.

And without any urban development in the immediate area, Jökulsárlón has become one of those destinations that Northern Lights hunters dream about, a spot of suitable darkness where it impossible to tell whether the sky or the earth is the more dazzling scene. For that reason alone, Jökulsárlón is considered unsurpassable when it comes to looking out for the aurora. 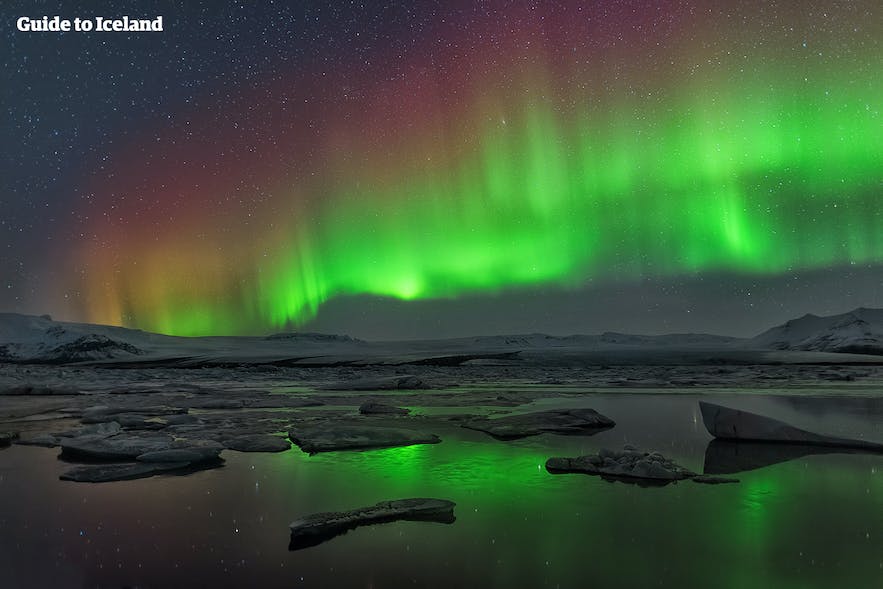 As with almost all natural phenomena, there is no exact telling as to when the Northern Lights will appear; they are, after all, notoriously elusive and unpredictable, sometimes lasting hours, sometimes little more than two minutes. To catch them hovering above you is a blessing, but there are ways to help manifest such an experience into reality.

One of the best ways to ensure that you see the Northern Lights is to take the responsibility out of your own hands somewhat and, instead, opt for a guided tour or package with a certified Northern Lights operator.

Not only are such tour providers vastly experienced and knowledgeable when it comes to knowing the best spots and times to see the Aurora, they will also provide a wealth of information and bonus activities otherwise unavailable to the autonomous traveller.

For example, this 2-day tour to Jökulsárlón glacier lagoon also includes a spot of glacier hiking, one of the most thrilling and authentically Icelandic experiences available—and who knows, perhaps you'll even see the Aurora appear as you descend from your position on the ice cap?

For those who would like to spend longer in the area, a 3-day tour to Jökulsárlón with ice caving is also available, offering something a little different than mere sightseeing. 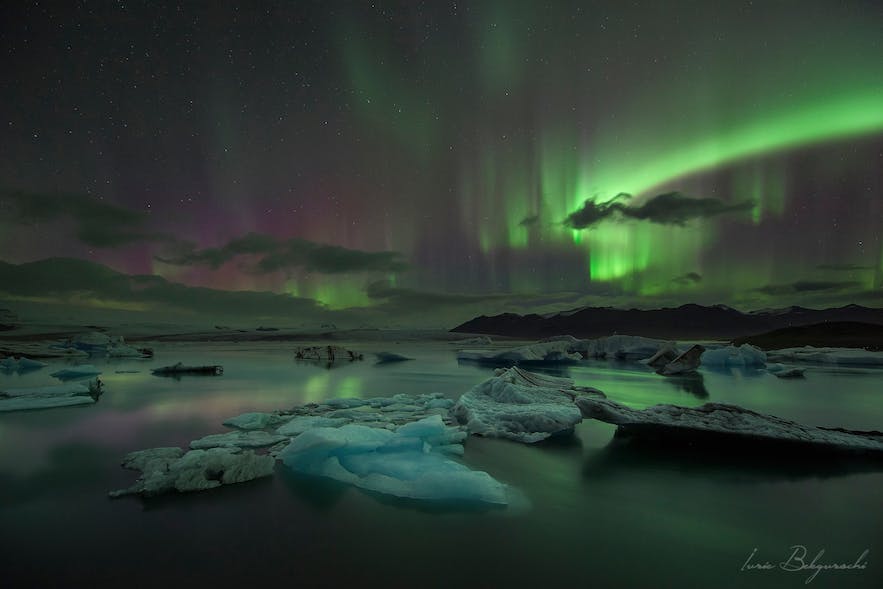 The ice caves are only accessible on guided tours between either mid-October or November and March each year when the weather is suitably cold enough for the caves to maintain their structure. However, you can see the auroras from between September and April, leaving plenty of opportunity for those looking to tick the Northern Lights from their bucket list.

And quite frankly... that should be everybody.

For the very best of winter activity in Iceland, check out the following 5-day winter package. On this multi-day experience, you will have the opportunity to tour to the glacier lagoon, Jökulsárlón, explore some of the country's dazzling blue ice caves, experience the famed sightseeing route, the Golden Circle, and even pay a visit to the warm and soothing waters of the Blue Lagoon, the perfect way to cozy up after a week of frozen adventures.

Naturally, if you're lucky enough to catch the Northern Lights at Jökulsárlón, you will, by default, also be seeing them from the nearby Diamond Beach, only five minutes walk away from the lagoon.

This strip of coastline is named after the hundreds upon hundreds of glittering icebergs that wash up against the beaches black sand, thus decorating the area like an all-natural tiara.

The Diamond Beach is the final exit point for icebergs in the lagoon until they drift off into the Atlantic Ocean. Visitors here can actually follow this all-natural process, providing a fantastic insight into the water cycle that has so come to define this country. 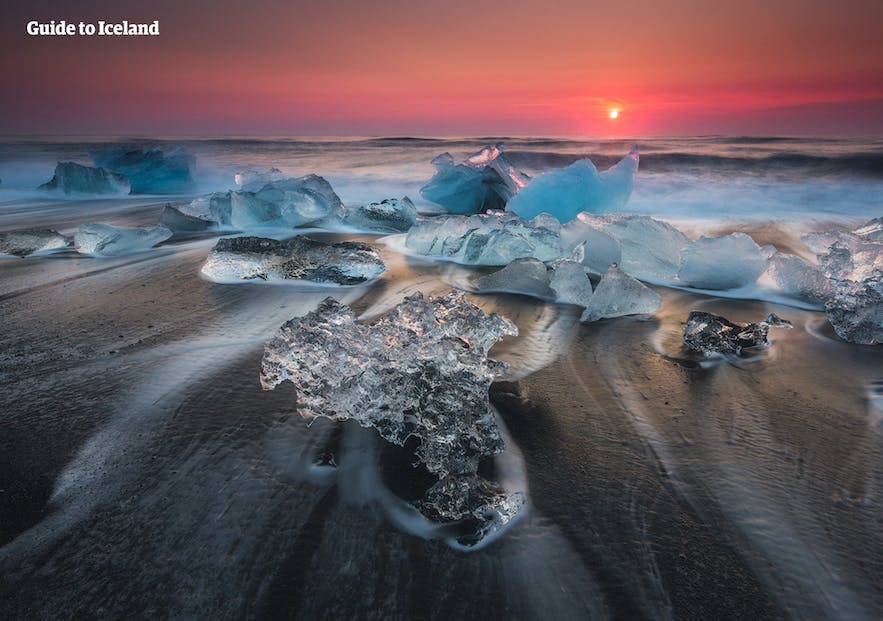 So, if you're looking to visit Iceland during the dark, cold, yet sublimely beautiful winter months, make sure to focus your attention on catching the Northern Lights at Jökulsárlón glacial lagoon, the ultimate vantage point for looking deep into that mystic and mysterious cosmos.

The experience is sure not to disappoint.

Did you enjoy our article about the Northern Lights at Jökulsárlón Glacier Lagoon? Did you have the chance to experience either during your stay in Iceland? How was your Northern Lights experience this winter? Please, feel free to leave your thoughts and queries in the Facebook comment's box below.