Lomagnupur mountain is a breathtaking colossal rock on the South Coast, known for being one of the most recognizable mountains in Iceland.

Several self-drive tours will take you to the Lomagnupur mountain, such as the 9-Day Northern Lights Winter Tour and the shorter 4-Day Summer Self-Drive Tour with South Coast. Travelers have the opportunity to see this attraction because it is along the ring road tourist route.

The stunning rock mountain is a favorite amongst photographers because of its dramatic cliffs and picturesque surroundings, from glacial rivers to an expanse of black sands.

Composition and Features of Lomagnupur Mountain

Lomagnupur mountain, spelled Lómagnúpur in Icelandic, stands 2506 feet (764 meters) at its highest peak, while its shorter cliffs reach 2204 feet (671 meters). It may not be as towering as other mountains in the land of fire and ice, but it easily stands out on the plains of the South Coast.

One of the most striking features of the attraction is its flat peak, estimated to be over a million years old. This plateau is mostly of palagonite composition, a volcanic mineral that forms when water and volcanic glass mix. Its origins are most likely from volcanic eruptions underneath the Ice Age glaciers.

On the other hand, the bottom layer of the Lomagnupur is even older than its flat peak. Studies estimate the moss-covered base, made of layers of lava and sediments, to be around  2.5 million years old.

Meanwhile, the forefront of the mountain, also locally known as the “nose of Lomagnupur mountain” (Lomagnupsnef), was formerly a sea cliff from when the sea was farther inland thousands of years ago.

Over the centuries, numerous earthquakes in the region have shaped the current facade of the rock mountain. Its south end contains the most significant rockfall that resulted from a 1789 earthquake. 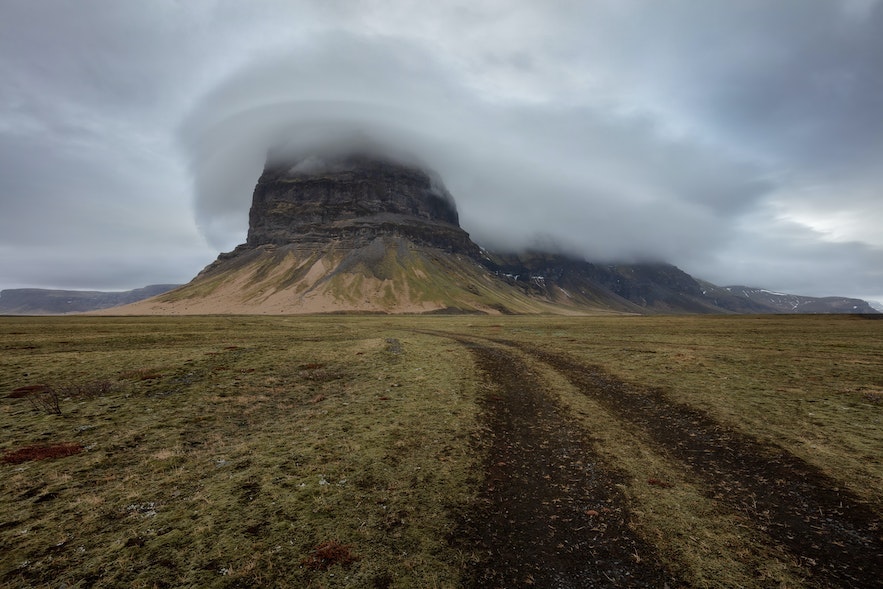 Photographing and Hiking to the Icelandic Mountain

Most tourists just pass through Lomagnupur along the Ring Road to more popular destinations like the nearby Skaftafell glacier. However, the stunning mountain offers two activities that anyone can enjoy, photography and hiking.

On the edge of the vast sand plains of Skeidararsandur, Lomagnupur stands prominently. It is surrounded by the three glacial rivers, Sula, Gigjukvisl, and Nupsa. The contrasting effect of the barren plains, crisscrossed by the rivers and pools of water, makes Lomagnupur an excellent subject for landscape photography.

Furthermore, the top layer of the mountain is occasionally covered with low-hanging clouds. Therefore, if you visit on a foggy day, you can experience excellent cloudscape photography of Mount Lomagnupur.

Similarly, adventure-seekers will find the mountain a challenging yet thrilling spot for Icelandic hiking. The eastern and western sides of Lomagnupur mountain feature hiking trails of steep and rocky slopes. Hikers should consider hiking only on clear and sunny days as the path can be slippery on rainy days.

Once you conquer the long hiking trail of Lomagnupur, you will have access to its broad plateau. This flat peak is an exceptional viewing deck of the whole valley, plains, and distant glaciers.

Lomagnupur mountain is a large part of Iceland’s folklore. A giant named Jarngrimur, who lives on Lomagnupur mountain, figures in South Iceland culture as a wise and prophetic guardian spirit who protects Iceland from invasions.

Furthermore, the mountain is featured in a 13th-century Icelandic saga called the Njals saga. In the saga, a chieftain named Flosi Thorgierson falls asleep on Lomagnupur mountain when he’s on his way to seek revenge against an enemy. In the dream, the mountain giant gives a prophecy that reveals which of Flosi’s men will die in the battle.

In 20th-century Icelandic literature, Jon Helgason mentions the mountain and its giant in a poem called “Afangar.”

He calls to me and calls to you

in a deep and somber voice.”

How To Get to Lomagnupur Mountain on Route One

Mount Lomagnupur is 181 miles (292 kilometers) east of Iceland’s capital, Reykjavik. With its position along Route 1, it is easy to get to the attraction.

Whether you’re planning to make the Icelandic attraction a specific destination or just a brief interlude, you will see its presence long before you reach it as you traverse the South Coast. However, this might not be the case on a cloudy and rainy day, but you can always depend on GPS or online maps.

To plan appropriately for your journey, you may also have a quick stop in the village nearest the rock mountain. Kirkjubaejarklaustur, commonly known as Klaustur, is just 23 miles (37 kilometers) from the attraction. The village has restaurants, hotels, and guesthouses that you can stay at during your Iceland tour.

Once you reach the mountain, make sure not to stop or park on the highway to marvel at the peak. Stopping on the road may disrupt other travelers traversing the ring road. Instead, you may park your car for free on the gravel area near the road, where you can view or hike to the attraction safely and freely.

If you rent a car for a day trip or a self-drive tour around the South Coast, plan to stop by Lomagnupur mountain. For example, you can add the Iceland mountain to your itinerary on this 7-Day Ring Road Self-Drive Tour.

You could also combine your trip to the mountain with a trip to see South Iceland’s most popular attractions like Seljalandsfoss waterfall, Skogafoss waterfall, and Reynisfjara black beach. Likewise, if you’re joining glacier hiking tours in Skaftafell or Vatnajokull glaciers from Reykjavik, you will pass by the beautiful Lomagnupur mountain. 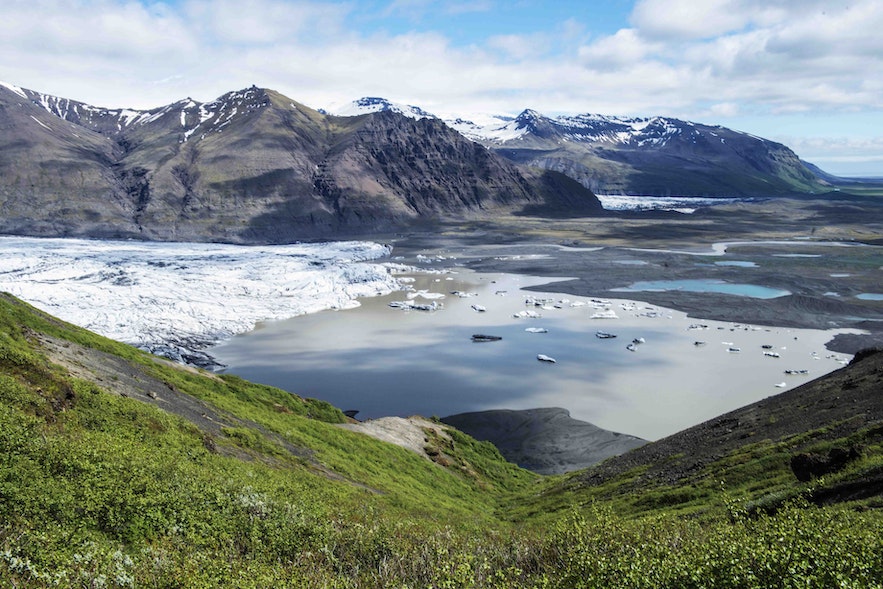 Other Attractions You Will Find Near Lomagnupur Mountain

The surrounding area has a large number of attractions on and just off the ring road, including:

With all these spectacular attractions on the South Coast, an unforgettable experience awaits you in the land of fire and ice.