10 Reasons Icelanders Are Proud of Iceland

Iceland is known throughout the world for its sweeping natural sceneries, rich culture, talented artists and excelling sports teams. Or, at the very least, that's what the people of Iceland would like to believe. Here is a list of 10 reasons why Icelanders are proud of their country―read on and see if you agree!

Be it the robotics of Japan, the FIFA titles of Brazil, the education system of Denmark or the Eiffel Tower of France, every nation in the world has something to be collectively proud of.

When it comes to Iceland, however, you might find that the natives are exceptionally boastful of their listed feats, giving how incredibly few people actually live here. When a nation is this small, the people feel such a connection with their countrymen that you'd think the feats were their own; belonging to everyone instead of the few.

Of course, being mentioned on the Late Show makes everyone in Iceland collectively gleeful

Being a nation of roughly 340,000 people, it’s safe to say that Iceland exhibits a close-knitted sense of community. If anyone from this volcanic island attains fame or fortune on an international level, the entire population is quick to point to those people as a shining example of their country’s excellence.

Whether or not you are planning to travel to Iceland, you might be interested in finding out just which of these feats, things and events the locals take most pride in. At the very least, coming to Iceland with that kind of knowledge will instantly win you a few local friendships!

These noble achievements and native elements are an integral part of what forms the Icelandic identity and psyche, so without further ado, here is a list of the top 10 reasons why Icelanders are proud of Iceland.

1. The Nature of Iceland 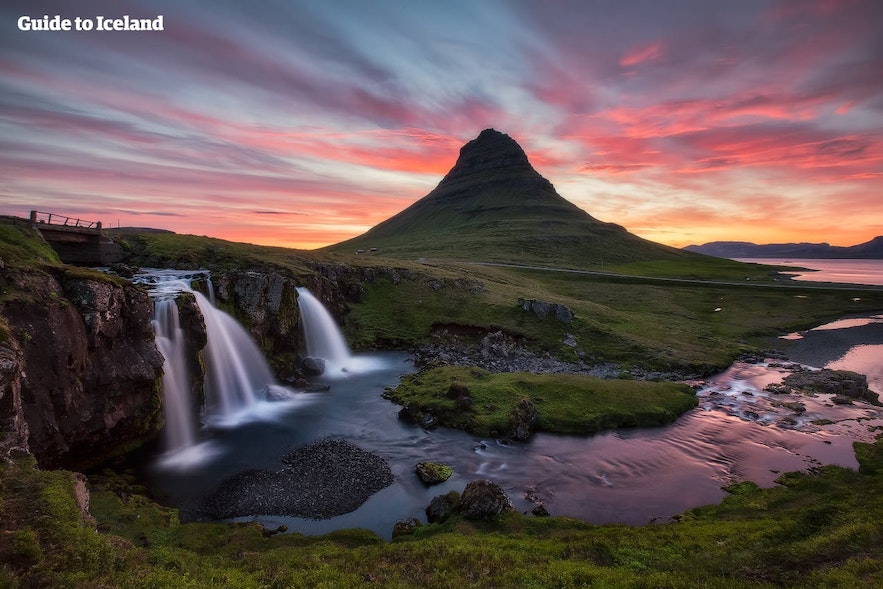 It goes without saying that the incredible nature of Iceland tops this list. The country proudly boasts Europe's most powerful waterfall Dettifoss; Europe's largest bird cliff Látrabjarg; and Europe's largest (or second-largest, but that doesn't have the same ring to it) glacier Vatnajökull―just to name a few of Iceland's most stunning pearls.

Whether these magnificent attractions are in fact the biggest or brightest according to international standards, their beauty and allure can hardly be denied. Icelanders have always lived in close contact with their natural surroundings, having developed a deep relationship over the centuries.

Be it the purest water in the world, cascading in beautiful waterfalls, the summers of the midnight sun, the winters and their Northern Lights, or the landscapes of continental fissure zones―the island has such a diverse array of natural wonders that anyone residing or visiting can't help but fall in love. 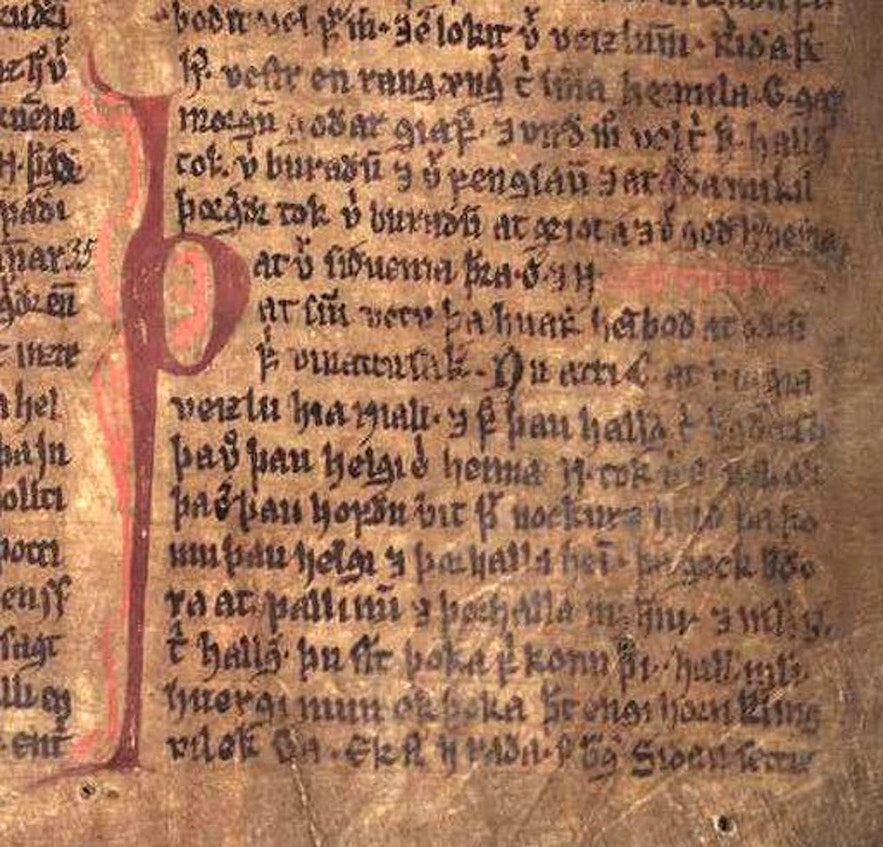 Photo from Wikimedia, Creative Commons, by Möðruvallabók. No edits made.

Icelanders are immensely proud of their language. Meticulously preserved for centuries, the ancient tongue can still be read by most locals in the sagas, scriptures and poems of the Settlement Age and beyond.

Writing in his mother tongue, novelist Halldór Laxness even secured the Nobel prize in literature in 1955. In modern Iceland, it is said that one in every ten Icelanders is a published author―this nation is utterly obsessed with books and literature. 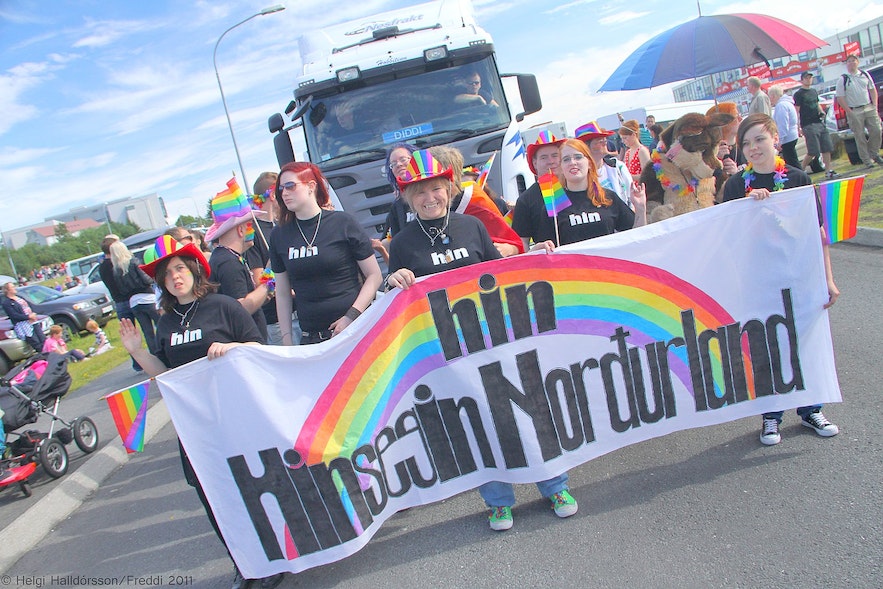 Icelanders take great pride in trying their best to progress human rights and values. The nation ranks amongst the most evolved in the world when it comes to gender equality, freedom of expression, gay rights,  and levels of democracy.

With a guarantee of religious freedom, no state violence, and laws strictly forbidding discrimination based on race, gender, disability or other factors, Iceland is by many standards and measurements considered a world leader when it comes to the human rights enjoyed by its people.

Of course, no place is perfect, and the country is far from being a Utopia, but with such an impressive record, Icelanders are very proud of how far they've come―and hope for the rest of the world to follow.

4. The Fishermen of Iceland

Icelanders are very proud of their Coast Guard, and of being the only country in recent history to defeat the British navy. The Cod Wars were a series of confrontations where the Icelandic nation had to fight over-fishing in their territorial waters. So yes, the most peaceful nation in the world fought a war once... and won.

Furthermore, fishing has always been crucial to the survival of the people. As the country's oldest trade, fishing is and always has been tremendously important, meaning the fishermen are well respected.

Every year, on the first Sunday of June, a national 'seamen celebration day' known as Sjómannadagurinn is held throughout the country, showing the nation's gratitude for these brave men and women.

Icelanders love their athletes, especially when they win. When Vala Flosadóttir secured a shiny bronze necklace at the 2000 Summer Olympics, she instantly became the epitome of the entire nation's health and excellence.

And when the Icelandic men's handball team won the silver medal at the 2008 Beijing Olympics, there was no going back. The team was instantly labelled as "our boys" by the local press and were greeted as heroes when they returned home.

Nowadays, the focus has shifted to the national men's football team. That such a minuscule nation managed to beat the football giant that is England, simply served to prove, once and for all, that Icelanders are the best in the world.

Better yet, only 2 years later Iceland entered the World Cup for the first time. Getting a tie with Argentina in their first match showed the world that Icelanders are not to be messed with, although the team didn't qualify into the next round. However, the Icelandic football team has shown that it's good enough to compete with the teams on top.

6. The Strong Men of Iceland 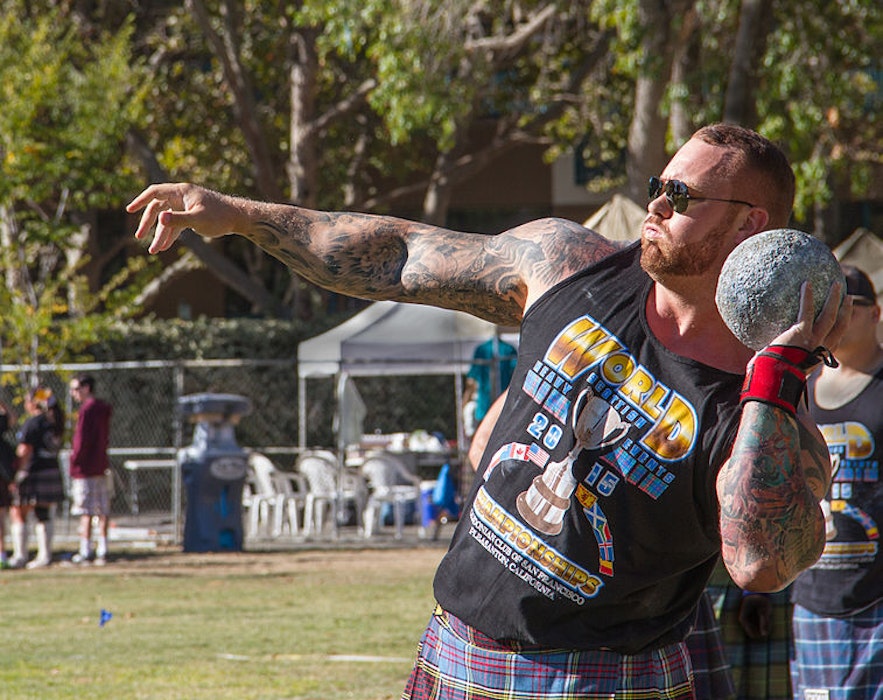 Photo from Wikimedia, Creative Commons, by Ellen Finch. No edits made.

Icelandic men like to think of themselves as a collective of strong and sturdy Vikings. If every man in Iceland feels a bit tough for just being an Icelander, it is mostly thanks to Jón Pall Sigmarsson―winner of the world's strongest man competition, Europe’s strongest man contest and numerous other awards.

Icelanders come from a long line of hardworking men and women who survived incredibly harsh conditions for centuries. While today, the people have it easier when it comes to their daily struggles, fitness is still held in high regard by the nation as a whole.

7. The Beautiful Women of Iceland

Iceland has also birthed four Miss World winners, which, if we are to trust in beauty competitions, naturally means Iceland must possess the most beautiful women in the world.

The winners of the Miss World Competition were Guðrún Bjarnadóttir in 1963, Hólmfríður Karlsdóttir in 1985, Linda Pétursdóttir in 1988 and Unnur Birna in 2005―all amazing, hardworking women and stunning natural beauties. They will forever be beloved in their home country as ravishing representatives of Iceland's excellence and charm.

Many visitors to Iceland really do proclaim that both the men and women of this country are, on average, ridiculously good-looking. The increase of instagram followers of footballer Rúrik Gíslason after his first appearance at the 2018 World Cup is a good testament to the good looks of the men as well.

Be it the cleanness of the air and water, the quality of living or merely the DNA pool, who's to say... but we like to think it's true!

8. The Music of Iceland 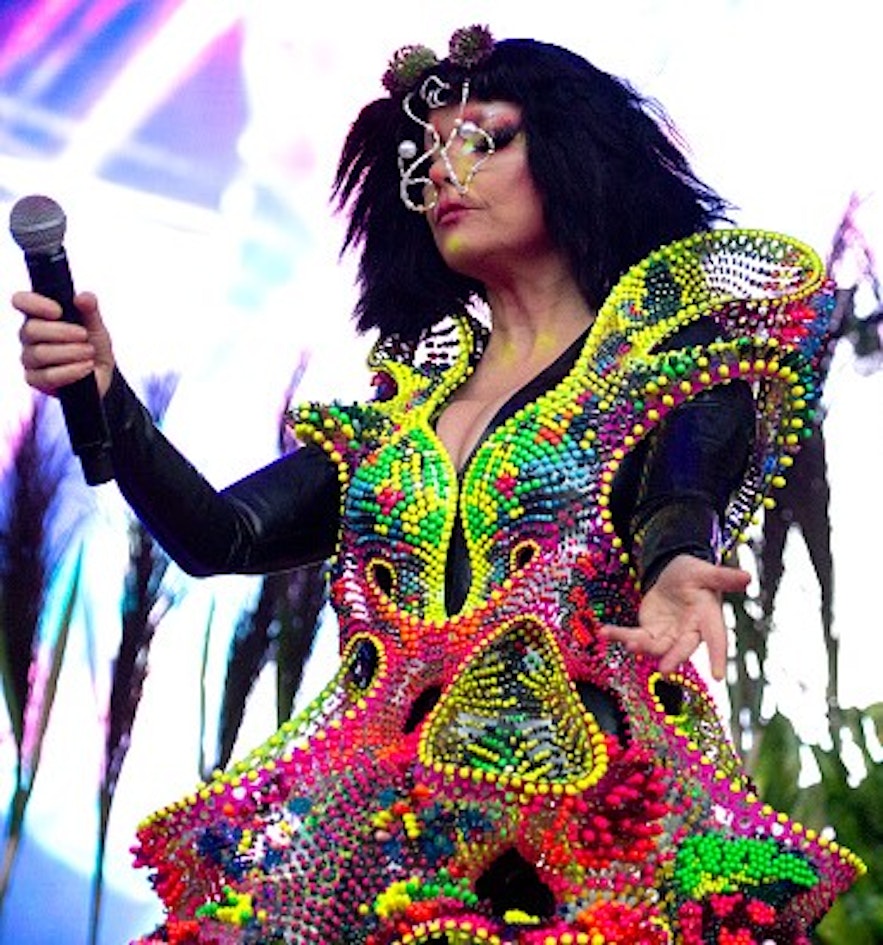 Photo from Wikimedia, Creative Commons, by Langanjart. No edits made.

Again, given how incredibly few people actually inhabit Iceland, it is nothing less than astonishing how many successful trail-blazing musicians the country has produced.

Be it the elvish melodies of Sigur Rós, the hypnotising beats of Gusgus, or the indie charms of Of Monsters and Men, Icelanders continue to amaze the world's population with their incredible talents when it comes to the creation of sound.

Of course, our ultimate national treasure is  Björk, known in her home country since her teens as punk queen of the Sugar Cubes, and internationally acclaimed as a creative force of energy since the 1990s.

Furthermore, visitors to Iceland seem to notice that every single person they meet is either a solo musician, a DJ or member of a band. Maybe it's the isolation, or perhaps the inspiration from nature―creativity isn't lacking in the land of ice and fire. 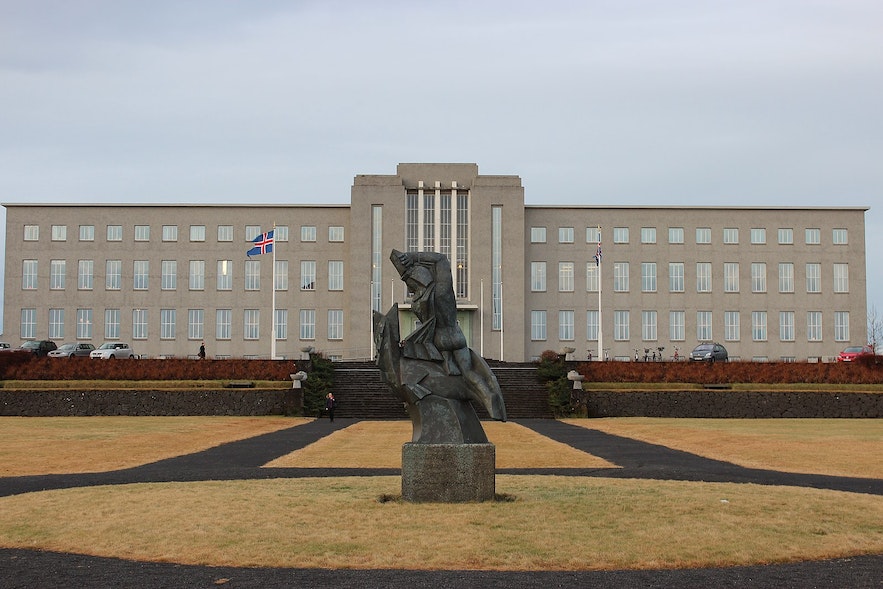 Photo from Wikimedia, Creative Commons, by James Mason-Hudson. No edits made.

The Icelandic educational system has been the cornerstone of Iceland’s survival and progress for the past decades. Although there is always room for improvement, Icelanders are proud of the fact that they have the highest literacy rate in the world―a feat that can't be dismissed.

The University of Iceland has an annual tuition fee of approximately 600 EUR, which is well below Europe's average of 4,500 EUR per year. With higher education available to all, Iceland yet again offers a shining example of things done right.

10. The Inspiration of Iceland 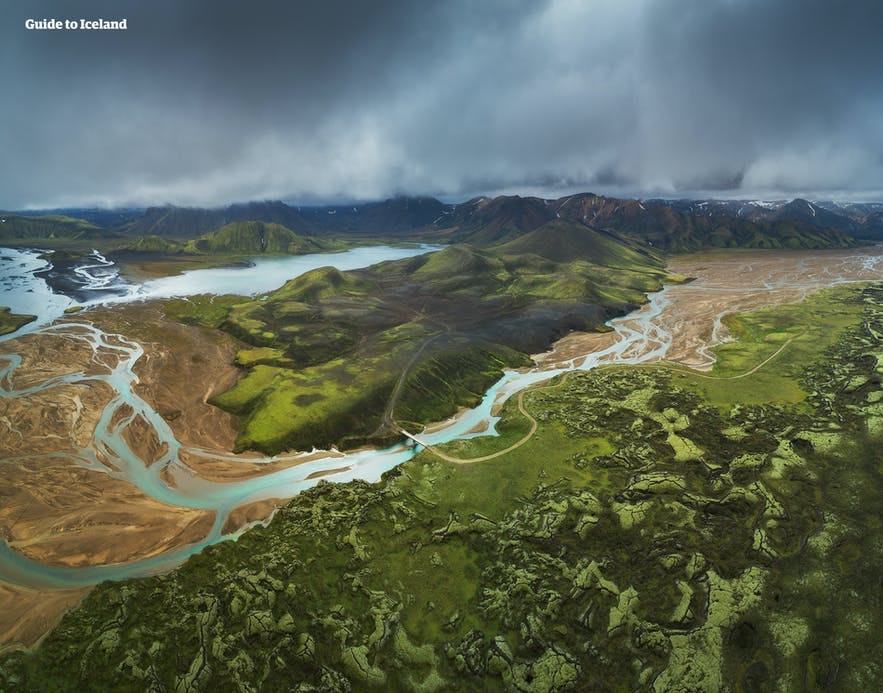 When it comes down to it, the Icelandic nation is creative and funky, serving as an inspiration to musicians, film-makers and artists from all over the world.

Whether it is due to all the magnificent shooting locations in the Icelandic nature, the array of internationally acclaimed music festivals, or the string of talented locals, thousands of creatives flock here on a yearly basis to get a piece of the action.

As a country that is both widely unspoilt, and yet boasting the world's highest comfort of living, there might be no better place to feel both isolated and embraced. The capital city of Reykjavík provides the modern culture, while the rural villages and uninhabited central Highlands offer an escape from it all.

Immerse yourself with the local music scene at Iceland Airwaves, Secret Solstice or Sónar Reykjavík and enjoy the artistic culture at the Reykjavík Fringe Festival or LungA Art Festival.

Icelanders, in general, embrace the fact that their country is so sought after as a destination, be it for art, education or travel. The only thing left for you to do is to join the party and judge for yourself.

We hope to see you in Iceland very soon! Leave your thoughts in the comments box.