The Ultimate Guide to Helicopter Tours in Iceland

Much has been written about sightseeing in Iceland. It is, after all, a landscape defined by its staggering natural attractions, characterised by its rugged coastlines, smoky mountains, cragged lava fields and creeping glaciers. Around every corner, every twist in the road, it is as though Iceland materialises countryside in a bid to forever outdo itself.

But is there a way to take sightseeing in Iceland to the next level? How does one beat the crowds, cut down on their travel time and bag a lifetime of memories in the process? Well, there’s only one option.

Sightseeing by Helicopter. For lack of a better word... Flightseeing.

Oh yes, for those looking for a truly V.I.P. experience in Iceland, taking a helicopter ride across this wild and mesmerising landscape is a serious must.

Not only do helicopters provide a fantastic aerial perspective over some of Iceland’s most beloved natural attractions, they also shoot an enormous jolt of adrenaline into the system, adding a level of action to the day that can hardly be substituted for a seat on the MiniBus. 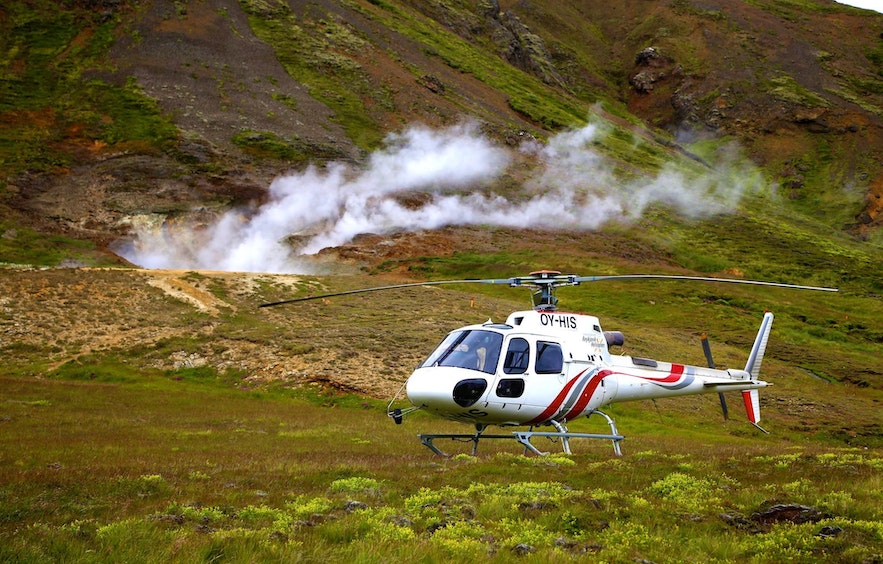 Photo from Epic 4.5 Hour Helicopter Tour over Landmannalaugar & Eyjafjallajokull with Transfer from Reykjavik

Thankfully, there are a good number of options for helicopter flights in Iceland, ranging from the one-hour turnaround to a full day’s adventure soaring among the clouds. Many of these flights choose to specialise in certain routes, such as the Golden Circle, while others promise a wider appeal, soaring across an open landscape with the possibility of making a landing on a mountain summit.

We will explore these options together to ensure you find the helicopter tour that best suits you. Whatever it is, you’re sure to be in for the ride of your life.

Why Sightsee By Helicopter?

There are a number of benefits to sightseeing by helicopter rather than by minibus, coach or Self Drive. The first is, naturally, the most obvious; the views by helicopter are immeasurably stunning. 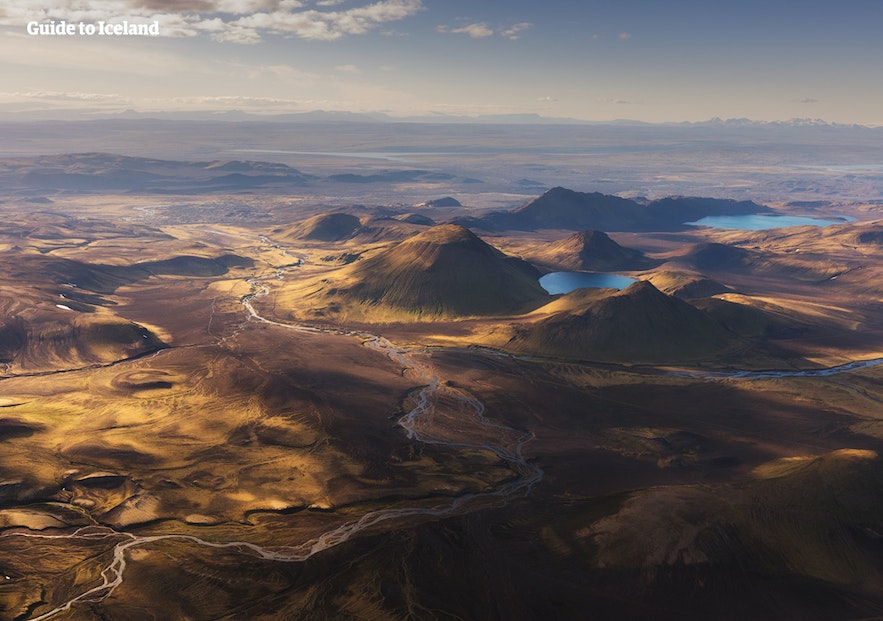 Unlike flightseeing in a light aircraft, helicopters keep relatively low to the ground, meaning you’ll still feel like you’re getting an intimate appreciation of the attraction in question. Given your height, you will also be able to look down upon sights not visible from the road, such as a smouldering volcanic caldera or an untouched canyon, deep in the highlands.

They can also land almost anywhere, be it in front of a waterfall, on a glacier or even a cragged mountain ridge. In this regards, sightseeing by helicopter is certainly the most flexible and accessible means of accessing the Icelandic countryside. Not only that, but this wealth of choice when it comes to possible landings means that you’ll likely come to experience incredible panoramic views inaccessible to almost everyone else.

Given that Iceland’s helicopter tours leave from beside Reykjavík Domestic Airport, take-off will immediately mean you are privy to the city from above. As you rise into the air, the colourful tin-roofs of the earth’s northernmost capital city quickly transforms into a kaleidoscopic, patchwork quilt.

Noting the sheer openness of Reykjavik’s surroundings, you will instantly gain an awareness of just how small this “city” is—it’s impossible to think otherwise as the endless wildlands of Iceland stretch out over the horizon.

Another benefit of sightseeing by helicopter is, undoubtedly, the small group sizes. Helicopter tours in Iceland can take up to a maximum of eight guests, with the usual minimum at 4. This means that during your trip, you will be sharing the magic with only a few other people and your pilot, ensuring an intimate and personalised experience.

What Helicopters Are Used? 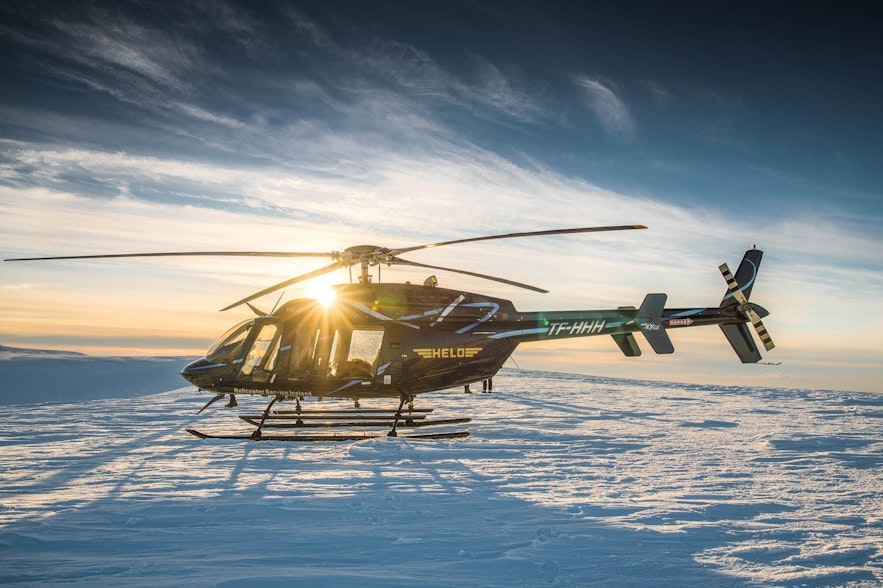 Photo from Helicopter Tour | The Golden Circle & Touchdown on Langjokull.

Unless you happen to be a pilot yourself, or just some strangely-obsessed whirlybird fanatic, chances are you won’t consider what helicopter you’ll be flying in. A helicopter is a helicopter, right? Wrong.

The particular type of helicopter used for sightseeing in Iceland differs greatly between the operators, but all are equally safe, managed by experienced hands, and suitable for the task at hand.

You could be riding in an AS365N Dauphin, for instance, a double-engined chopper capable of carrying up to eight passengers and reaching speeds of up to 275 km/155 knots an hour. 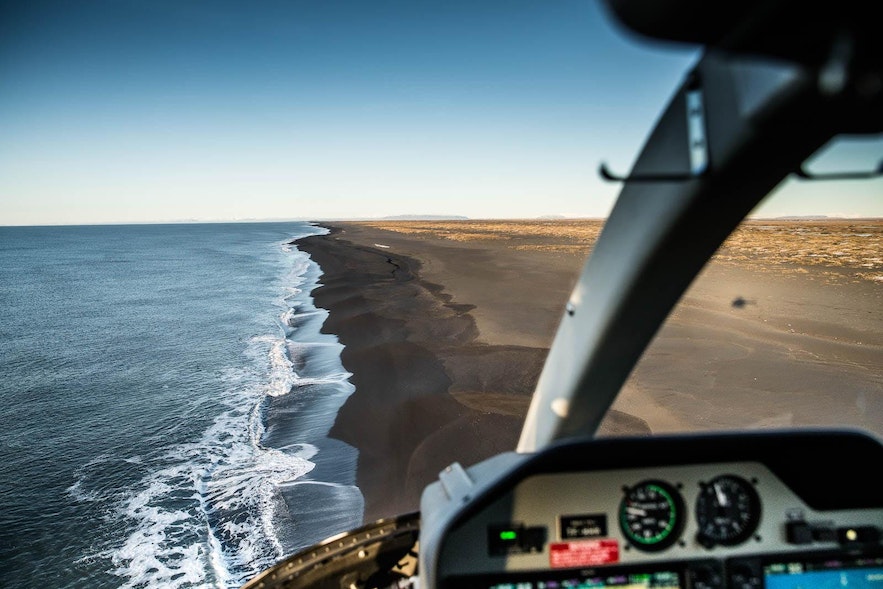 Alternatively, you might find yourself seated in an AS350 B2 Ecureuil–Astar, a smaller helicopter that holds 5 people and is largely used for aerial photography work.

You might even be riding in the smaller Bell 206 Jetranger, otherwise known as “The Bell”. This helicopter seats up to four people, but on longer flights, will only take three (this to provide a greater level of comfort during the trip). The Bell also comes with an interchangeable door, a modification provided especially so that photographers can get the best possible snapshots.

If you’re the type of photographer looking for that epic perspective, The Bell can be the chosen helicopter of the day (at an extra fee), as long as the tour operator is notified beforehand.

Where Can You Sightsee by Helicopter? 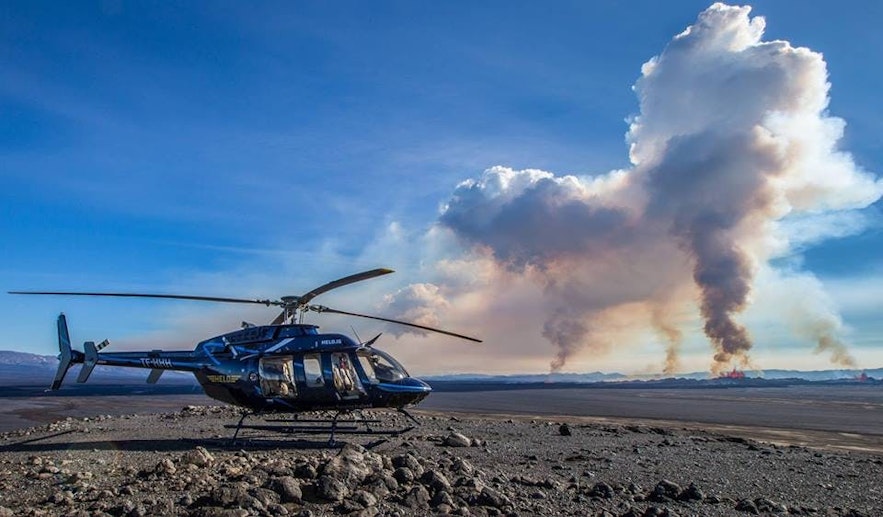 A quick look online will reveal the sheer wealth of options when it comes down to choosing where to sightsee in Iceland by helicopter. Many operators split their flights into different categories; Glacier flights, Reykjavik flights, tours to volcanoes and mountains and geothermal valleys and highland canyons. It seems the list is never-ending, and for that, there is only the landscape to thank.

One of the most popular options is the Reykjavik summit tour, a flight that takes you from the civilised flatground of the city all the way up to a mountain summit. Depending on conditions, and the desires of your pilot, these flights tend to land either on Mt. Esja—the tabletop mountain that overlooks Reykjavik and Faxi Bay—or within the Blue Mountains, in the Reykjanes Peninsula.

Of course, helicopters do go further afield, but if you have particular attractions which you are desperate to see from the air, it is your responsibility to make sure that your chosen tour includes said attraction. Given the sheer size of Iceland and the long distances between many of attractions, helicopter pilots can only fly a certain distance and back before needing to refuel.

If you are interested in discovering the frozen plateaus of one of Iceland’s beloved glaciers, then a helicopter tour will save you the hassle of not just driving to it, but actually hiking it. Nothing feels quite as satisfying as landing at the glacier summit without exerting any physical effort—the only thing that could make it better is smiling smugly at a group of exhausted glacier hikers as they wheeze their way to the peak. 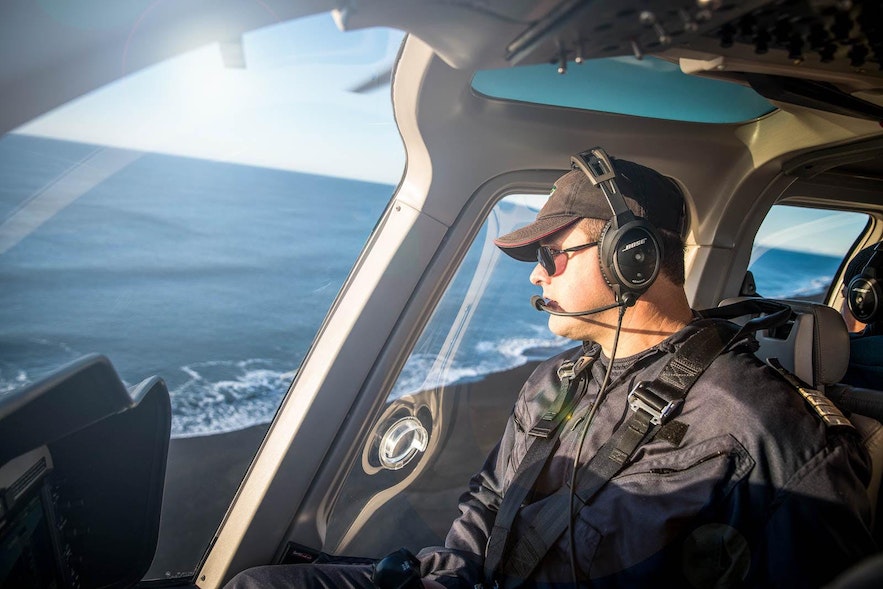 Particularly popular are helicopter trips to geothermal valleys, craters and volcanic calderas across Iceland. This is a fantastic means of reaching these authentically Icelandic areas and presents the unique chance to observe the rising pillars of steam that so characterise these areas from the air.

And, once again, there comes with it the luxurious sensation of landing among a bunch of people not wise enough to travel by helicopter themselves. Aren't you special?

What Do I Need To Bring On A Helicopter Tour? 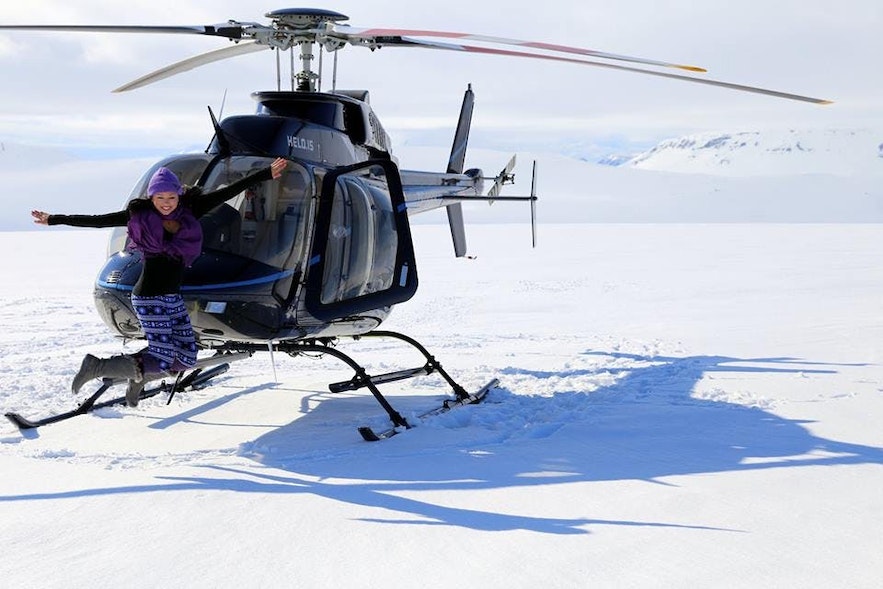 The good news is, helicopter tours require very little but a level of courage from their guests. Don't underestimate the level of courage needed, however, given the feelings and sensations that come over one after lifting off (...let's face it, being a helicopter passenger is not a natural fit for most of us).

However, it is a good idea to keep in mind some common sense considerations before arriving at the airport for your tour. Most importantly is proof of purchase and ID (so the tour operator knows who you are), warm clothing and your camera. You will need warm clothing and good shoes based on where you will be landing and what you will be doing—don't get caught on a mountaintop in just your shorts and a t-shirt!

But most important is your camera. The panoramic sights and aerial perspectives are entirely out of this world and seemingly demand to be captured on film. One of the real pleasures of helicopter sightseeing is knowing that you won't see visual stimulation like this for a long time, so make the most of it!

Besides, this is a trip that you're going to want to look back on for the rest of your life.

Did you enjoy our article 'Helicopter Flights in Iceland'? Did you manage to take a helicopter sightseeing tour during your time in Iceland, and if so, where did you go? Is there a particular helicopter tour you'd recommend? Feel free to leave your thoughts and queries in the Facebook comments box below.