Lighthouses in Iceland | Everything You Need To Know

How much do you know about Iceland’s lighthouses? How many are there, what is their history and how can you find them during your trip to the land of ice and fire? Read on to find out all you need to know about lighthouses in Iceland. 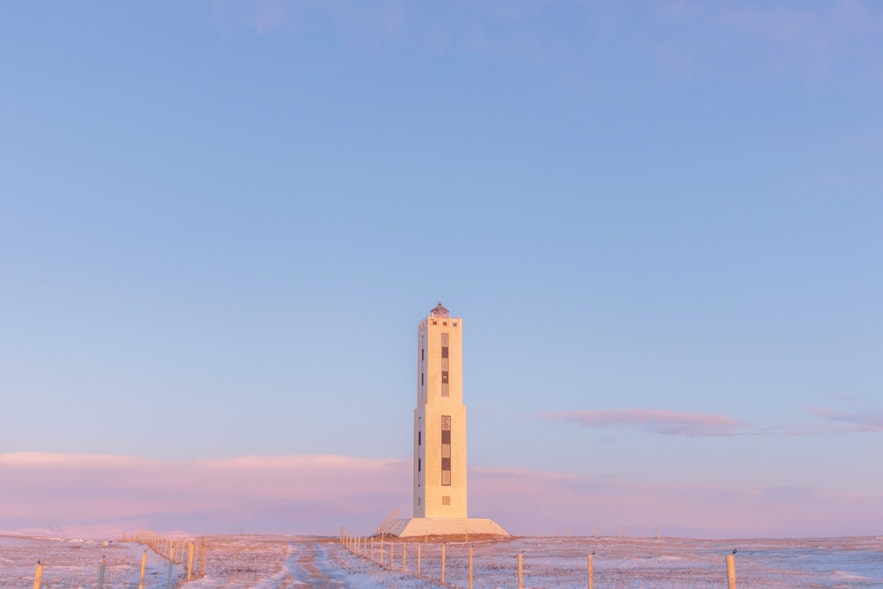 Imagine yourself on the high-seas, three weeks into a fishing expedition that has seen you fight the North Atlantic’s tempestuous waves, its gale-force winds, and the winter’s enduring darkness.

Now on your voyage back home, your eyes seek out the ebbing glow of a coastal lighthouse, a surefire sign that you are safe and on the right course.

To the sailors of old, lighthouses served as a beacon of hope, a signal that navigated their passage safely to shore, to family and to home. Today, in a time of electrical navigation, these historic buildings serve as a monument to mankind’s proclivity for adventure, not to mention its age-old bond with the sea. 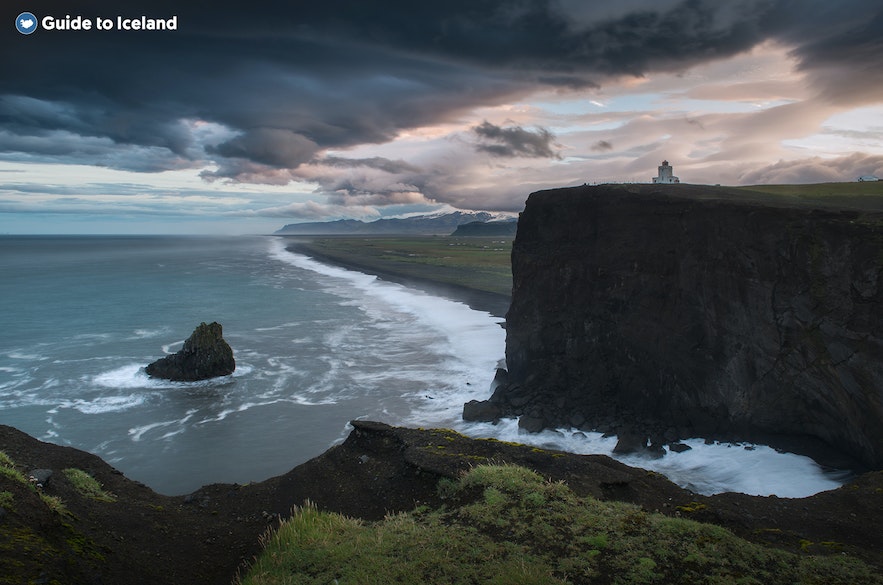 Before the construction of ports and mariners, those left on land would guide their fellows’ ships to safety by enormous hilltop fires. Afterwards, coastal churches would serve as make-shift beacons.

Given that Iceland was settled by ocean-faring peoples and has, over the centuries, relied on fishing for its livelihood, no one knows the importance of the sea better than Icelanders.

There are approximately 104 lighthouses manning Iceland’s 5000-kilometre coastline. Though they may be small—a reflection of this island’s historic impoverishment—they are more than worthy of a visit, particularly for those with a passion for architecture, history or fantastical panoramas.

The Icelandic word for a lighthouse is viti, which means “to know”, as in to know where one is sailing. So, without further ado,  it’s time to know which are the best lighthouses to visit during your time in Iceland? 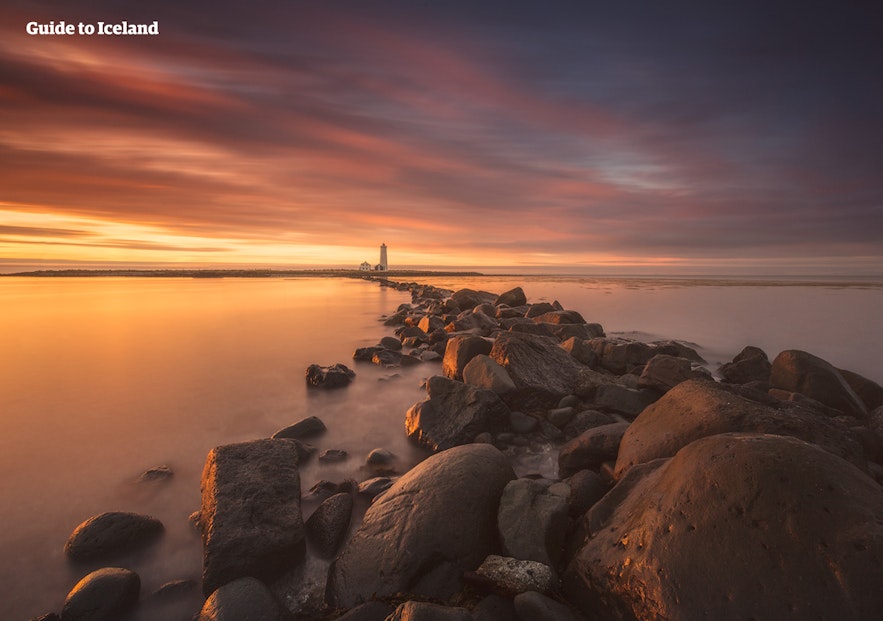 A lighthouse has existed at Grótta since as early as 1897; before that, a historic farmstead can be dated to the area as early as the 16th century.

The lighthouse we see today was constructed in 1947 and, save from joining the electrical grid in 1956, has changed little since then.

The recreational surrounding the lighthouse is interspersed with hiking trails and bike and walking paths and is a popular Northern Lights spot for urbanites during the winter. Unsurprisingly, the area has been a nature reserve since 1974 thanks to its wild and abundant birdlife.

During June, parts of the reserve are cordoned off to protect said wildlife, though their protection might be somewhat unnecessary given the birds will dive-bomb anyone who comes too close to their nests and eggs.

Aside from a nasty peck on the head, visitors will be fined if seen to be disrespecting the cordoned off areas. 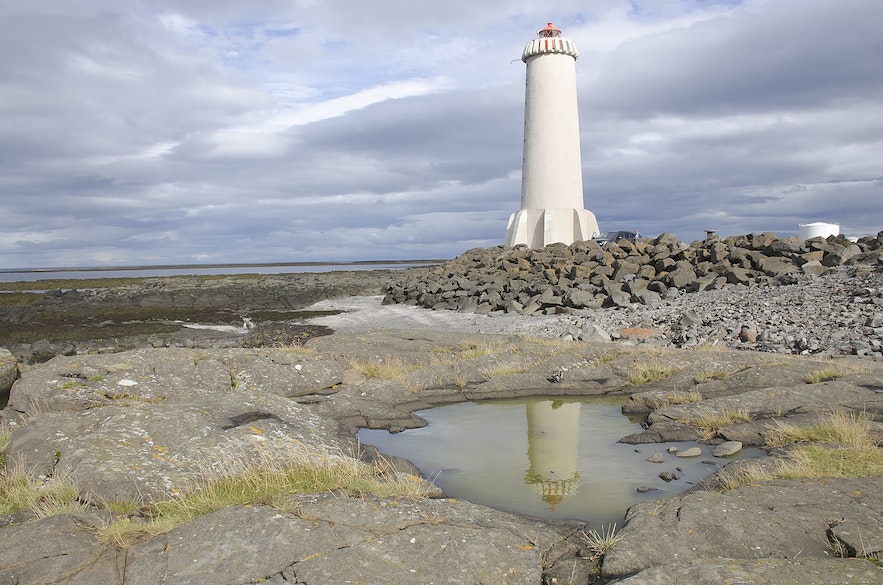 Akranesviti can be found in Akranes, a small town approximately 50 kilometres from Reykjavík. Akranes itself, known largely for its industry, is home to approximately 7000 people, thus making for an interesting stop during your time travelling in the area.

There are, in fact, two lighthouses down at the harbour; one which is older, smaller and no longer in use, and another that serves as a museum and photography exhibition dedicated to Icelandic lighthouses in general.

The smaller of the pair is one of the oldest concrete lighthouses in Iceland, having been built in 1918. It was deactivated in 1947 after the townsfolk decided to utilise the larger structure only a few metres away.

Dyrhólaeyjarviti near Vík in south Iceland 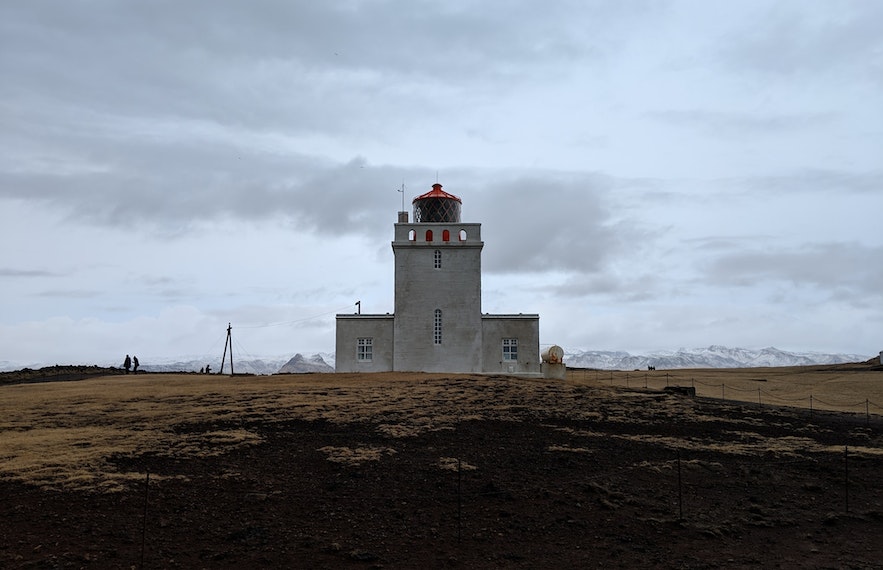 Dyrhólaey lighthouse can be found on the central South Coast, making it a perfect point of interest on sightseeing trips in the area.

The entire area of Dyrhólaey is known for providing incredible views over the South Coast, including its rugged black sand beaches, its distant mountainscapes and ancient sea cliffs.

The tower, standing at 13 metres high, is not open to visitors but does mark the southernmost point of the Icelandic mainland. The promenade is an excellent spot for seeing puffins during the summer months.

The first ‘light station’ was built on the promenade in 1910, though the construction we see today was completed in 1927.

Aside from the lighthouse, the promenade’s most recognisable feature is an enormous coastal rock arch, a consequence of centuries of erosion. Boat tours will often divert through the rock arch and, in 1993, a daredevil pilot even flew through it, a true testimony to its gargantuan size.

Garðskagaviti on the Reykjanes peninsula 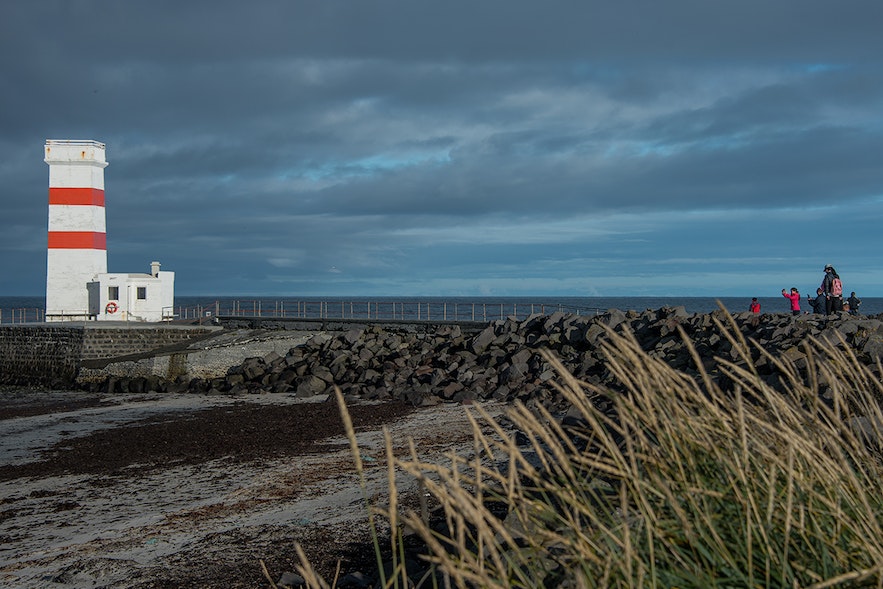 Photo from Wikimedia. Creative Commons. by Emstur. No edits made.

Garðskagaviti can be found on the topmost point of the Reykjanes Peninsula, directly above Keflavík International Airport (KEF). Originally, a lighthouse at the site was constructed with timber in 1897 by the Danish Lighthouse Commission. In 1933, the lighthouse was renovated, reinforced with concrete, before being decommissioned in 1944 due to fear of landslides.

Garðskagaviti, standing at 26 metres high, was built as a replacement. It is today considered one of Iceland’s most picturesque lighthouses with its vibrant red and white paint job and gorgeous surrounding scenery.

The lighthouse keeper kept a permanent residence here until 1979.

Þrídrangaviti near the Westman Islands 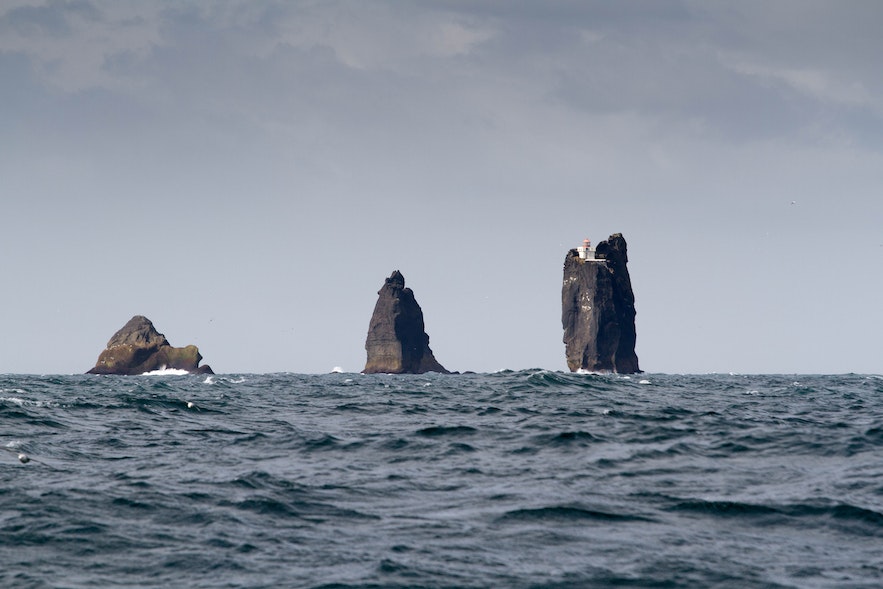 Photo from Wikimedia. Creative Commons, by Voilier.Evidence. No edits made.

Without a doubt, Þrídrangaviti is one of the most dramatic, unique and visually stunning lighthouses in Icelandic territory. The lighthouse is built atop an enormous, 120-foot basalt stack in the Westman Islands, approximately 4.5 miles from the mainland.

Work began on the lighthouse in 1938. Naturally, this was a task easier said than done. Mountaineers and hikers—almost exclusively from the Westman Islands—scaled the cliffsides to create a makeshift trail, all the while combating slippery rocks, breathtaking heights and furious winds.

The lighthouse is available to visit today by helicopter, though the journey is just as terrifying given the deft-defying drops and fearsome forces of nature.

Dalatangaviti in the East Fjords 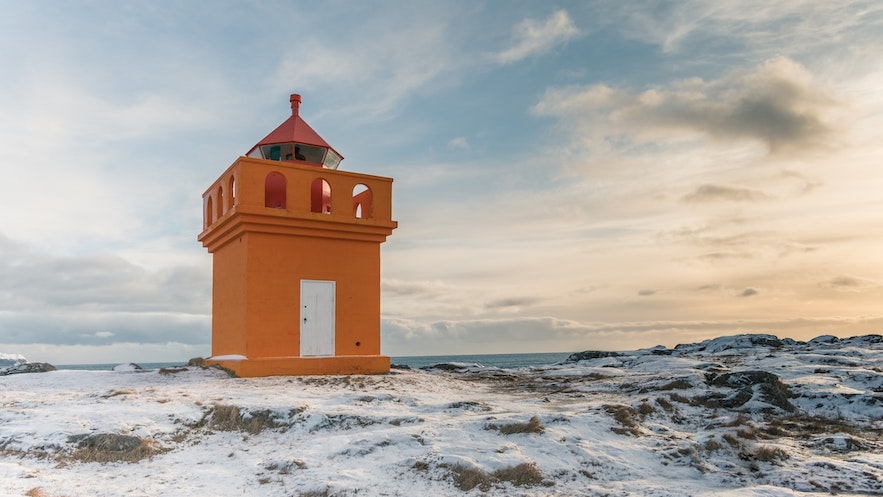 Dalatangaviti is one of the country’s most iconic lighthouses thanks to its bright orange paint job. Located off a dirt road from the small eastern village, Mjóifjörður, visitors will witness a number of waterfalls en route, making this an excellent spot for those sightseeing in the area.

The lighthouse—originally built in 1895 by the shipowner, Otto Wathne—was decommissioned in 1917 and fell into major disrepair. It was the only lighthouse in Iceland built by a private entrepreneur.

The electrical equipment of the new orange lighthouse was constructed 1959, around 100 metres from the original site. It is managed by the National Museum of Iceland.

From June to October, the Norröna ferry passes Dalatangaviti on its journey from Denmark to Seydisfjörður. Seydisfjörður. The MS Norröna is the only car ferry that commutes between Iceland and another country, making stops at Bergen, Norway and Scrabster, Scotland. 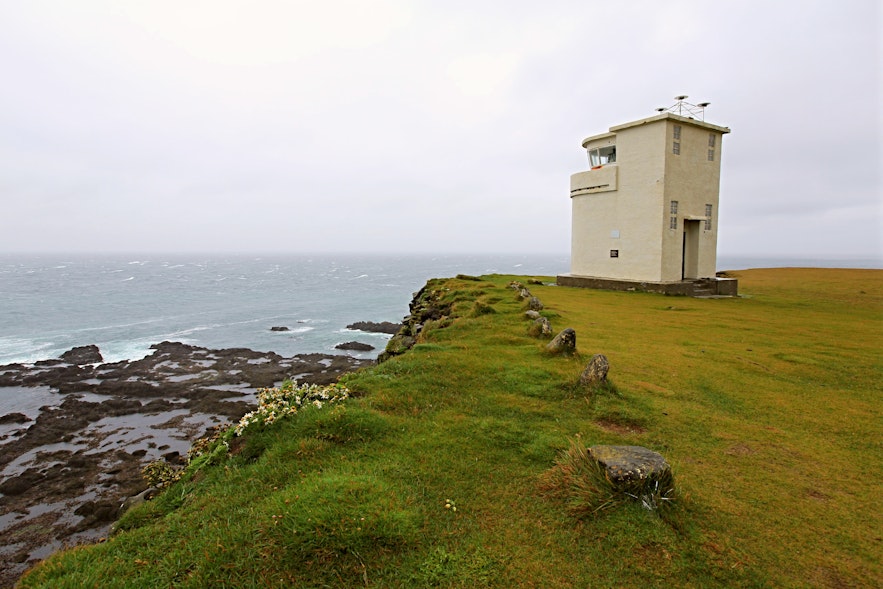 Photo from Wikimedia, Creative Commons, by Martin Cigler. No edits made.

Established in 1913, the current tower was built in 1948. Aesthetically, the lighthouse is two stories high, painted completely white and constructed of concrete. Thanks to its high vantage point, the light’s focal plane is 60 metres above the sea.

The tower is unfortunately closed to visitors, though one can venture to the site while bird watching at Látrabjarg bird cliffs. Both photographers and nature enthusiasts will find this site unmissable.

Látrabjarg, in the Westfjords, is one of Europe’s biggest bird cliffs, home to millions of birds. The site extends for 14 kilometres and reaches heights of 441 metres. Puffins and other species are particularly fearless here, given their shelter from Arctic Foxes.

The lighthouse marks the westernmost point of both Iceland and Europe. 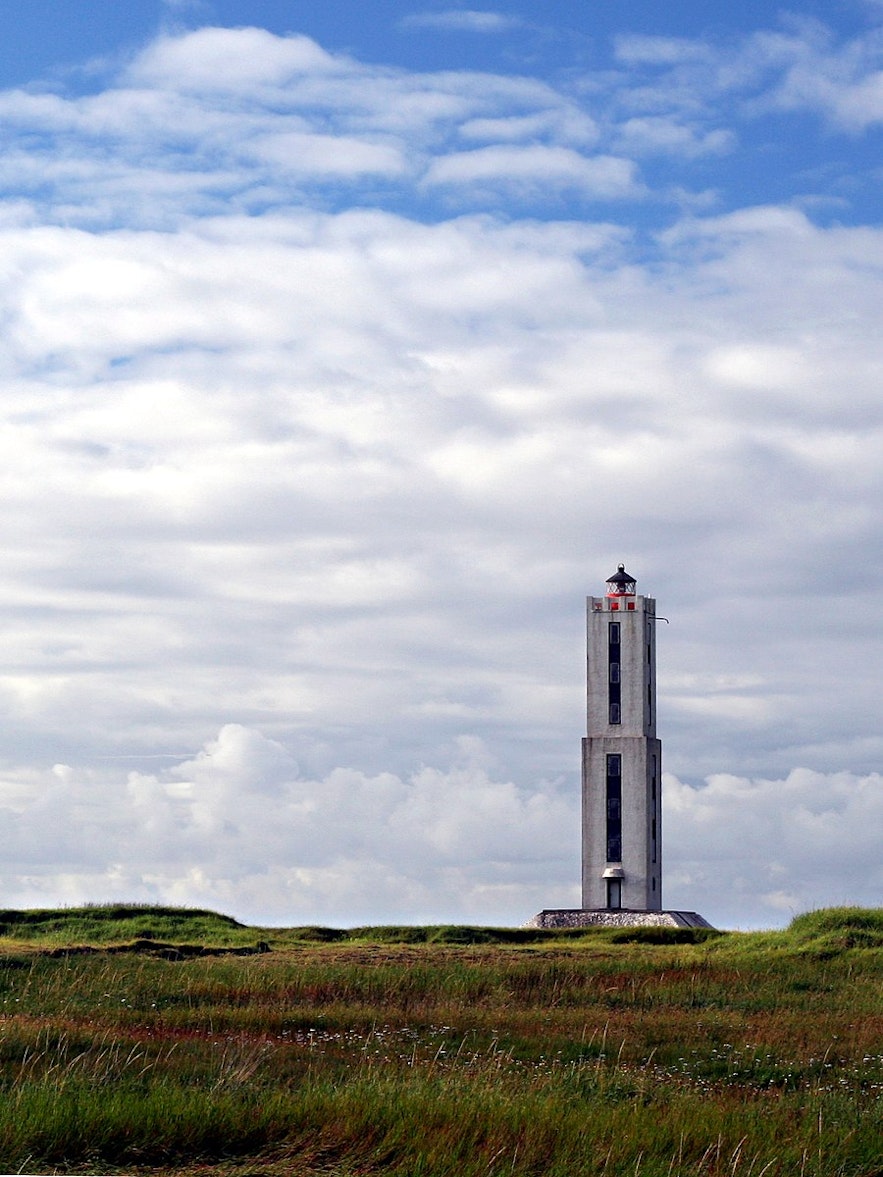 Photo from Wikimedia, Creative Commons, by Ira Goldstein. No edits made.

Built in two cuboid stages in 1939, the lighthouse was designed by civil engineer Axel Sveinsson, who was himself heavily inspired by the work of Icelandic state architect, Guðjón Samúelsson (1887–1950). The architectural aesthetic is a blend of art nouveau and functionalist styles.

Located approximately 5 kilometres from the small town of Stokkseyri, the lighthouse has been left unpainted, though adorned with black panelling. Overall, the lighthouse stands at 26 metres high.

The tower is not open to visitors, though guests are welcome to enjoy the rest of the site.

Reykjanesviti on the Reykjanes peninsula

Reykjanesviti holds the title of Iceland’s oldest lighthouse and, thus, one of its most famous. Serving as a landfall light for both Keflavik and Reykjavik, the lighthouse is found along the Reykjanes Peninsula.

The original lighthouse along the southwestern edge of the Reykjanes Peninsula was first constructed in 1878, but unfortunately, was destroyed by an earthquake eight years later. In 1929, today’s 31-metre concrete structure was built with a traditional aesthetic.

In the modern era, a 2-story lighthouse keeper’s residence was constructed. The lighthouse still has a keeper to this day, making it something of a rarity amongst the pantheon of Iceland’s coastal beacons. 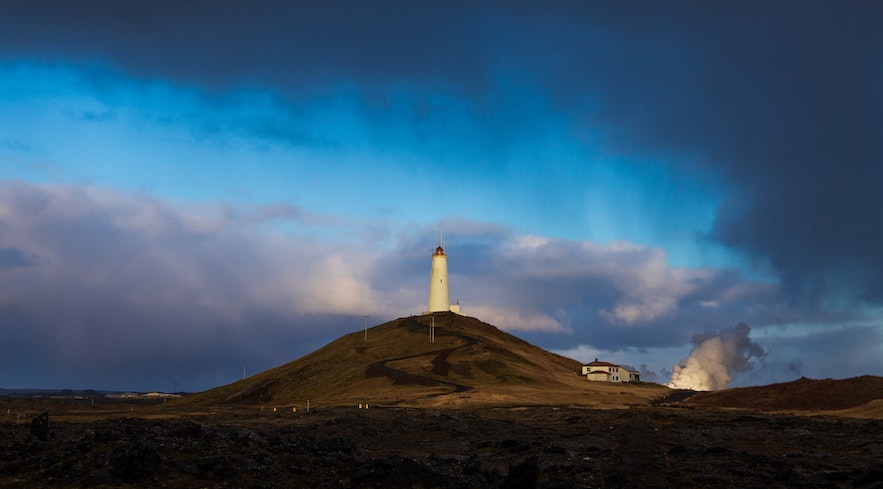 Did you enjoy our article about lighthouses in Iceland? Which Icelandic lighthouses have you visited? Which lighthouse was your favourite? Make sure to leave your thoughts and queries in the Facebook comments box below.