You might think of Iceland as a singular island, but the country actually consists of many smaller islands that dot its shores. Read on for our selection of the top five islands in Iceland.

As you probably know, Iceland is a large island in the middle of the North Atlantic Ocean, filled to the brim with natural wonders and sweeping sceneries, such as mighty glaciers, bubbling hot springs and active volcanoes.

This map has the five islands marked in green and the ports from which to reach them in yellow.

What you might not know, however, is that Iceland is surrounded by multiple smaller islands, all of which are well worth a visit for their amazing wildlife, beautifully tranquil sceneries and fascinating histories.

Here is our selection of the top five islands in Iceland. 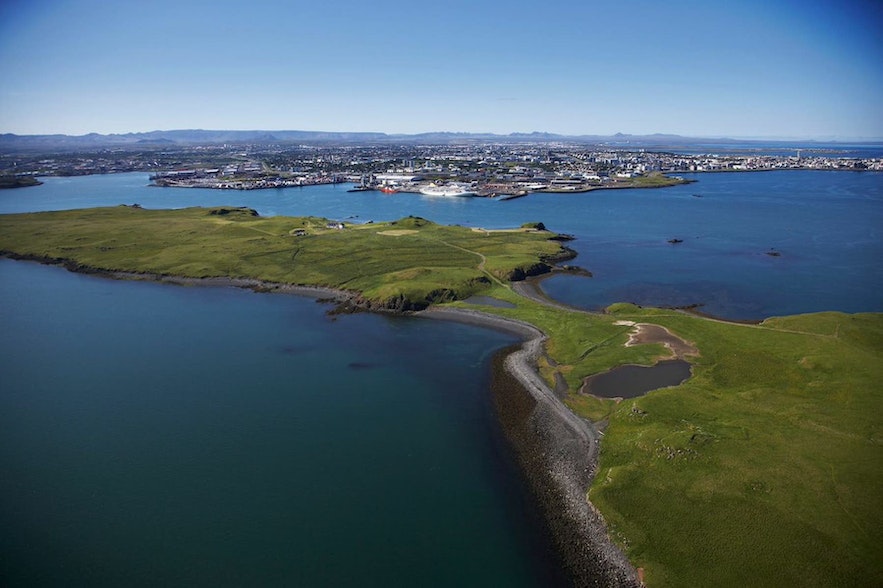 The island of Viðey is conveniently located within the Capital Region, and easy to reach via ferry from the Reykjavík Harbour. At 1.6 km2, it's also small enough to walk around within the scope of a couple hours. That doesn't mean there isn't plenty to see—since the island is dotted with scenic trails and beautiful bird sanctuaries.

The beaches of Viðey are calm and serene, as well as being an excellent location to spot seals popping their heads out of the water. Besides from its stunning wildlife, Viðey is also a historically important location, boasting many interesting archaeological findings from the 10th century.

The island has one historical building, an old stone house known as Viðeyjarstofa, formerly the workstation of Iceland's historical sheriff Skúli Magnússon but since converted into a café that is frequently rented for weddings and parties.

Yoko Ono had her Imagine Peace Tower built on this island, a shining and symbolic beacon of light dedicated to both world peace and her late husband John Lennon. The tower gets switched on every winter from October 9th to December 8th—the dates of Lennon's birth and untimely death.

Ferries to Viðey run on Saturdays and Sundays during the winter, and in mid-May, the summer schedule offers daily trips. Holders of the Reykjavík City Card are granted unlimited trips with the ferry, and seeing as the island is located a little over 700 metres from Reykjavík's harbour, you could go on several trips if you'd want to! 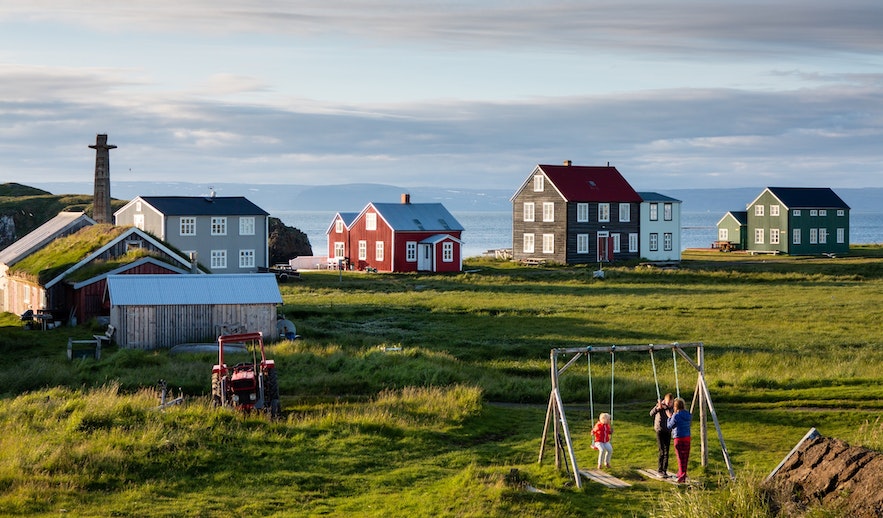 Between the wondrous Snæfellsnes Peninsula and the West Fjords is Flatey, a tiny island that rests in the fjord of Breiðafjörður. In the long winter months, it's near deserted, with only a few resident farmers and their sheep.

But in the summer, it's a bustling little tourist town where all the locals inhabit their summerhouses and run a few restaurants, shops and accommodation services out of their more-than-century-old homes.

You can get there with the Baldur Ferry from the quaint little town of Stykkishólmur, or from the old farmstead Brjánslækur in the North. Sailing through the archipelago in Breiðarfjörður is definitely its own highlight.

The best thing to do there? Go bird watching around the Flatey Nature Reserve and admire some colourful beaked puffins, or, if you're feeling frisky, go sea swimming in Stykkishólmur when you're waiting for the ferry. 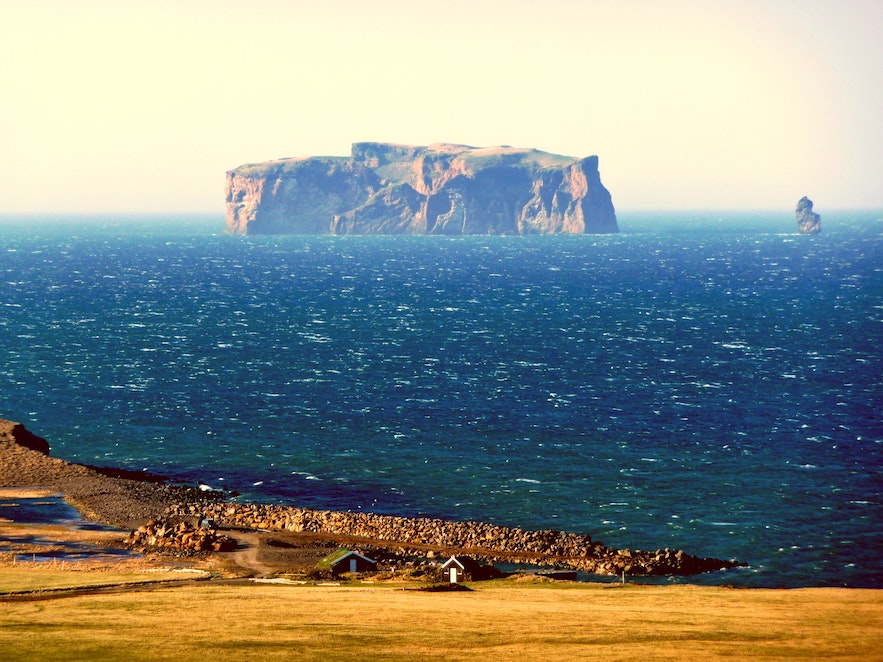 Photo by 'JD554', from Wiki Creative Commons. No edits made.

Drangey is a majestic island-rock in the middle of Skagafjörður in North Iceland, made famous by the Saga of Grettir. The hero of the saga was known to defeat his enemies with enormous strength and cunning wits, but in medieval Iceland, he was labelled an outlaw due to his rebellious and deadly behaviour.

The story goes that Grettir lived on Drangey with his brother, his slave, and some sheep. This enabled him in surviving attacks from his revenge-seeking enemies since there was only one way to reach the island. It's a steep and slippery slope, so if you're not sure-footed or if you are afraid of heights, I wouldn't recommend making the trek. 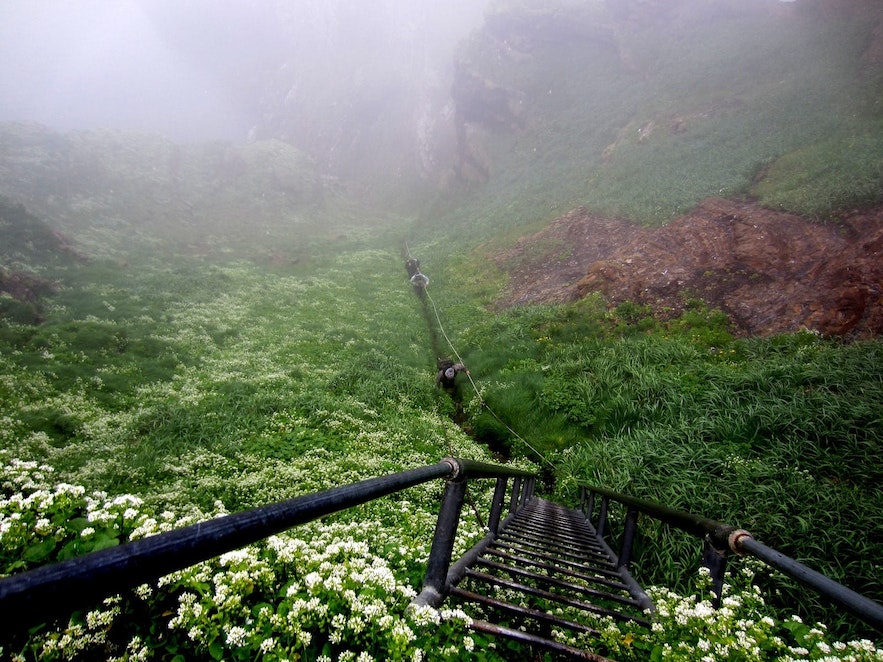 Today, Drangey is a common tourist destination, and the crumbling path up to its cliffs has ropes, chains and ladders to make it accessible to most. The primary reason for visiting is to catch a sure glimpse of the adorable North Atlantic Puffin, but they nest on the island during the summer season. There is also a small hut build on the island where hunters sometimes camp.

To get there, drive north from Sauðárkrókur to Grettislaug, where they've built a campground and two natural hot water pools. There, a man named Siggi and his son take a small fishing boat to the island daily during high season. Check out Drangeyjarferðir for more info. 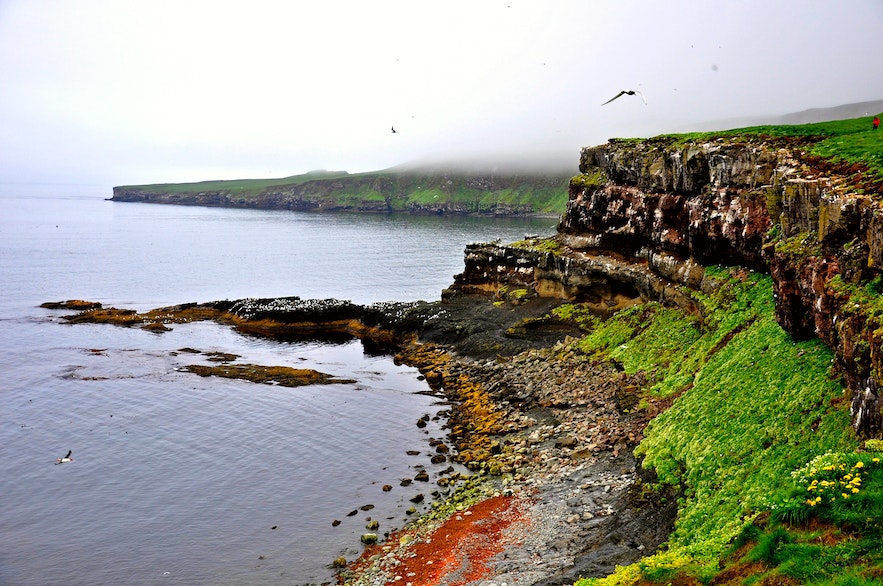 Some visitors to Iceland think that the country is in the Arctic, while in reality, it rests right by the edges of the Arctic Circle. However, there is one part of Iceland that is actually located in the northernmost circle of latitude on this planet, and that part is the island of Grímsey.

The jagged cliffs forming the dramatic coastline of the island are home to many nesting birds. These include the ever-popular puffins, but also auks, razorbills, fulmars and others. Bird populations have flourished in Grímsey, both due to the lack of predators, and the locals diminishing the practising of egg-hunting. 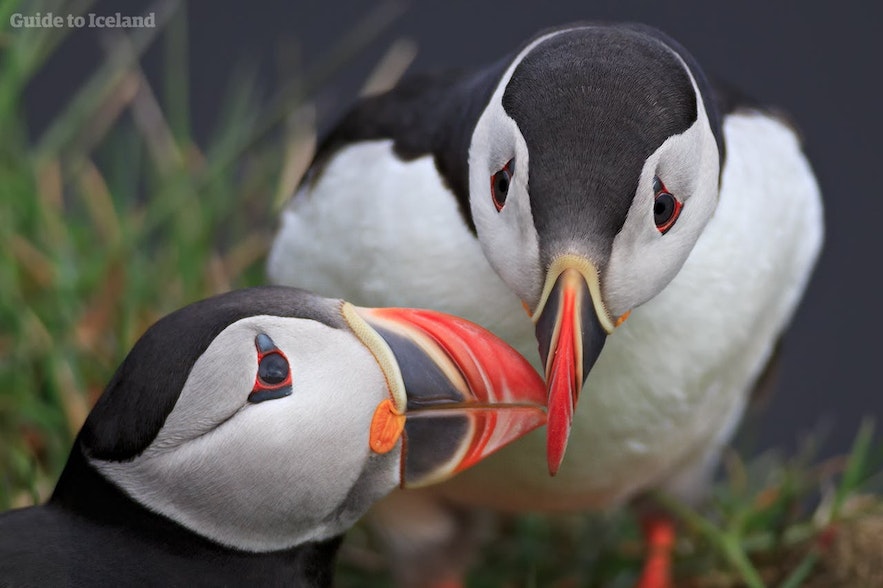 You can find a small wooden church located on the island, belonging to the parish of Akureyri. The church was built in 1867 with local driftwood that had washed ashore. Grímsey, in fact, boasts approximately a hundred residents, and because of the advent of tourism, the island now houses modern guesthouses and cafés, making it any travelling bird watcher's dream come true.

To get to Grímsey, you can take the Sæfari Ferry from Dalvík (which connects with a bus to Akureyri), or fly from Reykjavík or Akureyri via domestic airlines. 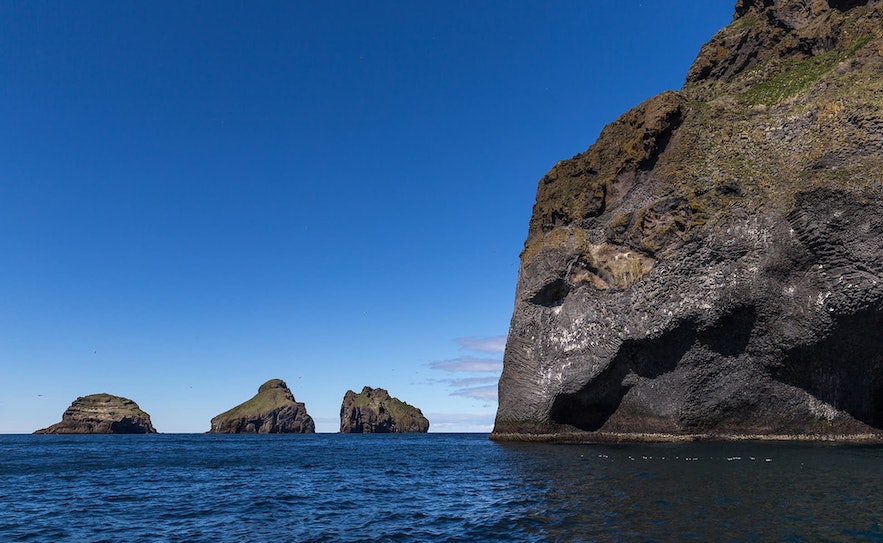 My father is from Vestmannaeyjar, and so are all true Viking Icelanders. Well, I might be biased, but the residents of these isles are considered some of the hardiest fishermen in the country and live on the oldest inhabited part of Iceland

Vestmannaeyjar is an archipelago of over ten islands, but Heimaey is the only one currently inhabited, boasting a population of 4000 people. These are people that historically survived gruesome 17th-century pirate raids and abductions from North Africa, as well as a devastating volcanic eruption in 1973 that lasted more than five months, buried many homes under lava and extended the island by a few kilometres. 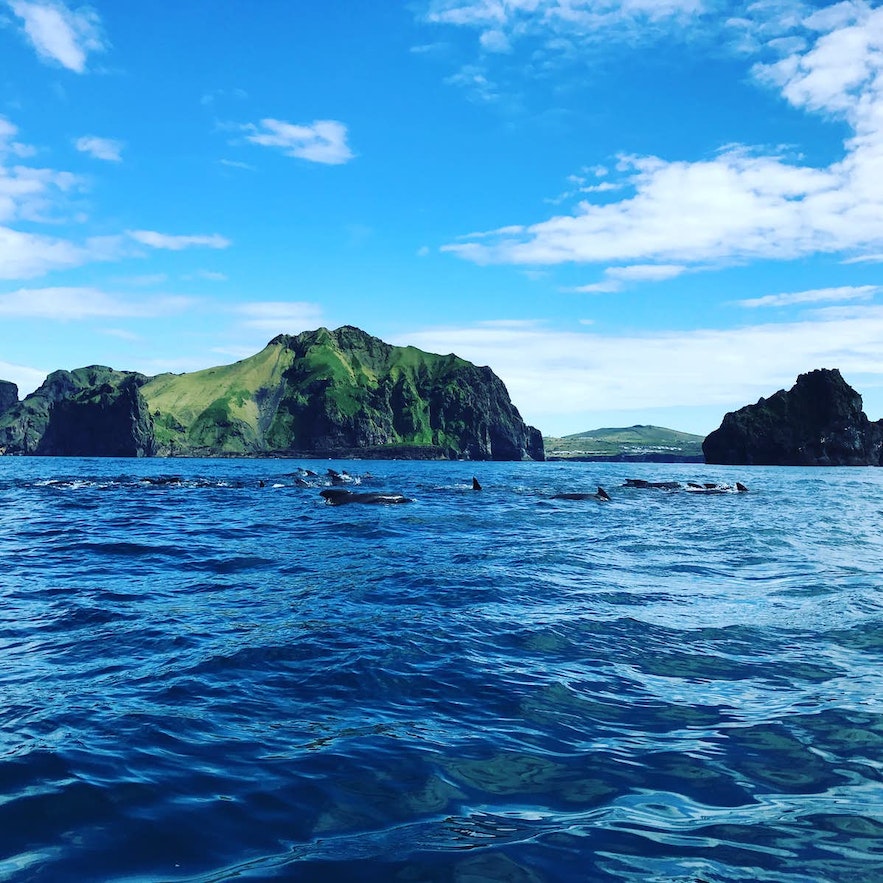 From the mainland, you can see the islands as a group of spectacular rocks rising up from the sea, huge and steep, topped with lots of green grass and white fluffy speckles being sheep. The archipelago is more accessible than ever with a new harbour in Landeyjahöfn. Now, the trusty Herjólfur Ferry only takes 35 minutes to cross, instead of the former, often sea-sickening, 3-hour journey.

Alternatively, you can book a flight from Reykjavík to the Westman Islands airport.

In June 2019 two Beluga whales, named Little White and Little Grey, made the 9,000km journey from Singapore to Westman Isles. With a combined weight of almost 2 tonnes, these Russian beluga whales eat around 20kg of herring and capelin a day and are far less ‘little’ than may be expected. The adorable mammals can be visited daily while in quarantine at the beluga whale sanctuary, and will soon be released into the sub-Arctic habitat of Klettsvik Bay. 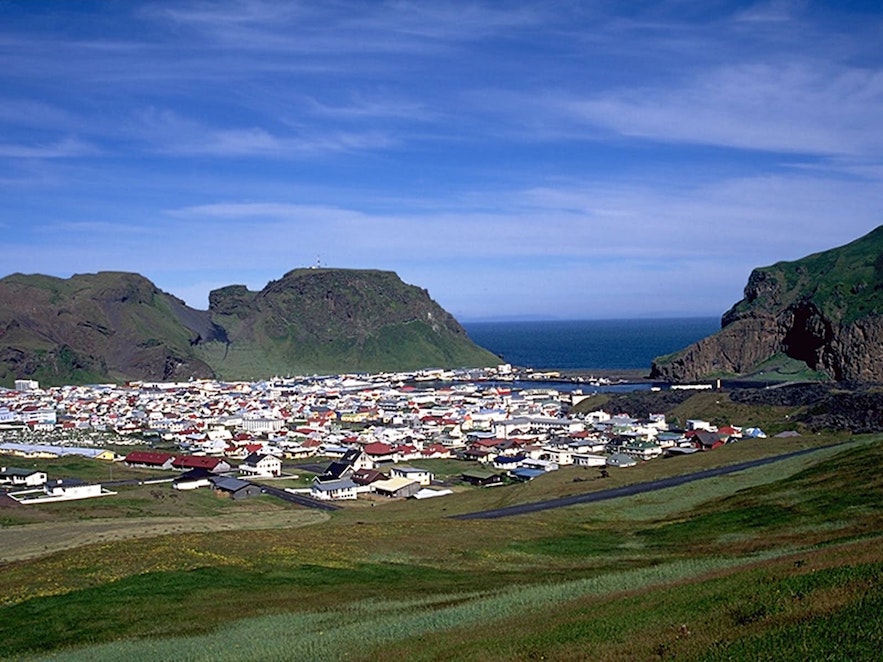 If you decide to visit in August, there is the ever-popular event of Þjóðhátíð, an annual camping festival held on the weekend of an Icelandic Bank Holiday. Then, Heimaey comes alive with local music, parties, bonfires and fireworks, as well as colossal amounts of alcohol. If you would rather enjoy the serenity of the islands, we recommend you go during any other time of the year!

We hope you enjoyed our guide to the five islands around Iceland most worth visiting! Here is a map that showcases the locations of each of the islands listed.