Extending over 40,000 square kilometres, the Icelandic Highlands ranks amongst Europe's largest unpopulated areas; they are both our island's throbbing heart and the wound by which the Earth gives birth to herself through the ancient volcanoes of the Mid-Atlantic Rift Valley.

The Highlands is a centre of raw and powerful energy, where new lands are forged and old lands are pushed to the west and to the east, onto the North American and Eurasian tectonic plates. 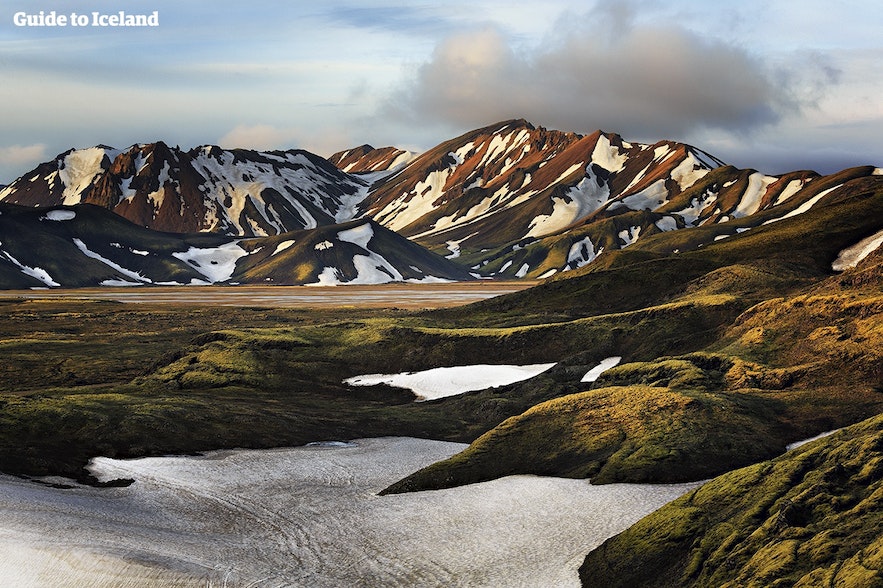 Mostly formed during the last ice age, the southern highlands are the youngest part of this enchanted circle; and they encompass many of Iceland's most seductive nature reserves, which steadily attract adventure-seeking travellers during the peak of the summer season.

When the snows have melted and the mountain roads are open and welcoming, in the southern highlands you will find the natural gems that I consider to be the top 5 destinations in the Icelandic highlands, all of which are accessible via bus tours or self-drive tours from Iceland's capital, Reykjavík.

Each year the roads open in late June or early July, and stay open until September.

Strange landscapes of roaring white rivers running through black desert sands that are contrasted with fresh oases of moss, fern, and birchwood make Þórsmörk one of Iceland's most popular hiking destinations. 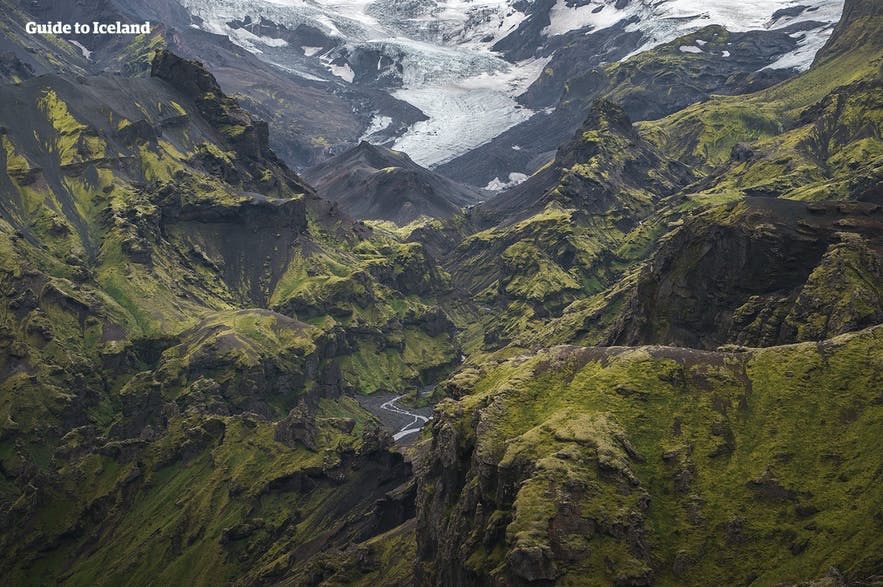 Þórsmörk's horizon is a crown of menacing mountain ridges whose ice-capped peaks are almost always cloaked in an eery veil of hypnotizing mist that comes to life when the warm air of the valley rises to meet the descending cold breath of the glaciers above.

These mountains are any hiker’s paradise, containing countless whispering caves and winding canyons and, therefore, some of Iceland's most astonishing hiking routes.

The 30 km Fimmvorduhals trail takes you into the steep hills beneath the towering Eyjafjallajökull glacier volcano, over the Fimmvörðuháls mountain ridge and to the steaming volcanic craters that were formed in the last volcanic eruption of 2010.

And Iceland's most famous hiking route, the 55 km Laugavegur trail, takes you from Þórsmörk and into the hypnotizing ripple in space and time that is Landmannalaugar.

Windswept and smooth, this geothermal marvel lies by the obsidian edges of the razor-sharp Laugahraun lava field, where it is flanked by rhyolite mountains whose vivid colors constantly change in accordance with the flow of the sun above. 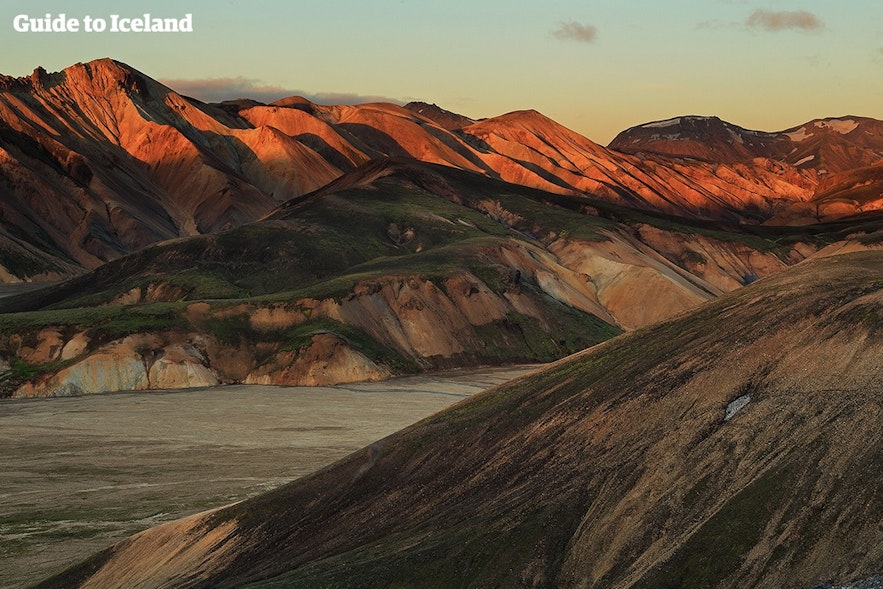 A Landmannalaugar Tour will take you to the captivating Ljótipollur explosion crater lake, the colorful Brennisteinsalda (Sulfur Wave) volcano of steaming vents and sulfur deposits, before allowing you to enjoy a sweeping view of five glaciers and the entire Landmannalaugar area from the top of the magnificent Bláhnúkur (Blue Peak) volcano. 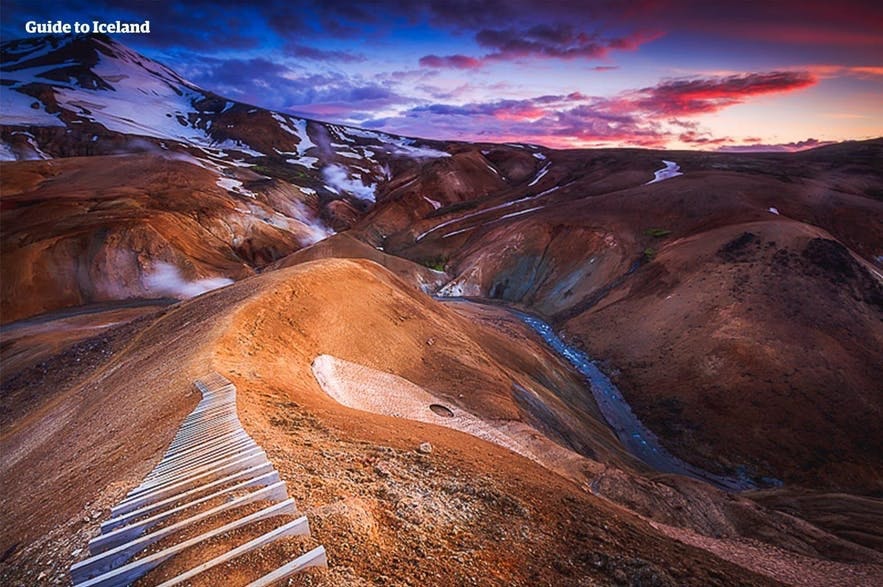 And a day of hiking will come to a perfect end with a dip in the warm streams of Landmannalaugar's natural pools, where for centuries, tired travellers have recuperated after their journeys.

Situated 30 km west of Landmannalugar is Hekla, one of the planet's most active volcanoes.

Having erupted catastrophically over twenty times since Iceland's original settlement, this primordial furnace has produced more voluminous lava fields than any single active volcano in the world and inspired more myths and legends than any other Icelandic natural phenomenon. 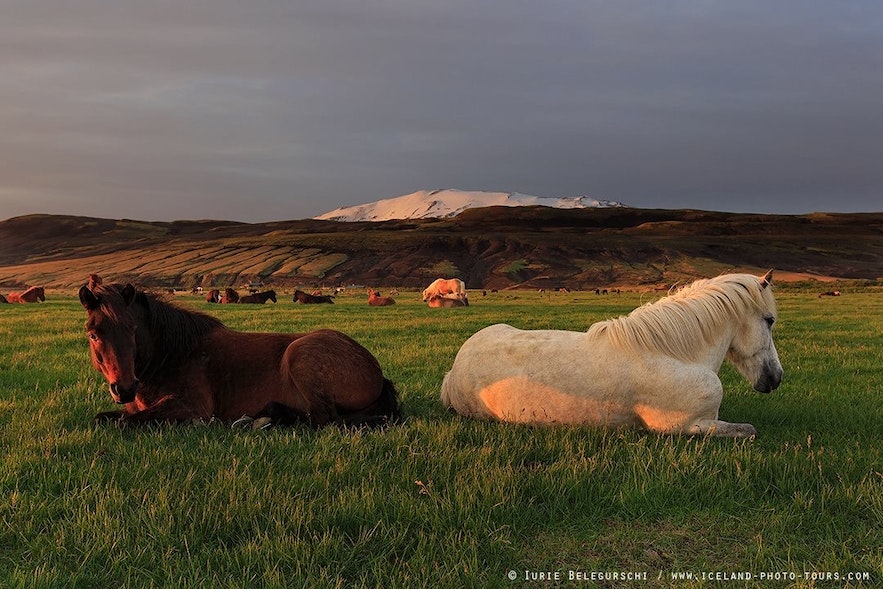 Hekla's earliest recorded eruption took place in 1104, after which extraordinary stories quickly spread throughout Europe, in which the volcano was linked to numerous diabolical entities, the black arts and finally hell and the devil himself.

A great choir of monks, priests, and anointed men trumpeted various theories wherein Hekla was the manifestation of an earthly purgatory. The souls of criminals, fornicators, drowned women, and non-believers were supposedly carried to Hekla’s summit on the backs of demons; and there the devil recited his psalms, tortured the damned on the fields of ice and snow, fried them in the fire, and tortured them in the snow again—that way, of course, the damned would never grow accustomed to the heat. 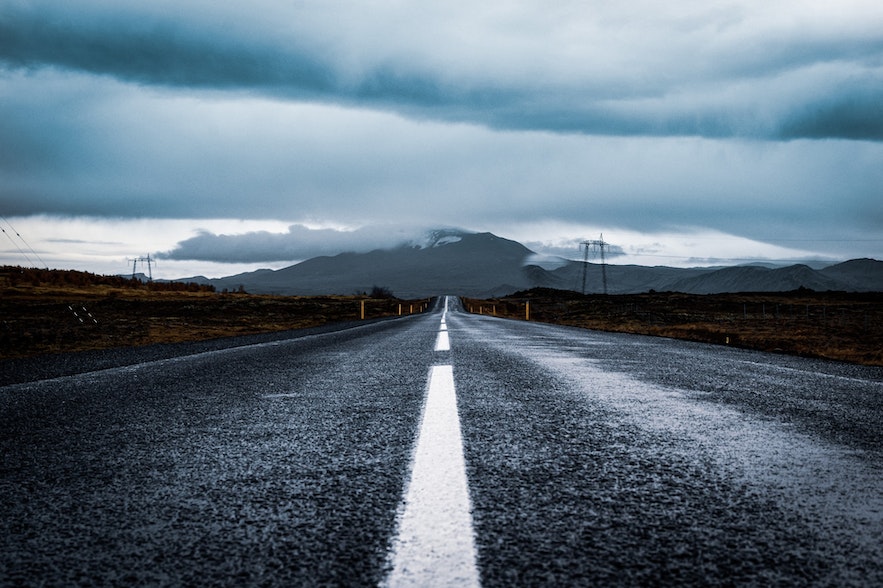 According to the Flatey Book Annal, people claimed to have seen heaps of bird-shaped souls flocking into the volcano's fiery furnace during the 1341 eruption, and in the mid 16th century, the German scholar and physician, Caspar Peucer, finally deduced that the gates of hell themselves could not possibly be found anywhere else on earth than in “the bottomless abyss of Hekla Fell”.

The popular belief that Hekla contained the gates to hell persisted until the late 19th century, but today the volcano's doomsday landscapes attract visitors from across the world who seek out Katla's tremendous slopes which have become one of Iceland's most popular travel destinations. 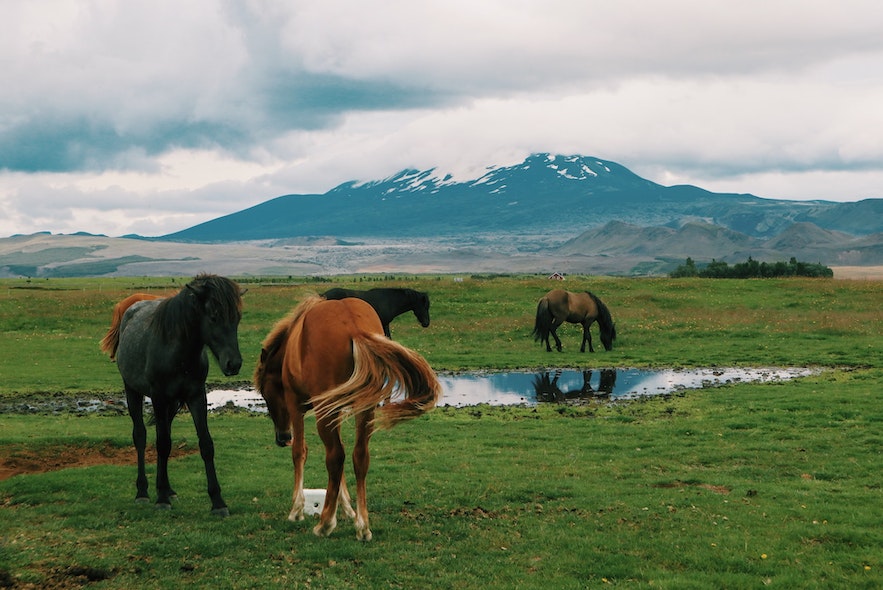 Reaching Hekla's summit by foot takes 3 to 4 hours, but a snowmobile tour in wintertime can take you to the top much faster. Hekla can be reached via the Landmannalaugar buses, and it is possible to stay or camp at farms in the area or the Hekla Leirubakki Visitor's Center.

Despite Hekla having erupted roughly every ten years since 1970, with her last eruption concluding at the end of February 2000, a tour onto the volcano is not a dangerous undertaking. Scientists constantly monitor Hekla and her surroundings and no one will be allowed anywhere near the volcano should it show the slightest signs of volcanic activity.

In the summertime, any old four-wheel drive can take you from Landmannalaugar, over the harsh terrain of the Kjölur desert mountain pass and into Kerlingarfjöll, a mountain range which is home to some of the strangest and most surreal landscapes on earth. 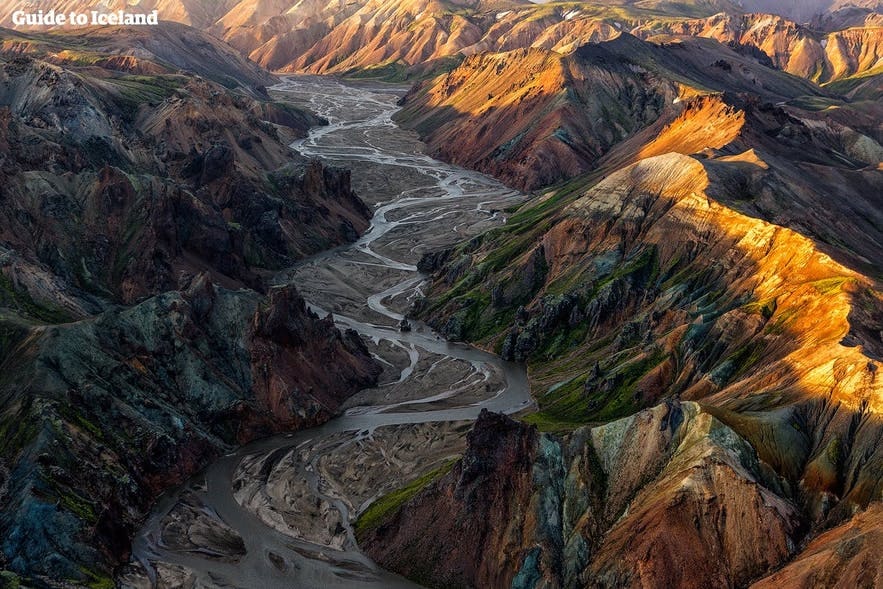 For centuries, Kerlingarfjoll were almost never visited as the area was considered too remote and harsh to explore, even though the nearby Kjölur highland road was the main summer pass between North and South Iceland.

In the mid 20th century, however, the area was developed into a summer ski resort where Icelanders skied on retreating glaciers and leftover winter snow.

In the summer of 2000, nearly all of the winter and glacier snow had completely melted from the slopes due to an ever-warming climate, but to this day the Kerlingarfjöll Highland Resort still offers accommodation food and services to a steady flow of travellers who seek out the area's raw energy and magnificent scenery. 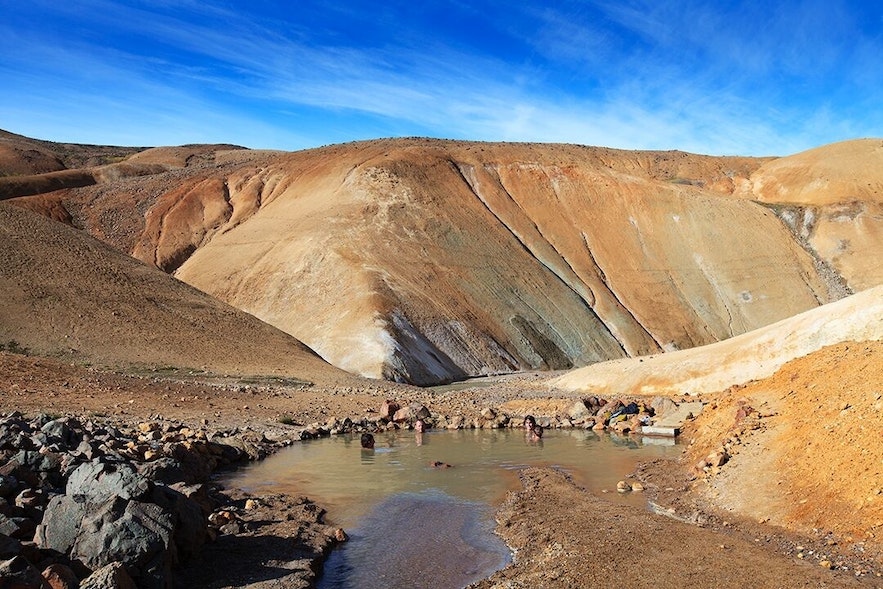 Within 5 kilometres from the Kerlingarfjöll Resort is the geothermal area of Hveradalir, a hot spring valley containing various marked and unmarked hiking routes which travellers could spend days traversing, but trekking the route from Kerlingarfjöll's highland resort to Hveradalir and back again is but a convenient one day hike. 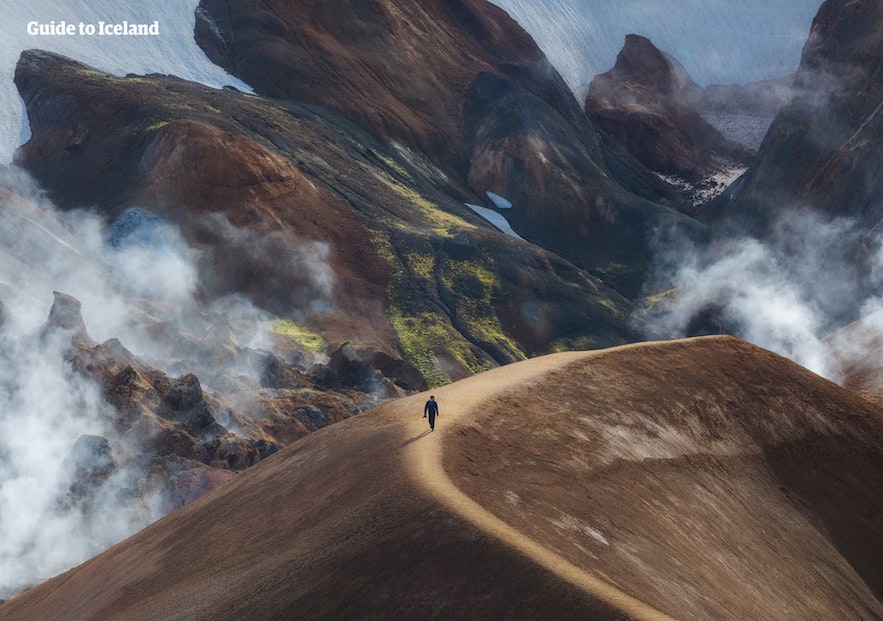 Formed by a constant duel of fire and ice, Hveradalir is one of Iceland's largest geothermal areas. A hike into Hveradalir is a journey into a powerful realm where natural hot springs and arctic vegetation compete with retreating mini glaciers that leave thawing hills gliding downwards, presenting travellers with the opportunity to see a landscape being forged before their own eyes.