The Ultimate Icelandic Playlists | Music For The Road

What are the perfect music playlists to match your vacation in Iceland? What are the most popular music genres? Who are the best artists to serenade your time in the country, and where can you access such great music? Read on to find out all you need to know about the Ultimate Icelandic Playlists.

The Joys of a Good Playlist

Iceland’s major attractions, be they waterfalls, geothermal valleys or volcanoes, are found across the island, meaning that driving is an essential part of anyone’s trip here—that is, for those who want to see as much of the country as possible.

This road tripping could take many forms (i.e. minibus, Super Jeep, private transfer, etc), and it cannot be stressed enough just how much time you'll be spending on the road.

To provide some context; Jökulsárlón glacier lagoon, widely regarded as “The Crown Jewel of Iceland” is located roughly five hours from the capital city, Reykjavík, meaning the journey there and back will total approximately ten hours driving... and that’s without mentioning the countless stops en route. 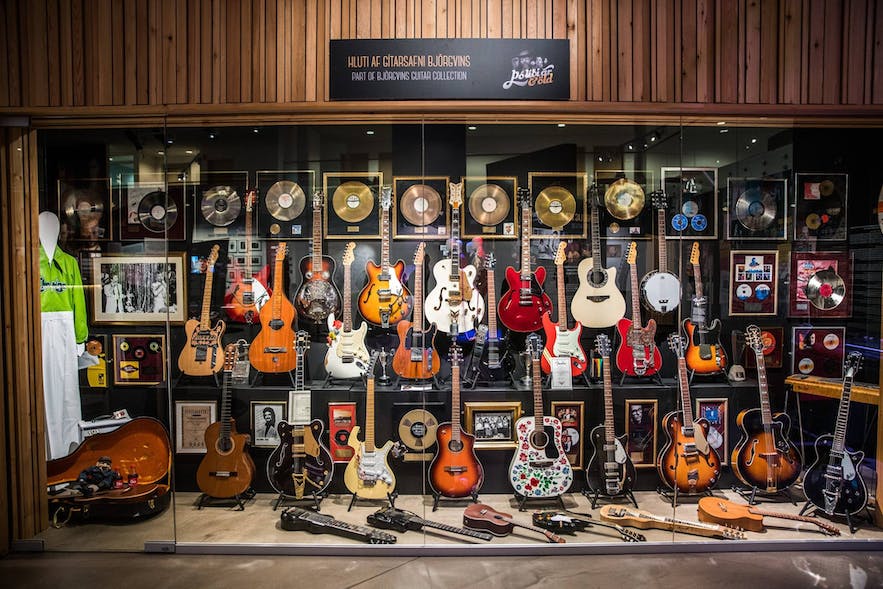 In short, its best to ensure your car journey is as comfortable as possible, allowing you to relax and appreciate the wealth of brilliant scenery without issue. Sunglasses for the road? Check. Snacks and drinks? Check. Cushion for the lower-back? Check. Music bopping on the car radio? ... let’s examine this aspect a little closer, shall we?

One of the major components for any road trip is a worthy playlist, as effective at setting the mind free to wonder as it is suppressing the tantrums of your children in the back seat.

Your car journey, in all likelihood, will be made with the express intention of discovering this country’s incredible scenery, or, to a lesser extent, its charming towns and village, and focusing in on playing Icelandic music is the only soundtrack that suits quite so poignantly. 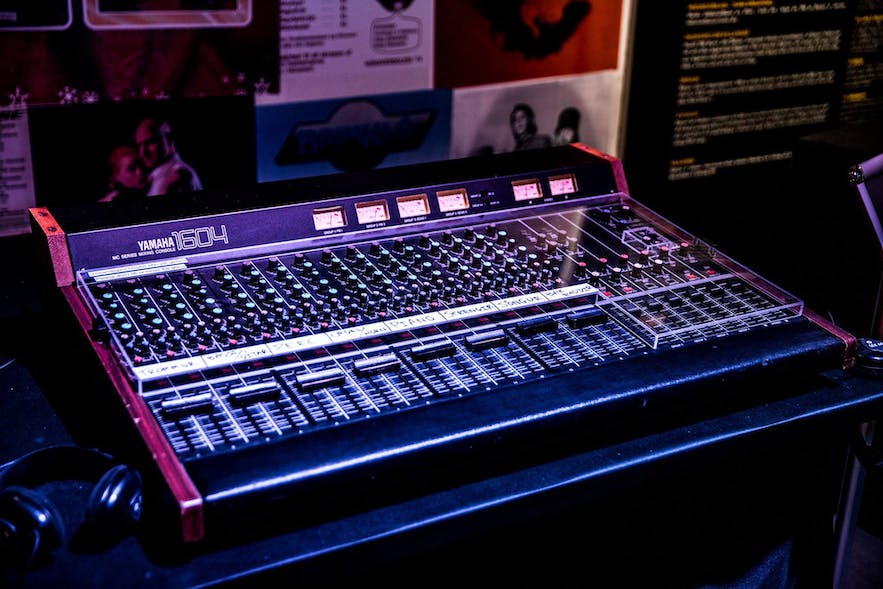 To put it another way, if you’re setting out to find Icelandic culture, you’ll gain just as many insights from the culture you allow into your own holiday bubble. Listening to music on your journey is one of the easiest ways to achieve this, allowing a new level of insight when understanding the Icelandic psyche. On top of that, it also heightens the authenticity of your adventure.

Though it is unlikely you'll understand the lyrics, the melodies, harmonies, instrumentation and vocal talent will transcend, providing a rich and local ambience to your trip.

Music is as broad and varied as the nature itself, giving it a worldly, crossover appeal that can’t help but reflect the lands of its origin, regardless of the genre.

In other words, we all have different tastes, which is why we here at Guide to Iceland have compiled, for your listening pleasure, a number of genre-themed playlists that showcase the very best of Iceland's rich musical scene.

Nothing quite says "Road Trip" like rock n' roll blaring from your car stereo. After all, this genre boasts the perfect sing-along-qualities, embraces freedom and rebellion, taking life by the bootstraps and giving it a damn good shake. One should enjoy those moments of awe, inspiration, confusion and lust for life that travel awakens in us; let's face it, you came to Iceland after all!

Whilst there are some belters already widely utilised―Bruce Springsteen's 'Born to Run', for instance, or Queen's "Don't Stop Me Now"―there is a good chance that there are many original Icelandic rockers that better suit your trip in the country. 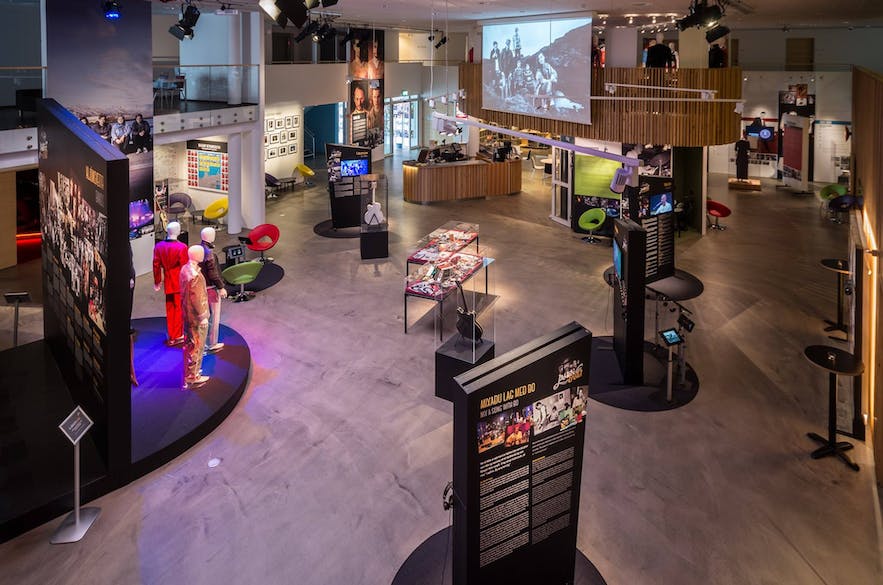 Anyone who has spent time at Rokksafnið―the Icelandic Museum of Rock n Roll, in Keflavík―will know of Iceland’s deep connection to rock music. This passionate relationship was first inflamed in the 1960s, during a period in which Icelanders were introduced to the American music played on the US Navy Base, on the Reykjanes Peninsula.

One of the most popular films dedicated to the birth of rock n’ roll in Iceland is the 1982 documentary, “Rokk í Reykjavík”, directed by the legendary auteur, Friðrik Þór Friðriksson. Among other things, Friðrik introduces his audience to such acts as Björk, then known through the act, Tappi Tíkarrass, and the new-wave outfit, Þeyr. 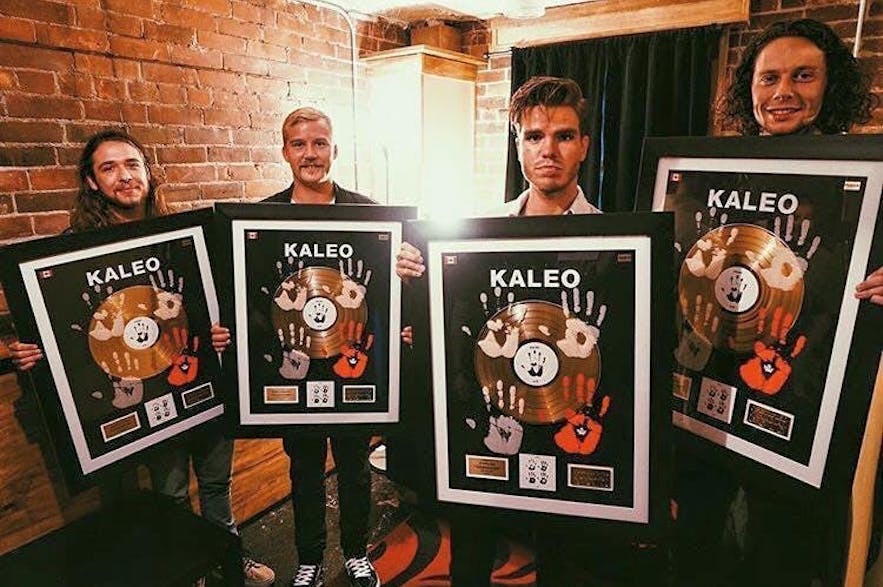 Ever since this period of musical revolution and discovery, rock n’ roll in Iceland has gone from strength to strength, with the most successful exports being Björk, the ethereal post-rock band Sigur Rós and the country-rockers, Kaleo.

Black and death metal have a strong and loyal following, both domestically and internationally, with numerous venues across the country dedicating themselves to providing regular, rollicking live performances.

On other nights, the Icelanders' passion for blues and traditional hard rock comes alive in communal jams, concerts and street performances, proving that rock n' roll is still very much alive and well in the Icelandic mentality.

Iceland has become famous for its unique take on rap and hip-hop music, matching a worldwide trend in this genre's exponential popularity. And whilst many of its tracks may seem a little too aggressive, even grimy, for a serene car ride along Iceland's picturesque South Coast, there can be no better soundtrack for your time discovering the country's capital, Reykjavík.

One of the most notable aspects of the Icelandic rap & hip-hop scenes is the abundance of female artists, the most prominent of which is Reykjavíkurdætur ("The Daughters of Reykjavík"), a rap collective of 19 self-styled fem-cees known equally for their collaborative and solo efforts. 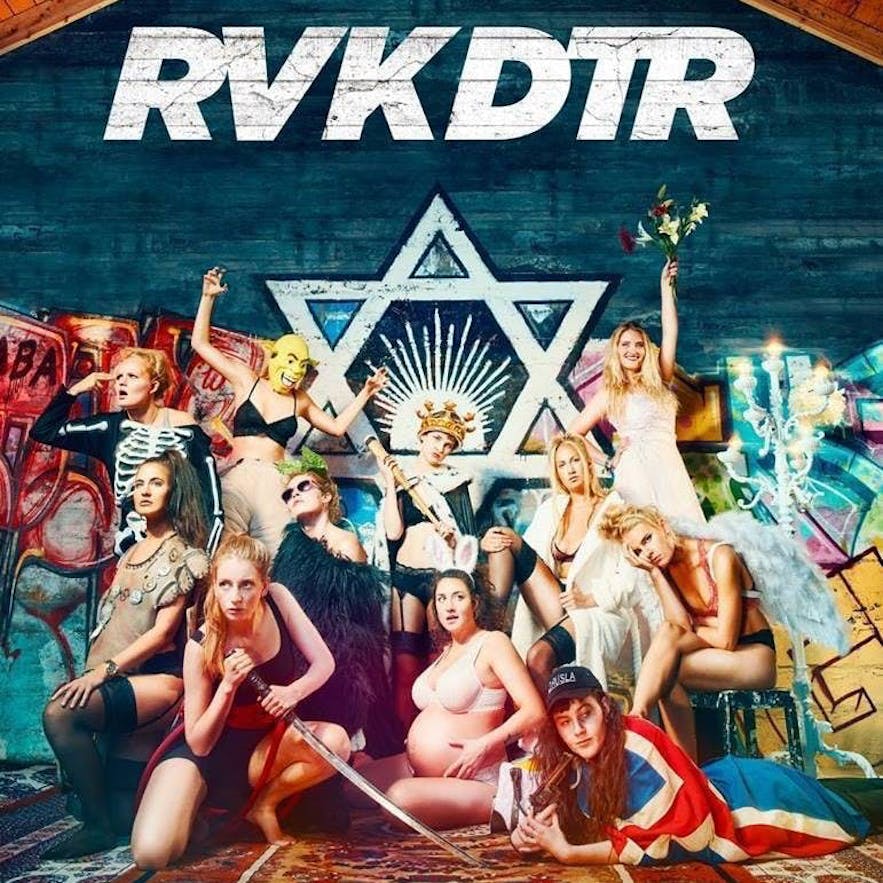 Reykjavíkurdætur were among the first acts to sculpt and define the uniquely minimalist sound of Icelandic rap and hip-hop. Once again, the best examples of this sound are reflective of the country's hauntingly beautiful nature, and the distance, the coming of age that dawns upon a nation transitioning from rural to urban life.

If one listens close enough, this bi-polarity can be heard in almost all genres of Icelandic music, not just in production style, but image, attitude and creative approach. 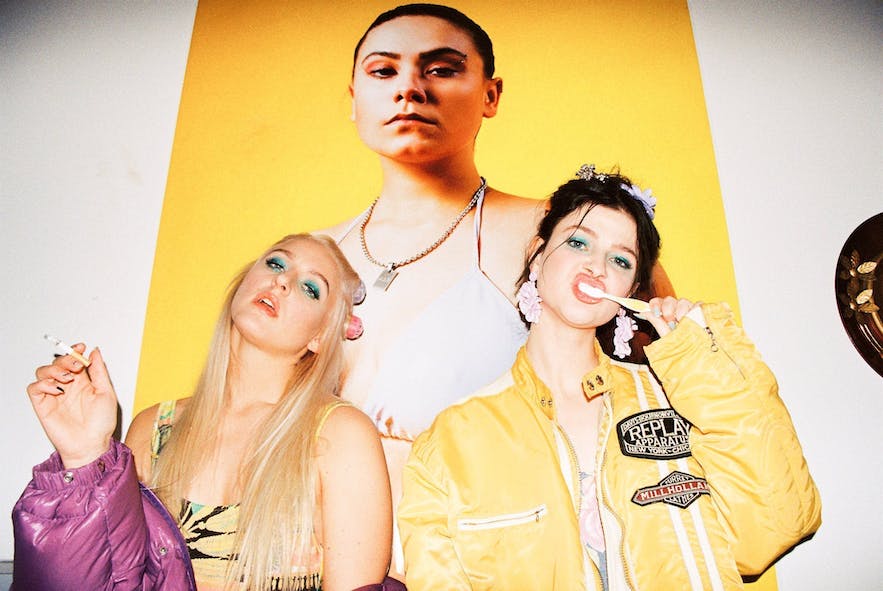 Hip-hop and rap is so popular in Iceland, a concerted effort is needed on part of the die-hard fans to keep up-to-date with the latest artists on the scene. Other artists worthy of note include the likes of: Úlfur Úlfur, Emmsjé Gauti, Gísli Pálmi, Birnir, Kött Grá Pje, Valby Bræður and Sturla Atlas . To find out more about the genre's popularity in Iceland, read more in our article Hip Hop & Rap in Iceland.

Folk music has its own special place amongst music aficionados in Iceland. Many point to this nation’s long tradition of oral storytelling as a reason for this, as well as the strong, collective awareness of people’s connection to nature.

One aspect often overlooked in trying to unravel this relationship between the Icelandic people and folk music, is the live performance element. In our modern world, where entertainment of all kinds is within touching distance, it is easy to forget just how crucial communal music was to this earth's ancient peoples.

One can see these roots the moment Icelandic folk is explored further; take ‘Rímur’, for instance, a form of epic poetry that dates back to the 14th Century. These poems were known to the best method of telling a story in a single verse, with a reliance put on syllable structure and alliteration. 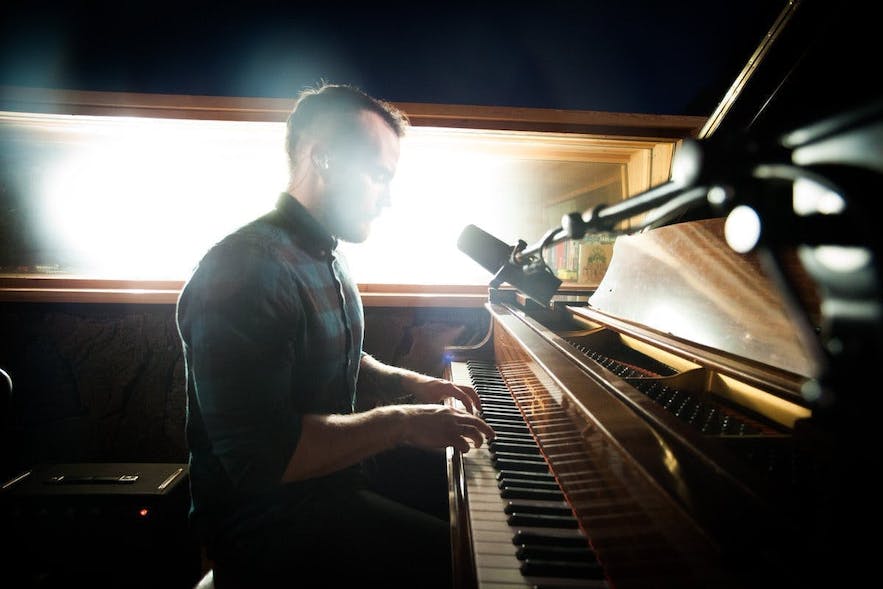 Alternatively, one could look at the different styles of singing, kveða and syngja, as further proof of Iceland's ties to traditional music. These performances were also deeply related to both poetry and dance, though the advent of Western Classical music has seen a decline in this style over the years.

In the modern age, the boundaries that define folk music in Iceland have become blurred in a flurry of innovative creation, largely in the wake of portable production software, electronic experimentation and the aforementioned cultural balance between urban and rural life here. Popular artists include such acts as Of Monsters and Men, Ólof Arnalds, Snorri Helgason, Emilíana Torrini and Ásgeir Trausti.

With the long dark winters of Iceland matched with the advent of portable, music-making technology, Icelanders have become adept at creating rich and textured electronic tracks from the comfort, and warmth, of their bedrooms.

As Icelandic electronic producer, NonniMal, recently stated: “We’re locked inside a lot of the time due to bad weather, so we have to make our own fantasy worlds.”

These ‘fantasy worlds’ have become some of the most striking and experimental digital soundscapes in international music, the steps, rhythms and samples often reflecting the harsh, empty and isolated land of its genesis. 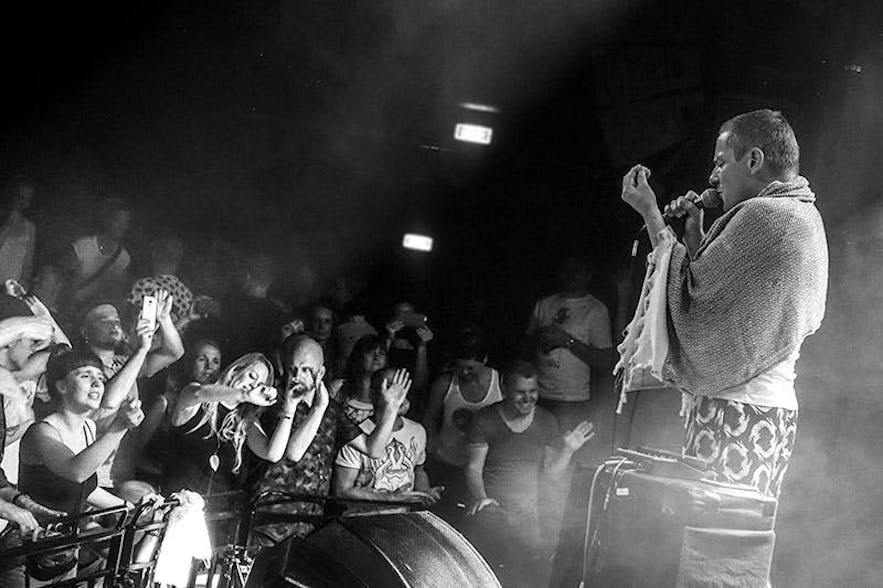 One of the most striking examples is Björk, who since her first solo effort, Debut (1992), has forever pushed what it means to make electronic music. Most recently, Björk has continued to stand tall as the foremother of electronic music, creating Björk Digital, a VR experience intertwined with the 2015 album, Vulnicura.

GusGus is also one of the greatest electronic exports to come from Iceland, their efforts making a valid contribution to the world of dance music, trip-hop, house and techno.

Upon their founding in 1995, GusGus acted as a film and art collective before the members decided to reshape their focus on a musical career. As of today, the group boasts 10 full-length albums, as well as numerous collaborations with other artists, including Björk, Depeche Mode and Ian Brown of Stone Roses fame.

Quite unlike most other European countries, Iceland has had only a short history writing, recording and performing classical music, with the first efforts being made as late as the early twentieth century. The first case of an organised orchestra concert in Iceland can be dated back to May 22nd, 1921, when roughly twenty musicians played for King Christian X of Denmark, who was on an official visit at the time.

Without fully realising it, this group would become the Reykjavík Orchestra, and would later play at some of the country's most important historical events (i.e; the 1000 year anniversary of the Icelandic parliament, held at Þingvellir in 1930). 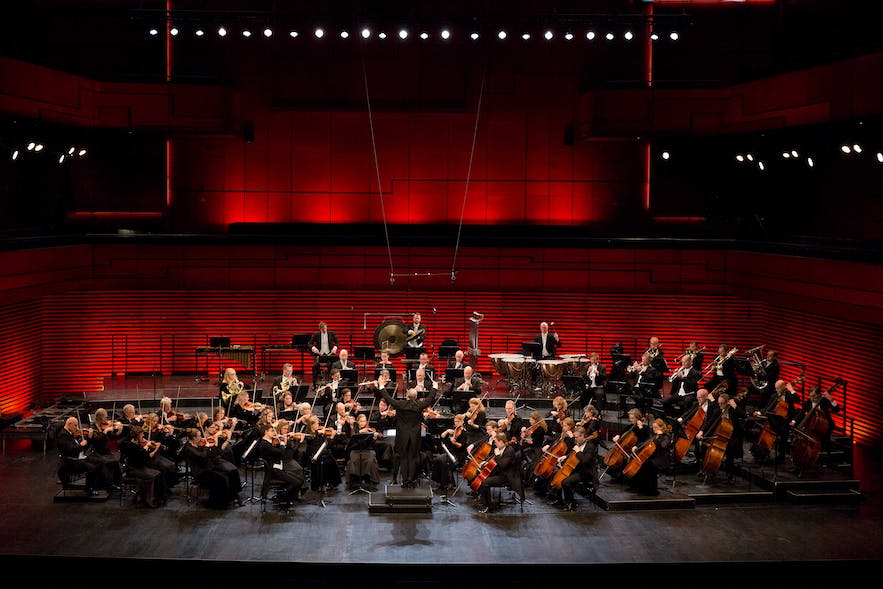 Still, there was much discussion around this period about formalising a professional orchestra, though the proposal would need to hurdle a number of financial obstacles first. Finally, the National Radio, (Ríkisútvarpið; RÚV), agreed to fund the project, and the Iceland Symphony Orchestra went on to play their first concert on  March 9, 1950.

The Iceland Symphony Orchestra has appeared on over 87 published albums and is famed for its frequent collaborations with popular musicians, a trend started on 19th November 1978 after they were joined on stage by Gunnar Þórðarson, the principal songwriter of Thor's Hammer.

Did you enjoy our article "The Ultimate Icelandic Playlists | Music for the Road"? Did you use any of our playlists during your time in the country? What are your favourite tracks and artists to come out of Iceland? Are we missing some of your favourites? Make sure to leave your thoughts and queries in the Facebook's comments box below.

Where are the best venues for live music in Iceland? What type of live music is regularly performed in Reykjavík? Read on to find out all there is to …
Read more

How did hip-hop become one of the most popular musical genres in Iceland? Who are the biggest artists on the Icelandic hip-hop scene, and how long has…
Read more
Guide to Iceland
Explore Iceland
Music In Iceland
The Ultimate Icelandic Playlists | Music For The Road