Book your trip
Rent a car
Vacation packages
Explore Iceland
Book your trip now
Jump to chapter
8. Bathe in a Hot River in Reykjadalur Valley7. Snorkel Between Two Continents in Silfra6. Hike the Laugavegur Trail5. Ice Climb on Solheimajokull Glacier4. Join a Whale Watching Tour From Husavik3. Enter the Heart of a Volcano2. Swim in the Infinity Pool in Hofsos1. Enter an Ice-Cave 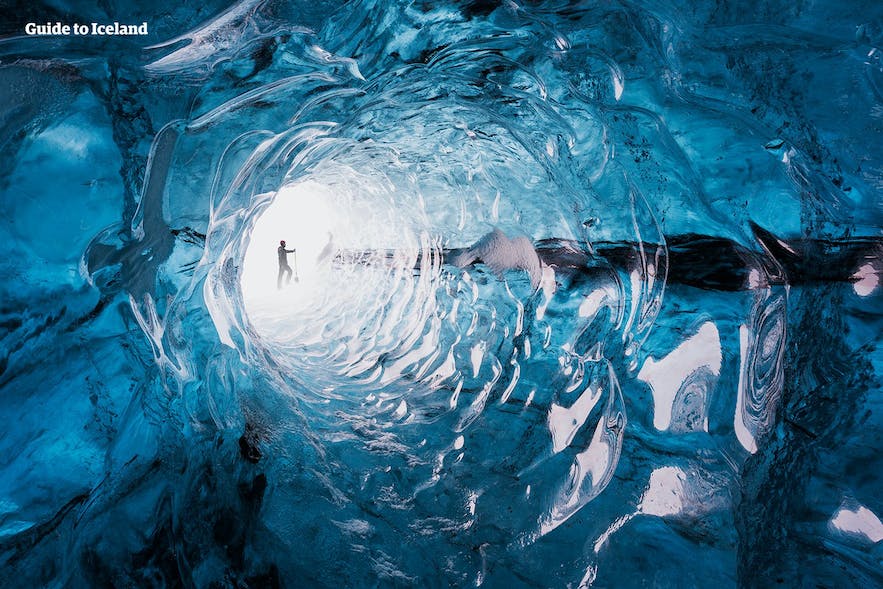 What travel experiences are fundamental to making any visit to Iceland unforgettable? What Icelandic attractions and activities are simply too unique and captivating to be left unexplored? Keep reading and tick off the essentials that make up The Ultimate Iceland Bucket List.

When you first come to Iceland, the number of possible trips and experiences can be overwhelming. There’s always more to see, more to do. 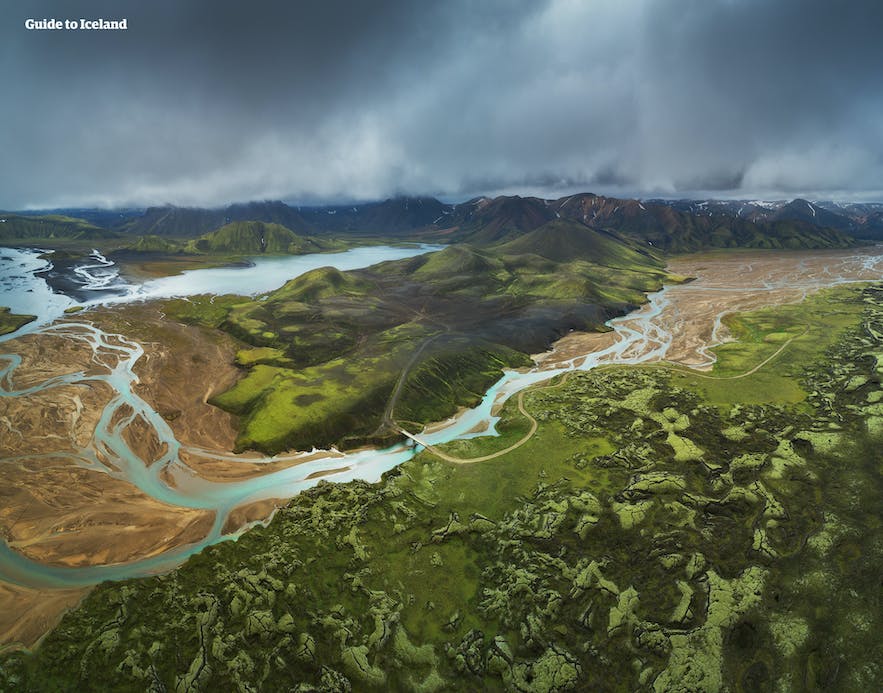 Iceland is the land of fire and ice, a volcanic island in the north Atlantic, powered by geothermal energy and fed by the bounty of the sea. Its location, geology, and culture define its identity.

Its amber summer nights are contrasted by the dancing green spectre of the northern lights in the black skies of winter; its obsidian desert expanses are lined with roaring rivers; and ancient glacier giants watch over its lush, green southern oases.

The list below is incomplete—actually it’s impossible to list everything Iceland has to offer. Hopefully, however, the list will leave you with a longing for travel, exploration and adventure, that will one day become a collection of warm memories that will stay with you for life.

8. Bathe in a Hot River in Reykjadalur Valley 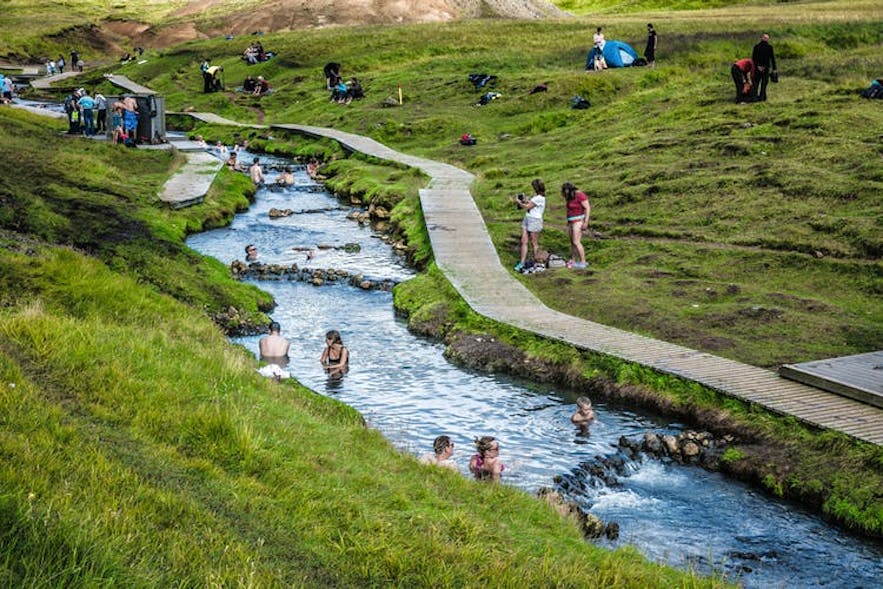 If you ask any Icelander what’s the first thing they miss when they leave Iceland, the answer is usually one thing: the water.

Whether it’s the cool glacier water that pours through every faucet in the nation or the boiling sulphuric water heated by geothermal energy, water is an integral part of Icelandic culture.

Almost every town and neighbourhood has their own pool. It’s an old joke in Iceland, that all politics and business are really conducted in the hot pots at the local swimming pool.

The first settlers of Iceland, however, did not have the luxury of swim-up bars and tiled hot pots. They swam where a steaming hot spring fed into a cool river, making a lagoon with an ideal temperature for bathing, and even doing laundry. 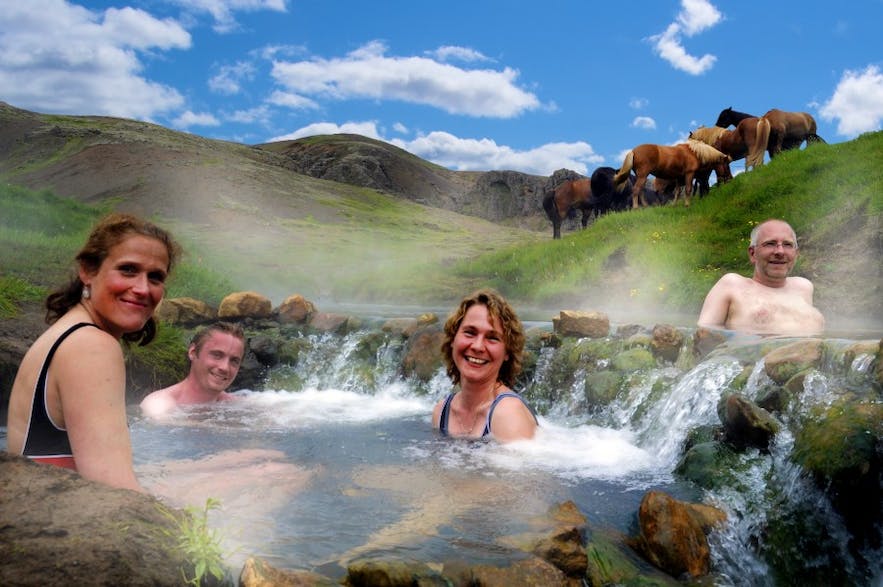 ​​​​Reykjadalur, or “Steam Valley”, is just a three-kilometre hike from Hveragerði town in Southwest Iceland. The hike begins in the parking lot of Dalakaffi, a great little restaurant and the perfect place to unwind after you get back.

Eventually, you come to a river with a boardwalk where you can take a swim. Depending on how upstream or downstream you are will change the temperature of the water.

Simply find the perfect temperature, locate a good spot, jump in and relax while the warm stream soothes away all tension and stress.

7. Snorkel Between Two Continents in Silfra 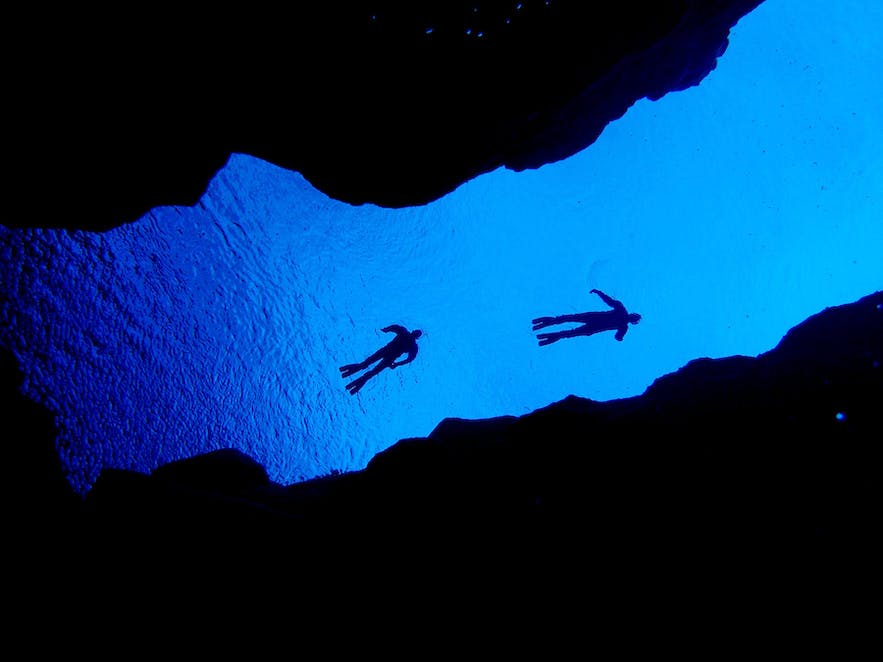 In the UNESCO World Heritage Site of Þingvellir National Park, is Silfra fissure. This otherworldly diving spot is located in the middle of the rift that separates the North American and Eurasian tectonic plates.

Renowned for its unparalleled underwater visibility, Silfra attracts divers and snorkellers from across the world, who all long to experience first hand the underwater landscapes the lie between two continents. 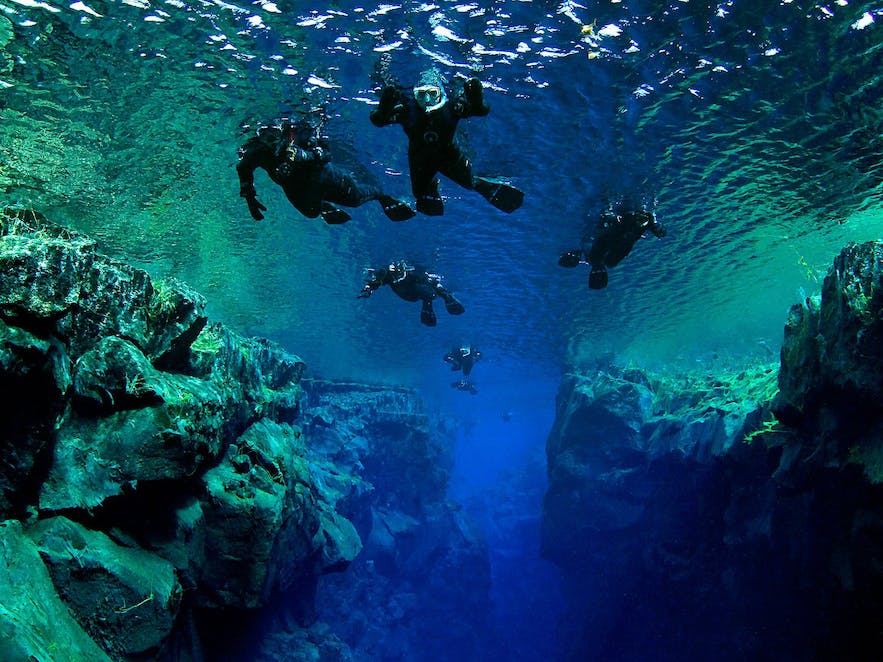 There, the two tectonic plates are steadily drifting apart at a pace of 2 cm  (0.8 in) per year, and as tension builds, the filtrated water is pressed upwards and into Silfra, making it one of a handful of places on this planet where underwater visibility can exceed 100 m (328 ft).

No, we’re not talking about Reykjavík’s high street, home to the capital's infamous nightlife. We are talking about one of the most famous hikes through the Icelandic highlands, a 55-kilometre trek from Landmannalaugar to Þórsmörk: the Laugavegur hiking trail. 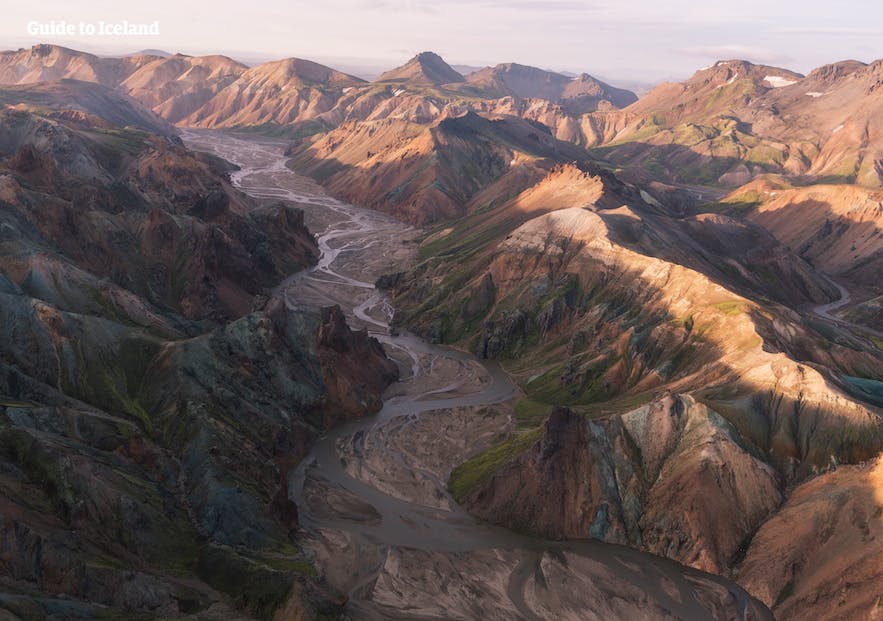 Landmannalaugar is a large area of stunning beauty, and is often considered to be the very heart of Iceland's southern highlands. It is sought out by hikers and nature lovers from across the world, who are drawn to its otherworldy rhyolite mountains, the abundance of hiking trails and numerous natural hot springs. 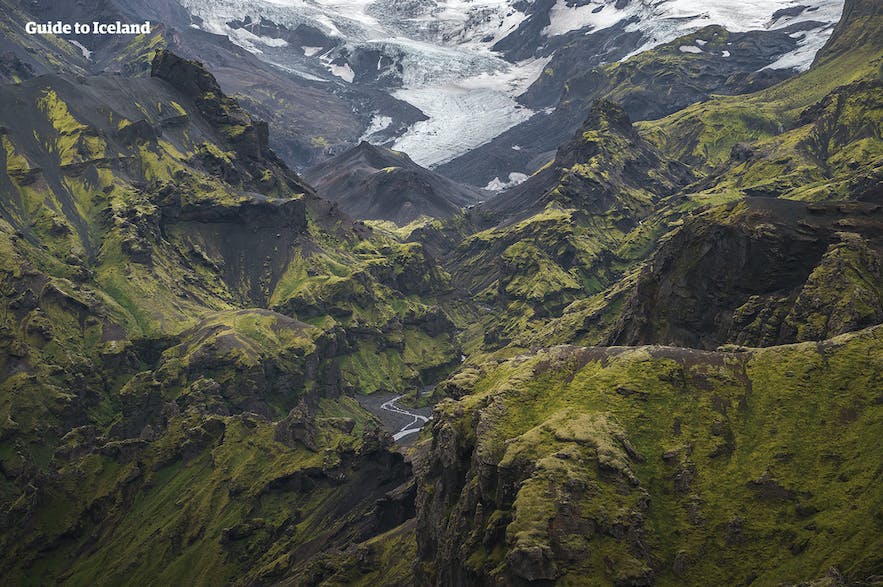 Þórsmörk is a mountain ridge and valley named after Thor, the temperamental god of thunder. Þórsmörk's strikingly beautiful landscapes of green oases and dark volcanic expanses make the area unique both to Iceland and the rest of the world.

Large parts of the valley are rich with sub-arctic flora, such as moss, fern, and birchwood, and towering, snow-capped peaks crown the horizon. 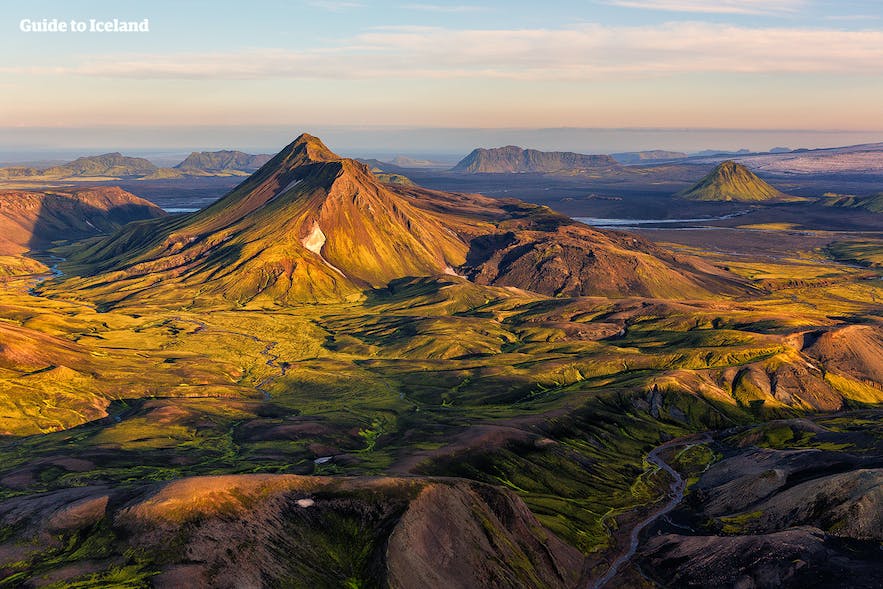 National Geographic has ranked the Laugavegur amongst the most beautiful hiking routes in the world. It usually takes between four and six days to complete, and hikers either make use of sleeping bag accommodations found in huts along the trail, while others choose to camp and sleep in their tents.

Access to the trail varies from year to year and depends on weather and road conditions. On average, however, the trail is open from June 25 to September 15. 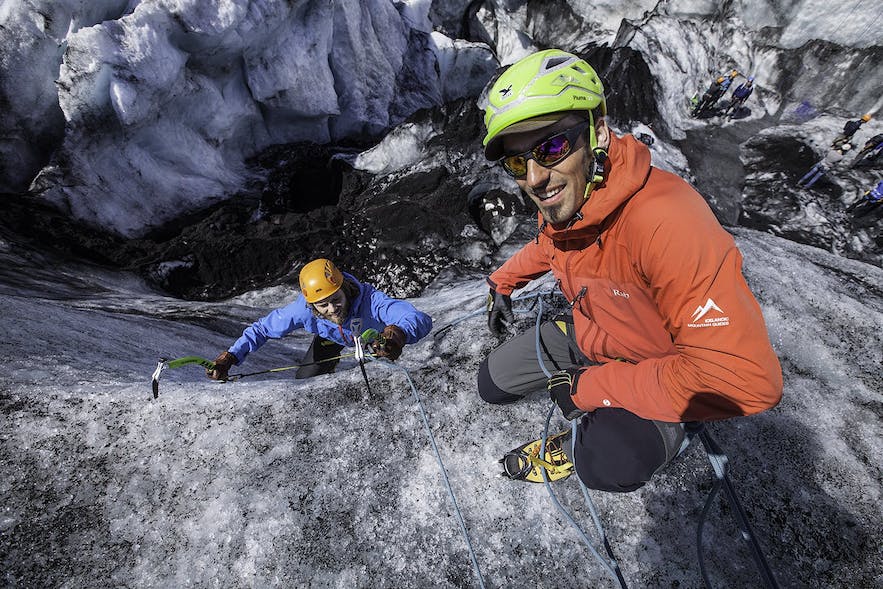 From top to bottom, the ice cap is thoroughly scarred by its ruthless neighbour in the north, the fierce Katla, one of Iceland’s most active volcanoes.

Older generations knew Katla all too well, and they knew to be afraid. She last erupted in 1918, causing devastation and destruction, and until then, eruptions had occurred at an interval of 13 to 95 years.

Although Katla is very volcanically active indeed, you can rest assured that the local guides will never steer you into danger. Scientists constantly monitor the area and issue stern warnings if they detect the slightest hints of volcanic activity. 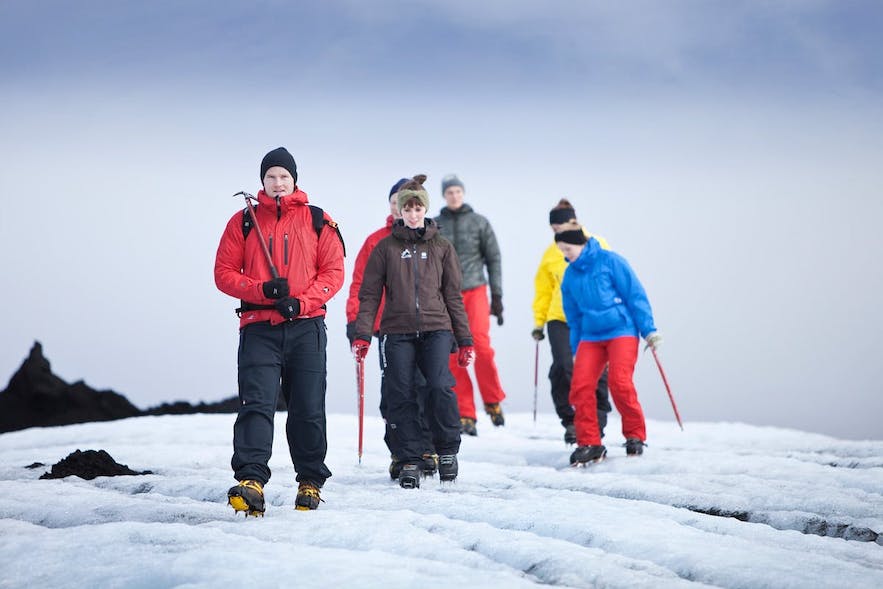 Because of Katla volcano, Sólheimajökull glacier is host to otherworldly landscapes of ancient ash, rugged rock formations, impassable ice ridges and gaping water cauldrons, and an excursion onto this ice cap is bound to leave long-lasting memories. 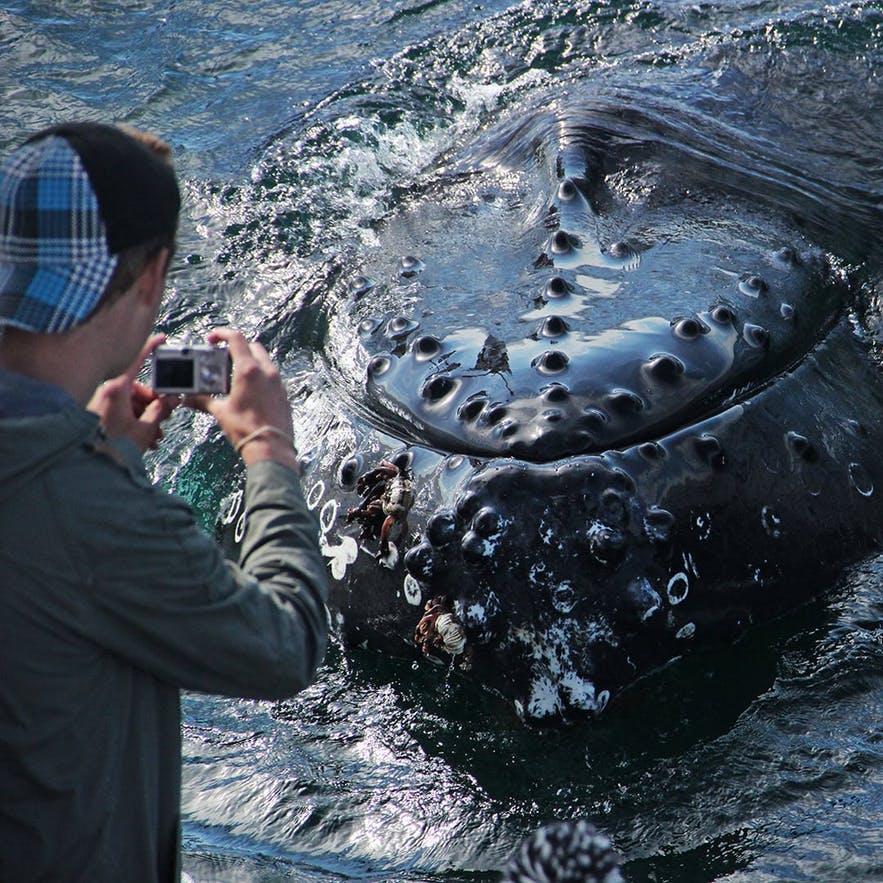 There are many places to go whale watching in Iceland, but Húsavík offers the most intimate up-close encounter you can get with our mammalian neighbours and is, therefore, often called "Europe's Whale Watching Capital".

This northern town is uniquely placed for whale watching as its waters are home to virtually all of the 23-species of whales found around Iceland.

The chances of seeing a specific species on a whale watching trip in Iceland depend on the port of departure. The magnificent Minke whale is by far the most commonly sighted animal in Húsavík's waters and can be seen throughout the year.

Húsavík is within driving distance of Akureyri, the capital of the north, and the wonderful Lake Mývatn. The whole area is worth your time so plan to stay a while.

3. Enter the Heart of a Volcano 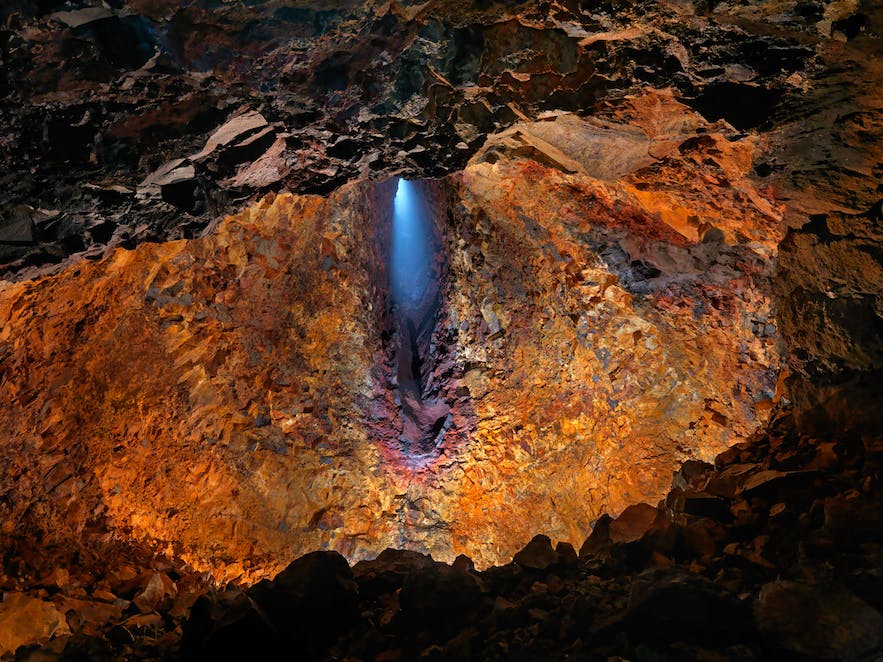 Photo from: Thrihnukagigur Volcano Tour: Go Inside a Magma Chamber.

Iceland’s volcanic nature is perhaps nowhere better encapsulated than in Þríhnúkagígur (Three Peaks Crater), the only known volcano on earth, the magma chamber of which is accessible to man.

Only 20 km east of the capital area is the Bláfjöll Country Park, a volcanic wonderland through which explorers must trek before reaching Þríhnúkagígur’s summit.

Once there, they will enter an open cable car, pass through a narrow, funnel-shaped opening, and slowly descend 120 metres into the cold heart of the dormant volcano. 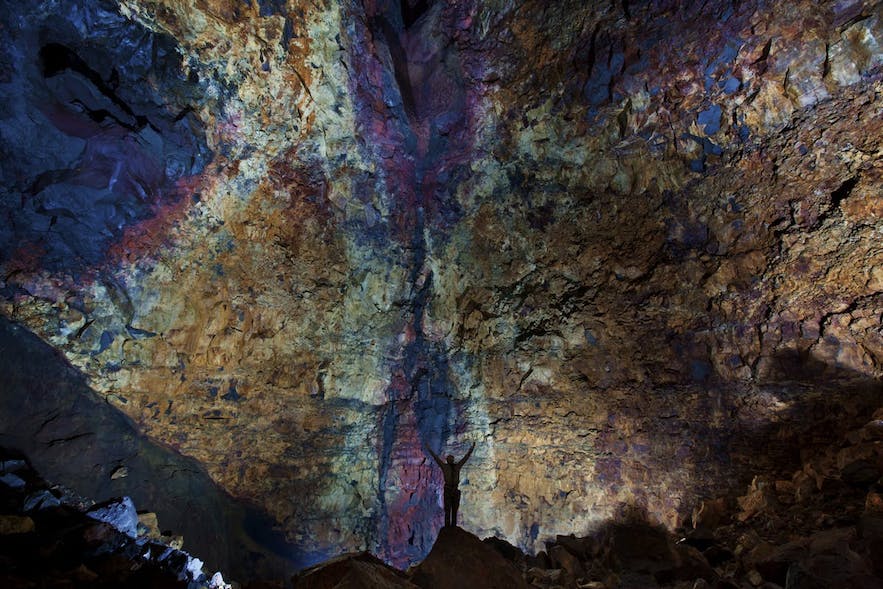 Photo from: Thrihnukagigur Volcano Tour: Go Inside a Magma Chamber.

Þríhnúkagígur’s magma chamber is titanic—the ground floor is the size of a large football pitch—but the fact that it exists at all, is a mystery that has baffled geologists for decades: it should not be there.

Normally, the magma chambers of dormant volcanoes are completely filled with cold, hard lava, but for unknown reasons, the lava in Þríhnúkagígur disappeared after the volcano’s last eruption, leaving its naked inner walls exposed.

The walls' vibrant shades of orange and red convey stories of hellfire and terrible destruction, and dwarfed by the overwhelming intensity of their presence, one is bound to be confronted with fundamental questions concerning the futility of one's existence.

Many have likened an excursion into Þríhnúkagígur’s magma chamber to an expedition into the very heart of nature itself, while many others have simply found the journey to be beyond compare.

2. Swim in the Infinity Pool in Hofsos 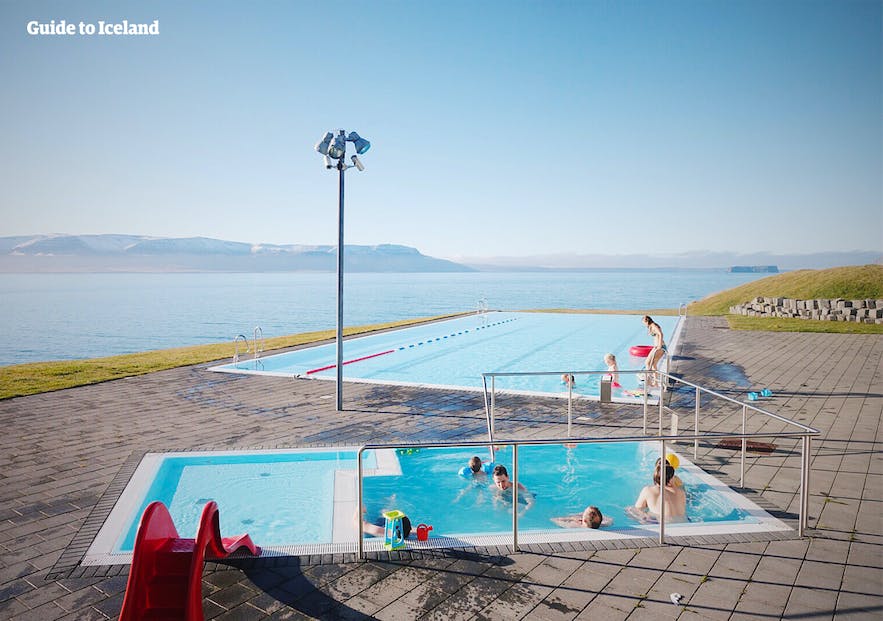 Have you ever wanted to swim in an infinity pool nestled against the coastline of the Atlantic Ocean, heated by the very bowels of the earth? Well, you’re in luck. This pool in the small town of Hofsós is an architectural marvel and the perfect relaxing way to spend an afternoon.

Hofsós’s swimming pool was designed by the same architect as the Blue Lagoon. It’s bright blue contrast with the murky sea and your view is a panorama of mountains. There are even boat cruises available if you want to get an even closer view of the astounding coastline. 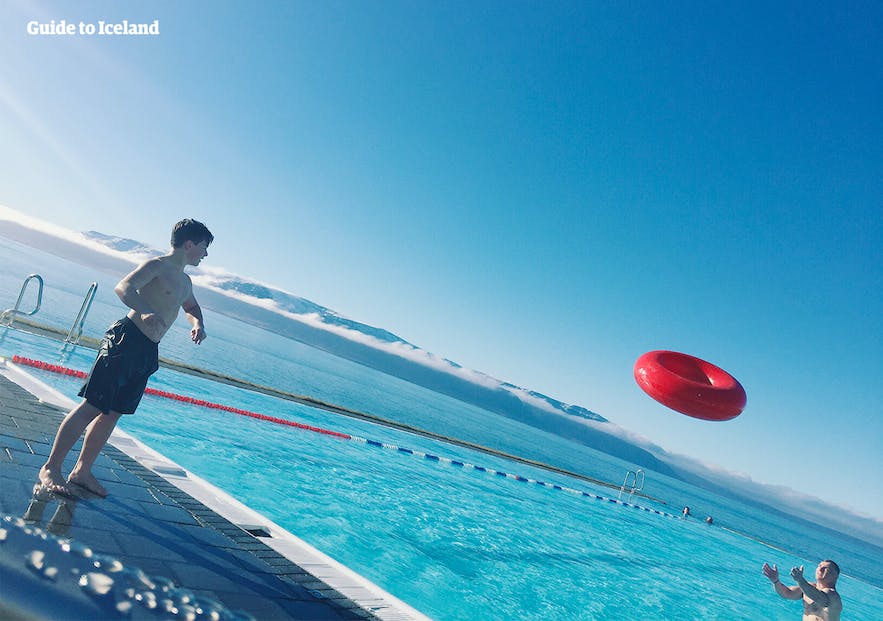 Hofsós is one of the oldest ports in northern Iceland, established in the 16th century. It’s also home to the Icelandic Emigration Museum, which details the mass migration of Icelanders in the late 1800s to North America.

This mass-migration resulted in the creation of “New Iceland” a series of settlements around Lake Winnipeg in Manitoba, Canada, the most notable settlement being a town called Gimlí. 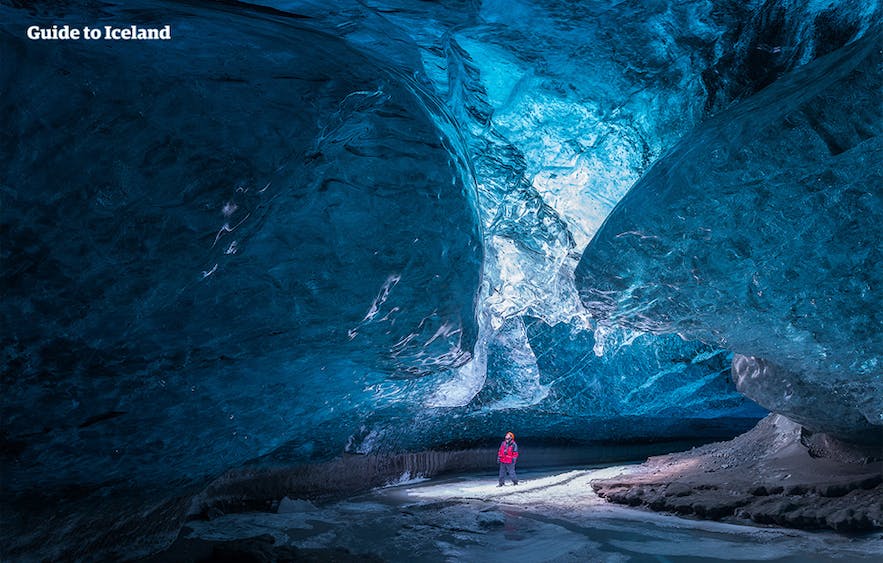 Ice caves are among the most breathtaking and thrilling wonders of the natural world and can definitely be ranked among Iceland's most awe-inspiring natural phenomena.

When you stand inside an ice cave you stand inside the glistening quiet blue of an ancient glacier; it is a place where time is frozen, the air stands still and each particle reveals something from the earth's past.

Iceland’s ice caves come into existence when the meltwater of summer creates subterranean glacial rivers that cut through the ice caps. When temperatures drop, and the rivers stop running, we are left with stunning ice caves of different shapes sizes and colours.

Each autumn, therefore, reveals new ice caves that are as precious as they are unique.

Iceland's ice cave season is winter time, from mid-October or November (depending on the operator) to the end of March, with the exception of two ice caves which can be visited year round.

What were your favourite activities and attractions in Iceland? Is there something we missed which should be included on the list? Let us know by posting a comment below!

When is the winter season in Iceland? What are the best things to do in winter in Iceland?  What winter activities can you join? Read this to find all…
Read more

All You Need To Know About Kayaking in Iceland

Where is it possible for guests to go kayaking in Iceland? Can kayak tours be combined with other activities, and what can you expect to see? Read on …
Read more
Guide to Iceland
Explore Iceland
Best of Iceland
The Ultimate Iceland Bucket List