10 Pictures of Iceland You Won't Believe Are Real

Have you seen the best of Iceland, including the sites that seem too amazing to be natural? How can you visit the places you’ve seen in images that have defied your belief? Continue reading to look over ten photographs of Iceland that are so awe-inspiring that you could be forgiven for not thinking them to be real.

Iceland is an incredible country full of beautiful landscapes that beg to be photographed.

Thankfully, Guide to Iceland’s own Iurie Belegurschi has captured most of the following images to reveal them to you (except the one from Silfra). You are welcome to use Iurie's photos in this article without charge for your website or blog; just make sure to link back to this page. 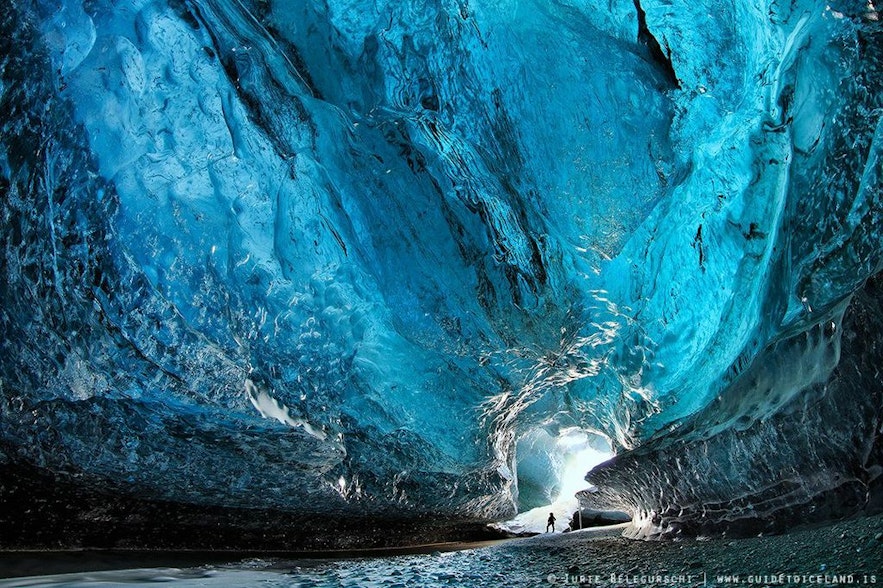 Iurie is world-renowned for his incredible landscape photography, but he is probably best known for his belief-defying images of ice caves. The phenomenon of an ice cave is every bit as beautiful as his pictures lead you to believe; the blues are as vivid, the textures as smooth, and the halls as vast as are depicted.

The most visited blue ice caves in Iceland are beneath Vatnajökull glacier in Iceland’s east, the largest ice cap in Europe, and are only reliably accessible in midwinter. Many ice cave tours run throughout this season, conducted by professional glacier guides, that will allow you to explore their incredible depths. Some run from mid-October until March, although many operators do not begin to run tours until November.

It is also possible to visit ice caves on Katla and Langjökull, although these lack the ethereal blues that make the Vatnajökull ice cave so supernatural. 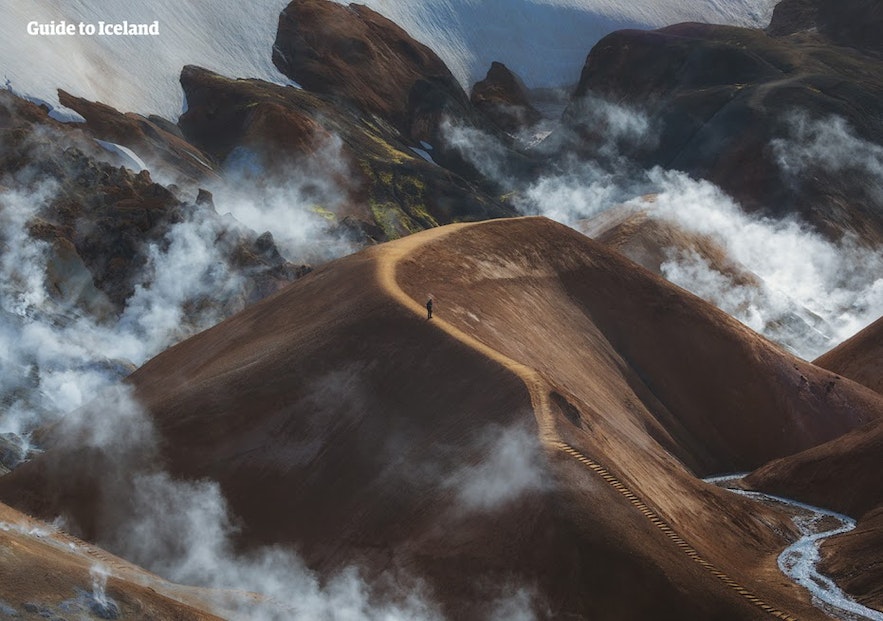 You could be forgiven for thinking that this image of the haunting beauty of Kerlingarfjöll, with the ominous steam rising up from the ground and a glacier in the background, was plucked from the floor of the special-effects studio of HBO’s Game of Thrones series as the breeding ground for dragons. You wouldn’t be far off; while multiple locations in Iceland have been used in the making of the popular TV series (although this one not being one of them, so far), no CGI effects were used in its creation; this is all natural, and an example of Iceland at its finest.

Kerlingarfjöll mountains are not a very popular stop, as they are located in Iceland's highlands and only accessible during summertime. That means that you could find yourself completely alone in this stunning location. Its location about halfway between Reykjavík and Akureyri if driving the Kjölur route means it is a great stop to stretch the legs of anyone on a summer self-drive tour.

One thing to note here is that although 4WD cars are recommended for all highland tours, it is actually possible to drive Kjölur in a 2WD - but it's gravel for most of the way and it will take you a while to reach your destination. 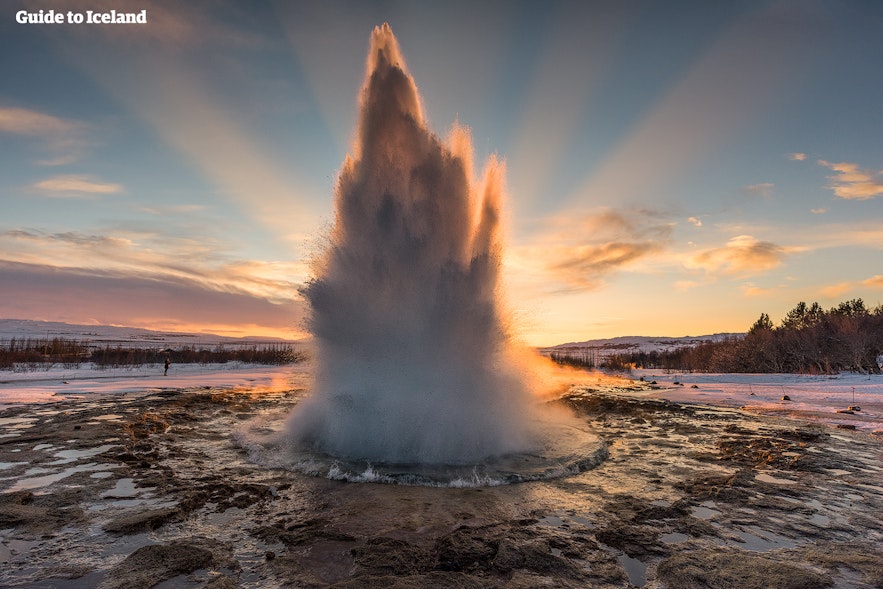 Iceland’s geothermal activity is fascinating and beautiful, but none of the features it creates are as dramatic as the geysers. Iceland’s geysers are so noteworthy that all of them in the world were named after this nation’s largest one, Geysir itself, which means ‘to gush’ in Old Norse.

This image, however, is of the geyser Strokkur, which goes off much more regularly than Geysir: every five minutes or so, to heights of around thirty metres. Iurie managed to catch it the moment of its eruption, and you will be able to get a similar image with a bit of patience and a quick shutter speed.

The Geysir Geothermal Area is one of three points on the Golden Circle, Iceland’s most popular tourist trail. There are many day tours to show you this route, which you can combine with activities such as snorkelling, horse-riding and snowmobiling. 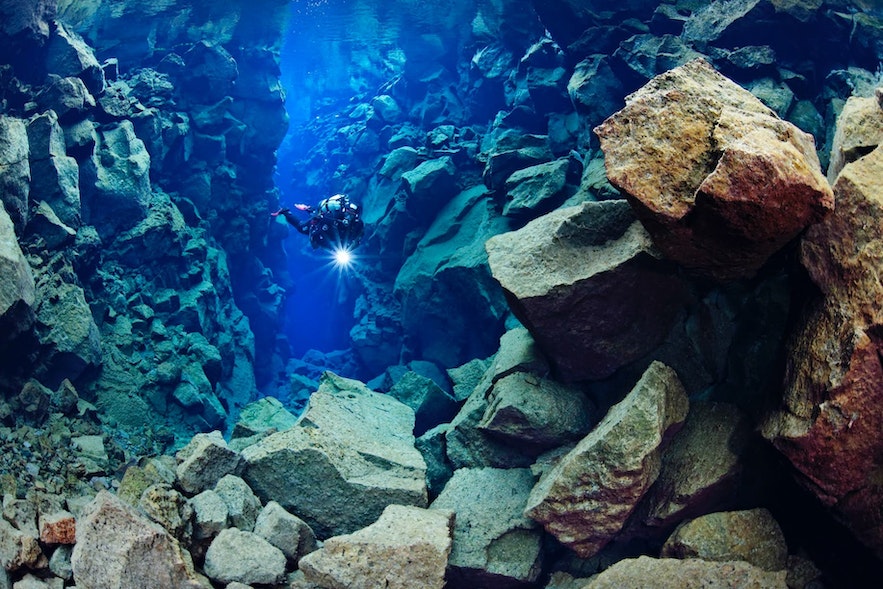 Iceland is a land overflowing with water: eleven percent of the country’s surface area is coated with glaciers, its waterfalls are numerous and well-known, and river systems snake all throughout the landscapes. At Þingvellir, however, water takes a unique form that is perfect for photography; it emerges in the ravines that run throughout the National Park from springs, unbelievably clear throughout the year.

The spring and fissure pictured here is Silfra, Iceland’s most popular snorkelling and scuba diving location. The visibility within is over a hundred metres, making it some of the cleanest naturally occurring water in the world (certainly that you can take a tour exploring anyway). The water is drinkable, but you should avoid approaching it unless on a sanctioned tour in protective equipment as it is just 2° Celsius year-round.

Þingvellir National Park is ripe for great photography, with its many ravines, lava fields, springs, and the lake Þingvallavatn, and a fascinating place to visit due to its history as the original site of the world’s longest-running, ongoing parliament. It is another point on the Golden Circle, with Geysir and the waterfall Gullfoss. 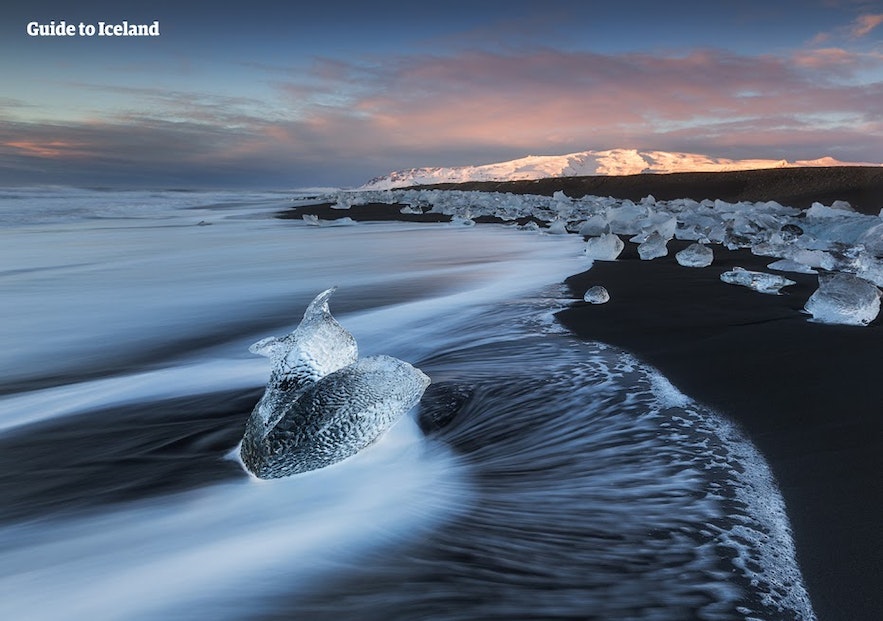 The Diamond Beach, or Breiðamerkusandur, is a place you can spend hours wandering in awe, marvelling over the icebergs washed along the black-sand shore. The contrasts between the whites and blues of the ice, the foaming surf, and the dark beach make for photos that beggar belief, such as this one, taken in winter.

The icebergs on the Diamond Beach come from the Jökulsárlón glacier lagoon, in Iceland’s south-east. This is one of the country’s most popular destinations for its unreal beauty and is included on many South Coast tours, particularly those that go over several days. 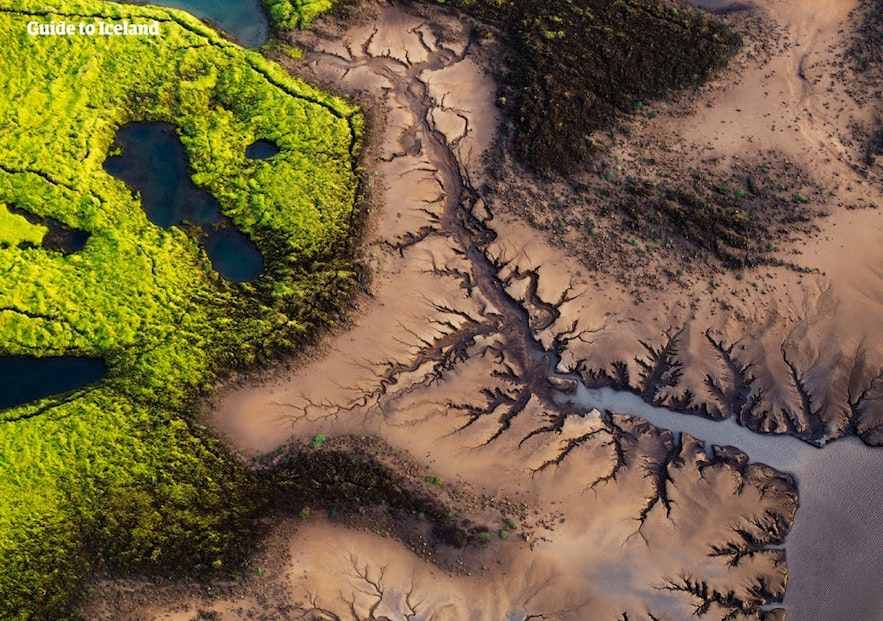 Iceland is a land of contrasts, best displayed in the magnificent highlands. This picture focuses on the contrast between the vividly coloured bright green moss as it meets the pink tainted sands, colours so intense that they seem painted. Here you can see the details of Iceland's fascinating nature, revealing how unusual its surroundings are.

For a shot like this, look up airplane tours or helicopter tours. 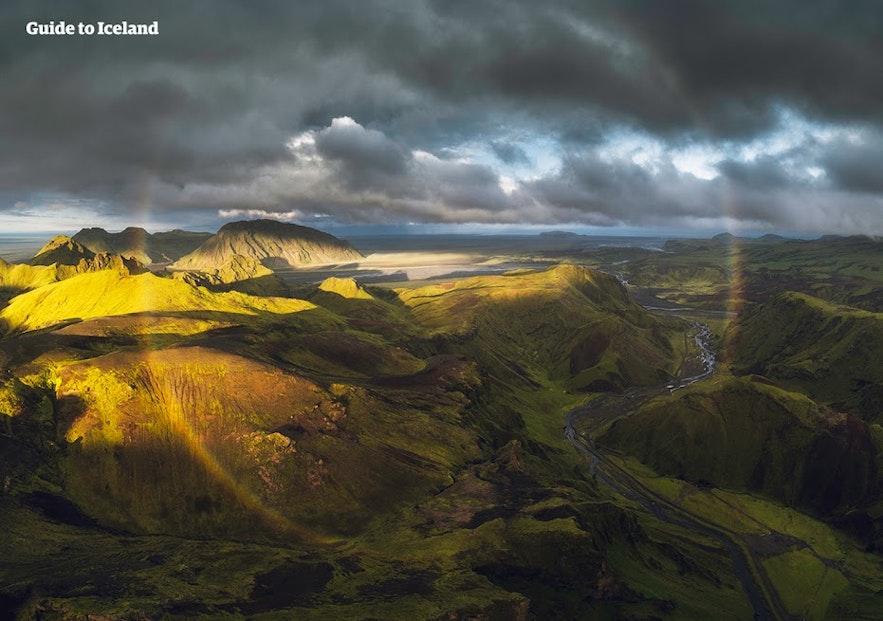 Rainbows are frequently seen in Iceland, due to the constant battle between the sunshine and the rain. The feature pictured here is a circular rainbow, above the gorgeous mountains surrounding Þakgil camping ground.

Þakgil campsite is on the South Coast of Iceland, a 14 km detour off ring road number 1 inland, the first road East of Vík (it's called Kerlingardalsvegur). It is accessible for all cars in summertime only, but the road is narrow, muddy and crooked and not recommended for low cars. 4WD cars are recommended, although not necessary. Even though the distance is only 14 km, you can expect to spend around 45 minutes driving this short distance - but the camping ground (and small huts) and the surrounding scenery is worth it for any avid hikers out there.

Þakgil is not included on any tours or domestic bus routes, so in order to get there, you will need to rent a car and drive there yourself. 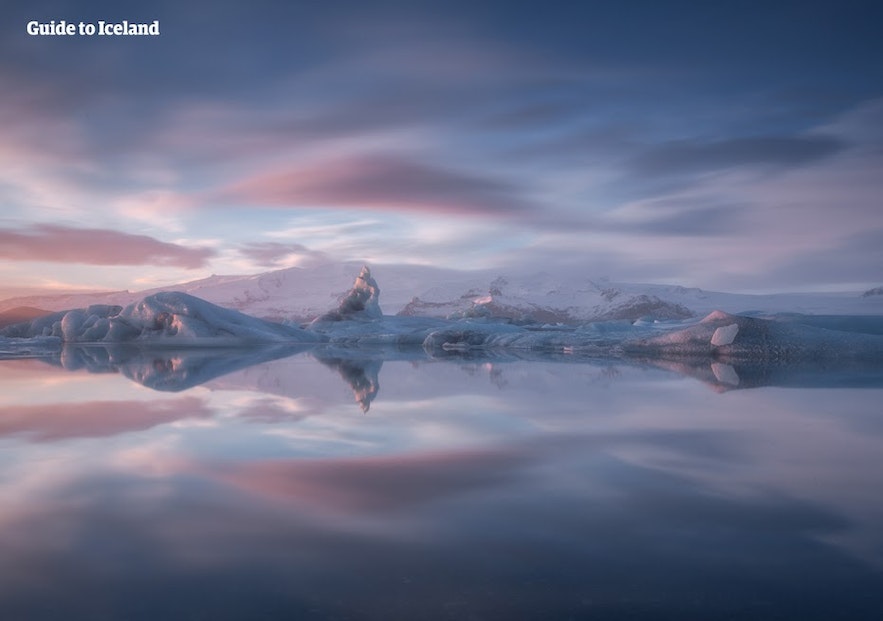 The Diamond Beach is an absolute wonder, but the sheer magnificence of the adjacent Jökulsárlón Glacier Lagoon just manages to best it. Icebergs breaking from the Breiðamerkurjökull glacial tongue cruise slowly across this vast lake, some towering to the heights of multi-story buildings. The way they drift and rotate is mesmerising, and this magic can be captured in photos such as the one above.

Those who seek to immerse themselves amongst the bergs can take an amphibious vessel into the lagoon throughout the summer months, and a zodiac vessel throughout October. 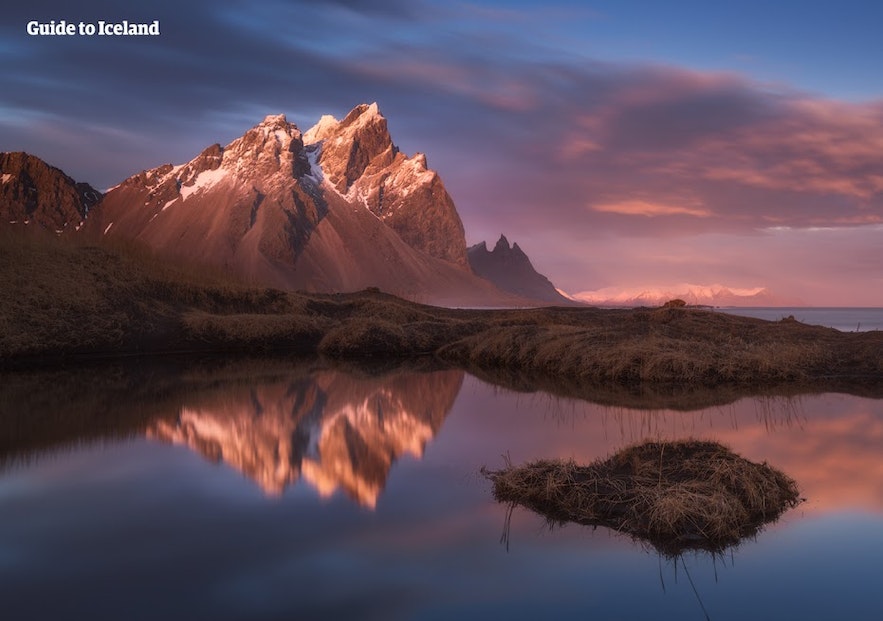 With its sheer sides, ominous colour and jagged peaks, Vestrahorn is another feature in Iceland that seems like it was plucked from a fantasy novel. It is, in fact, one of the very few gabbro mountains to be found in the country, standing tall and dramatic from a peninsula of black sands.

This magical image shows how talented photographers can use the effects of light, clouds and reflective surfaces to great effect. Iceland’s ever-changing conditions and wealth of natural phenomena mean that very rarely will two photographs of the same subject be overly alike.

Vestrahorn is near the town of Höfn in Iceland’s south-east, where many people taking a self-drive tour around the country, such as this one, will stay. 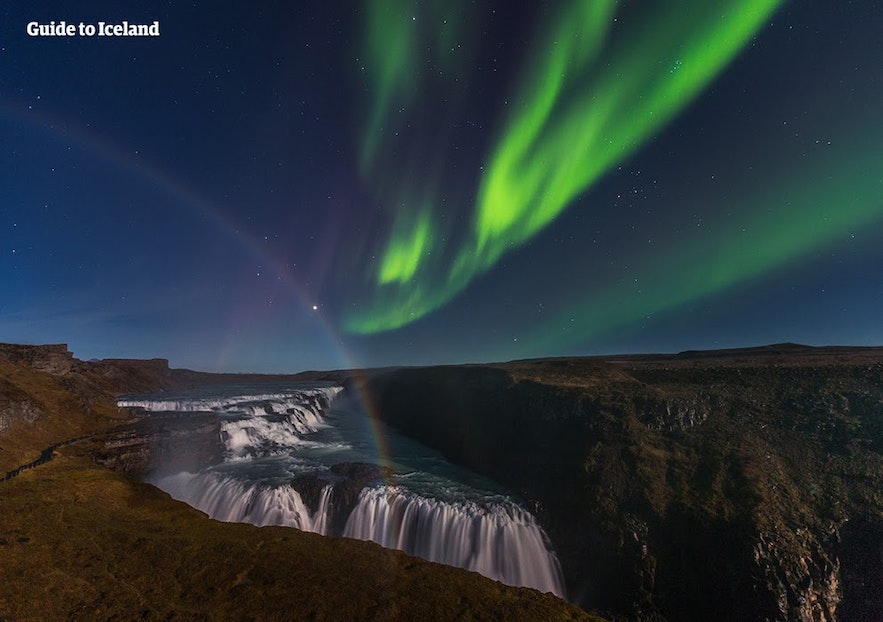 Although the winters are long and dark, with only around four hours of daylight in December and January, Iceland’s night holds many surprises. Although most come hoping for the northern lights, this picture shows that even with them, there's still enough light to catch a rainbow as well! The skies above this country hold an unreal amount of beauty, especially in areas with hardly any light pollution.

This shot is a feat of astrophotography that those with a decent camera they have a good knowledge of can emulate. By taking a northern lights tour, you will be guided by an expert in capturing the auroras on camera, and the skills you will learn also apply to catching the stars.

While photography at night in Iceland’s winter can yield incredible results, the long ‘golden hour’ that runs throughout the night in summer also provides some brilliant photographic opportunities. You can take workshops in either season to capture the landscapes under completely different conditions, with either a focus on photography under the midnight sun or of the land its winter colours.