Book this 9-day camping self-drive tour to explore the exciting Icelandic highlands!  This tour will delight anyone looking for a chance to disappear into the Icelandic wilderness, pitching a tent next to the glaciers and hiking the trails of our beloved forests. Camping is the best way to fully immerse yourself in nature and gives you the opportunity to enjoy this country for longer than you otherwise would, as it works within a budget.

You'll get a 4x4 Wheel Drive car including a roof top tent to drive the harsh terrain into Landmannalaugar and over the Kjölur highland road to the Kerlingarfjöll mountains. You can travel where the wind blows on a self-drive tour; there are no guides to worry about keeping happy.

Many of the gorgeous locations on this tour are only accessible during the peak of summer when the snow has melted, and the roads are open. The highlands are the least visited area in Iceland, leaving the terrain beautifully untouched!

For many travellers coming here, it's important to get a mix of famous attractions and secluded spots in the untouched landscape. There are many hidden gems around Iceland where you can be almost entirely alone in nature, and the itinerary you will receive after you book will help make sure that you don't miss them.

You'll also have the chance to drive Iceland's south coast and spend time in the vibrant capital, Reykjavík. And that's not all; you can add extra activities during the booking process to enhance your holiday. These include glacier hiking, snowmobiling and caving tours, as well as the opportunities to both descend into the colourful magma chamber of an extinct volcano, and enter a man-made channel carved into a glacier.

Immerse yourself in the wilds of Iceland on this complete camping tour! Check availability by choosing a date. 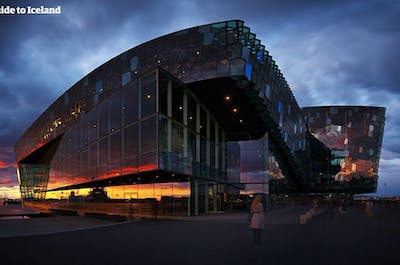 Pick up your 4-wheel-drive rental car from the international airport at Keflavík. This car is unique since it comes with a rooftop tent that can be quickly unfolded to spend the night wherever you are. Drive through the lunar landscape of the Reykjanes Peninsula to Iceland's capital, Reykjavík

You can then either explore the vibrant city or head your campsite in the nearby countryside-town of Þorlákshöfn. Whatever you choose to do, the endless summer day will make it that much more special. 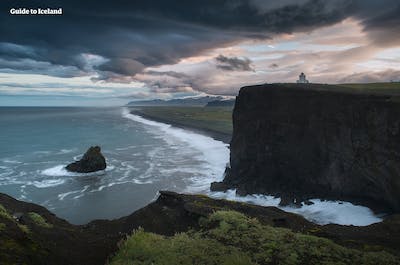 On day two, head out of the city and drive to the gorgeous nature on the south coast. As you travel towards Vík, you will want to stop at the stunning Seljalandsfoss falls, which you can walk behind for a unique perspective. Not far from Seljalandsfoss is another beautiful waterfall, Skógafoss, the spray of which, on sunny days, throws many little rainbows into the air.

Following the waterfalls, you will start to see some magnificent glaciers to your left. At Sólheimajökull, you can walk right up to the glacier tongue. If you want to walk upon the ice, however, you can opt into glacier hiking tour here, for some spectacular views and informative commentary from your guide; those who seek more of a thrill than an education can opt for a snowmobiling tour instead.

Towards the end of the day, you will come to the black sandy beach Reynisfjara with its impressive basalt columns and formations. You will spend the night in a campground in Vík, where you will have a view of the Reynisdrangar rocks, a pair of huge basalt sea stacks rising from the ocean, that have guarded Iceland's shores for hundreds of years. 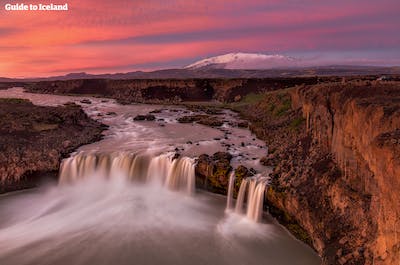 Day 3 - Day of the Waterfalls

On day three, you will backtrack a little to the town of Hella and from there go inland on a self-drive tour of some of Iceland's incredible waterfalls. While many guests only get to see Gullfoss on the Golden Circle throughout their entire stay, you will see Þjófafoss, Hjálparfoss, Stöng, Gjáin, and Háifoss all in one day. You can opt for an ice cave tour departing from Vík in the morning before you head on out to your waterfall adventure.

Each of these waterfalls has its own unique charm. Háifoss is the second tallest in the country, at 122 m (400 ft) and can only be reached with a 4x4. Þjófafoss, the waterfall pictured above, is right next to the mountain Búrfell, and provides you with an excellent view of the volcano Hekla in the background.

You will spend the night at a campsite near the village of Flúðir. 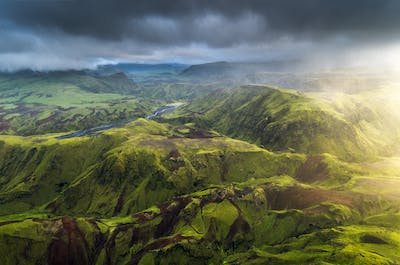 Drive into Landmannalaugar where you will be spending the day. This unbelievably beautiful highland area has incredibly colourful landscapes and a wide diversity of scenery. You'll see mountains in yellow, red, green and blue; black lava; green and grey moss; and azure rivers and lakes, some steaming with geothermal activity.

A wealth of hiking trails are in this area, and there are no roads to interfere with your enjoyment. This is one end of Iceland's most famous and popular hiking trail, Laugavegurinn, considered one of the most beautiful hikes in the world. Be sure to remember to bring your swimsuit for your trek, and you will find hot springs to bathe in, hidden in this unique landscape.

Leave Landmannalaugar in the late afternoon or evening to find a campsite in the area of Gullfoss waterfall and the Geysir geothermal area. 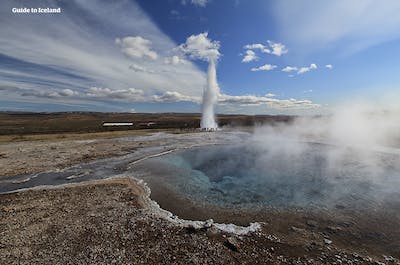 Today you will start with two of the three stops on the Golden Circle (you'll get to see the third a little later). The first, Gullfoss is by many considered Iceland's most beautiful waterfall, as it thunders down in two steps into an impressive gorge. The upper stage is 11 m (36 ft) tall, and the lower one is 21 m (69 ft) tall.

From Gullfoss, you can opt for a snowmobiling tour on Langjökull glacier where you race across the white expanse, breathing in the fresh mountain air and feeling the adrenaline surge through your veins.

Next, you will head to the Geysir geothermal area. Strokkur is the active geyser here, spouting boiling water 20-40 m (65-131 ft) into the air every few minutes. It's right next to Geysir, the first geyser named in Western literature, and which gave all others their name. Currently, it is not very active, but the surrounding geothermal area is anything but dull with hot springs, mud pots and steaming vents.

You'll spend the night at the campsite near Geysir, but before you head there, you can do a little more exploring. You'll have a choice of travelling around the Golden Circle, visiting places such as the bright red Kerið crater lake, the small but charming waterfall Faxi, and the historical church Skálholt.

You could also choose to head out onto the Kjölur Highland road to explore the beautiful Kerlingarfjöll, a stunning highland area that's reminiscent of Landmannalaugar, full of colourful mountains and hot springs. You'll then return to the Geysir campsite in the evening but you could also leave your Highland visit until morning. 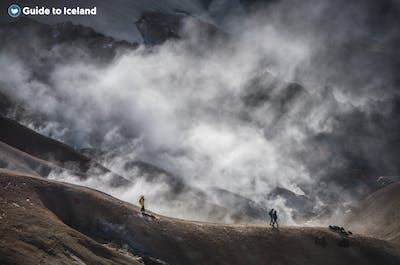 Start the day by heading into the Highlands. Whether you visited the Kerlingarfjöll area yesterday or not, you should still stop there and explore a bit further. If you wish, you could take a hike up to the roots of a glacier.

After taking in the beauty of the Kerlingarfjöll, continue towards another hot spring area, Hveravellir where you'll see colourful sinters, smoking fumaroles, hot springs, and a geothermal hot pool. There are many excellent hikes to be had, and some beautiful vistas to be seen.

Once you have fully enjoyed the region, continue your drive towards the village of Skagaströnd in northern Iceland, where you will spend the night. 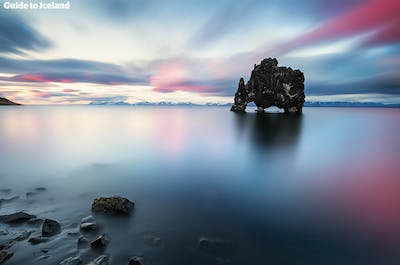 On day seven, you will drive along Vatnsnes peninsula, which is Iceland's number one seal-watching location. Along here, you'll get a great view of the rock Hvítserkur. Hvítserkur is only 15 m (50 ft) tall, but striking nonetheless. It's a monolith that resembles an animal; most people think of an elephant taking a drink.

Continue south past Bifröst University and visit Deildartunguhver, Europe's highest flowing hot spring. Waterfalls and volcanic craters dot the road along the way, providing many perfect places to stop and stretch your legs.

Not far from Deildartunguhver are the stunning Hraunfossar and Barnafoss waterfalls. They are located right next to each other, but each has its own unique beauty. You'll spend the night at the campsite of Varmaland, is near the historic Reykholt area. 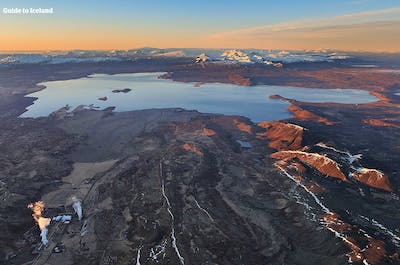 Drive along Kaldidalur valley, an interior route renowned for its haunting beauty. On this day, you can head to one of three activities; you can go caving in the fascinating Viðgelmir lava tube, or else explore the stunning insides of Langjökull glacier, through recently constructed man-made channels. You can also descend into the magma chamber of the sleeping volcano Þríhnúkagígur, a truly once-in-a-lifetime experience.

Following this, head Þingvellir National Park, Iceland's a UNESCO World Heritage Site and the third and final stop on the Golden Circle. Here, you can literally walk between the North American and Eurasian tectonics plates. You can also explore this site to learn about Iceland's fascinating history; it was here that early settlers founded the nation's first representative parliament, and also where Icelanders converted to Christianity and declared their independence from Denmark.

Afterwards, you'll return to the campsite in Þorlákshöfn village where you'll spend the night. 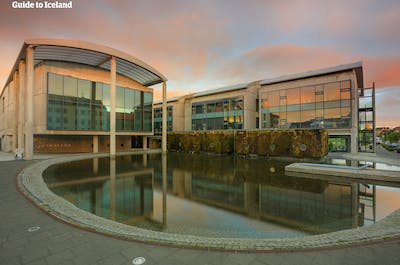 Day 9 - City of Reykjavik and Departure

For those who have a later flight and choose to visit the Blue Lagoon today, you will finish off your stay unwinding before you head to the airport. This is the perfect place to relax as you bathe in the warm, mineral-rich waters as you look back on the incredible adventure you have just taken in the land of fire and ice. If your flight is later there are plenty of things to do in Reykjavik.

Mix with the locals, try one of Reykjavík's many swimming pools, get a view of the town from Hallgrímskirkja church tower, check out the street art, visit museums or galleries, and admire the architecture of this unique capital. If you have an early flight back home, we wish you a pleasant journey.

The vehicles offered for our self drive camping tours are highland capable and equipped with a roof top tent and necessary camping equipment suitable for two people. They come with Wi-Fi and CDW insurance.