Explore Iceland’s most beloved sightseeing routes with this two-day tour out of Reykjavík. This is a private tour, so you are guaranteed a personalised experience, without having to worry about other guests. This excursion takes you to the Golden Circle and South Coast, and should not be missed by those seeking to explore Iceland’s most famous sites.

The tour begins when you are picked up by your friendly guide in the capital in a minibus and are whisked out to the Golden Circle where you will see geysers erupt at Geysir geothermal area, the stunning waterfall Gullfoss, and the historical Þingvellir National Park.

After a thrilling day of sightseeing, you’ll retire at a private, countryside accommodation with a hot tub, once again guaranteeing that you won’t be surrounded by other tourists. You’ll then set out on your second day to explore the many wonders of the South Coast such as the waterfalls Seljalandsfoss and Skógafoss, and the black sand beach of Reynisfjara.

Don’t miss this essential tour around some of Iceland’s most famous sites. Check availability by choosing a date. 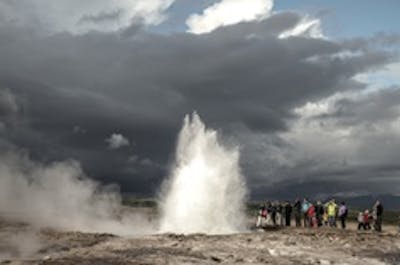 On day one, your guide will pick you up from the airport or at your residence in Reykjavík, and take you to the Golden Circle. You will take this route in a slightly unconventional way, to avoid the majority of the crowds, starting with the Geysir Geothermal Area.

As can be guessed by the name, this valley is home to geysers, most notably Geysir (the namesake of the phenomenon) and Strokkur. Geysir is no longer notably active, but Strokkur erupts many times an hour, often higher than 20 metres.

You will then go to the Golden Waterfall, known locally as Gullfoss. Gullfoss is a stunning and iconic feature, that in summer is renowned for the rainbows arching from its spray. In winter, meanwhile, ice cakes the rocks that surround it.

Before heading to the third and final site of the Golden Circle, you will stop at the Friðheimar Tomato and Horse Farm, to see how Iceland grows its own food. Then you will head to an old powerplant, a volcanic area, and finally to Þingvellir National Park.

The only UNESCO World Heritage Site on the Icelandic mainland, Þingvellir, achieved its acclaim due to its fascinating history as a birthplace of modern democracy. It is also incredibly beautiful, located between two tectonic plates and defined by springs, forests and lava fields.

You will retire for the night in private accommodation with a hot tub on the veranda. 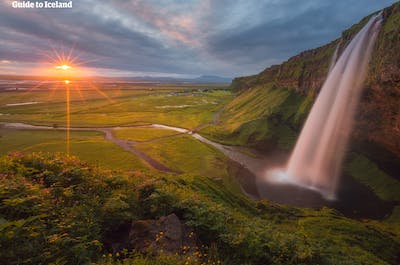 Day 2 - The Beautiful South - A Glimpse of Iceland

You’ll set off on day two to start exploring the wonders of Iceland’s South Coast.

You will begin by visiting Seljalandsfoss, the waterfall famed for having a path that allows you to fully encircle it in summer. Next up is another beautiful falls, this one called Skógafoss, which is much wider and more powerful, and associated with some fascinating folklore regarding hidden treasure.

You’ll then come to the Dyrhólaey cliffs and rock arch. This is a dramatic and beautiful area, with the rock arch curving out into the ocean with a gap large enough for ships to sail through. In summer, this is one of the best birdwatching places in the country, most notably for puffins from May to September.

Next is Reynisfjara, a black sand beach renowned for its powerful, crashing waves and spectacular geological features. Most noted amongst these are the basalt sea-stacks (or, according to folklore, frozen trolls) of Reynisdrangar.

After this exciting adventure, you’ll be returned to Iceland’s capital city.