Discover the hidden gems of southern Iceland with this two-day tour to hot springs, beautiful waterfalls and turf houses. Those wanting to spice up their holiday with an excursion to off-the-beaten-path locations on the edge of the Highlands should not let this opportunity pass them by.

You'll meet your guides at a lovely country home close to the Golden Circle sightseeing route and the waterfall Seljalandsfoss. If you wish, you can add on a pickup from Reykjavík or the South Coast during the booking process, as well as a drop off to either location, allowing you to either begin or end your journey around Iceland with this tour.

You will then spend your first night unwinding in the home's hot tub, preparing for an active day that lies ahead. On your second day, your adventure off-the-beaten-track starts with a super jeep tour and a dip in a natural hot spring!

From there you will visit stunning waterfalls, historical turf houses, and a gorgeous valley. Fans of the HBO series Game of Thrones should not forget their camera as many of the beautiful places you will visit have also been used as a backdrop in the series.

If you'd like to relax after your adventure, you could add on an extra night at the country home that includes both dinner and breakfast the next morning. 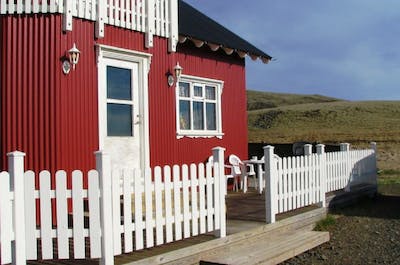 Now it is time to begin your adventure.

The first stop of the day is the small, geothermal, natural hot pool near Flúðir called Hrunalaug. It is a beautiful hot spring that holds a perfect bathing temperature the whole year. Make sure you bring your bathing suit today, as you can take a dip and unwind in a beautiful setting. After you the soak, you will head off to the farm Stöng.

When the volcano, Hekla, erupted in 1104, farms in over 70 km radius got destroyed, one of them was Stöng. However, in 1939, over eight centuries later, a team of Nordic archaeologists decided to excavate several of these farms, including Stöng. That farm was exceptionally well-preserved because it had been newly built at the time of the eruption. At the farm, you'll get an insight into the daily lives of the Icelandic people of old.

Then you will drive along the river, Rauðá, and stop at the stunning Gjáin, a beautiful valley with waterfall, ponds, and volcanic rock structures. You will walk down the valley, enjoy the spectacular view and maybe dip your toes in the river. Game of Thrones fans might want to bring their camera, as it is here where The Hound teaches Arya how to use her sword.

After taking a lot of stunning photos of this fantastic nature, we will step again into the super jeep and head off to Háifoss, the second highest waterfall in Iceland. The river Fossá drops from a height of 122 metres, creating this stunning feature. Háifoss has a neighbouring waterfall called Granni (the name literally translates to 'Neighbour'), and seeing them both cascade down the cliff side by side is truly is a phenomenal sight.

Next up is Þjóðveldisbærinn, a reconstructed turf farm that is based on the farm Stöng. In the summertime, you can go inside, take a look and see the benches, vats, platform and the long hearth. The farm was built in 1974 to celebrate the 1100 anniversary of the Settlement of Iceland. The farm was the setting of a brutal scene from Game of Thrones where Wildlings attacked the inhabitants.

Before you return to Knarrarholt, you will visit the waterfall Hjálparfoss. It is a two-stepped waterfall near the longest river in Iceland, Þjórsá. The river is 230 kilometres long and has its source on the glacier Hofsjökull.

Back at Knarrarholt, you'll bid farewell to your guide and continue exploring Iceland, unless, of course, you added an extra night during the booking process. In that case, you'll have another night to relax in the hot tub in the unspoilt nature.

Please note that a minimum of 4 people at winter time but minimum of 2 people at summer time is needed to book this tour.